"I know it’s gonna be a great fight, and I wouldn’t be surprised if we both got Fight of the Night." - Walel Watson 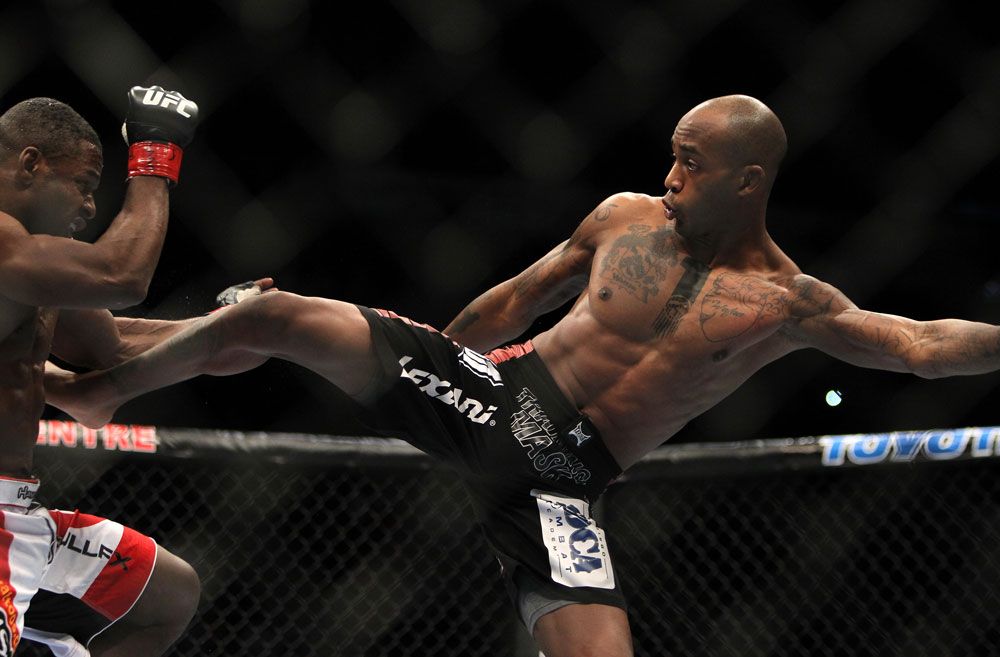 As he prepares for his first trip to Toronto since his razor-thin split decision loss to Yves Jabouin in December of last year, Walel Watson isn’t concerned with the judging in the Great White North. Well, not exactly.

“Honestly, I’m concerned about the judges everywhere – in Toronto, California, it don’t matter where we’re at,” said Watson. “From what I’m seeing in the last couple years, those judges will hurt you and they’ll break your heart. I’m not worried about Toronto; I’m just worried about going in there and doing what I want to do and what I love to do is finishing fights.”

Losing a close one will do that to you, but Watson – who faces Mitch Gagnon in a UFC 152 preliminary bout this Saturday – has never been one to sit around for three rounds and hope for the best. And that’s not just talk, as his first 11 bouts – win or lose – were decided by the guys with the gloves on, and not the judges. And though he’s gone the full 15 minutes in his last two (losses to Jabouin and TJ Dillashaw), it’s not a moral victory for him to prove that he can last until the final bell.

He certainly looked the part in his debut UFC win in October of 2011, as he needed just 77 seconds to dispatch Joseph Sandoval. And the Jabouin fight, regardless of the outcome, was nothing to be ashamed of, as he and the Canadian standout went at it hard for three rounds, thrilling fans with a high-level of striking expertise. In the fighting lexicon, that’s a loss that was a win at the same time.

But in February, everything went wrong in his lopsided shutout loss to Dillashaw. Unable to stop the Team Alpha Male standout’s takedowns and equally frustrated in his attempts to get up from the mat, Watson’s fourth pro loss may have been his most painful. Seven months later though, “The Gazelle” has moved on.

“That’s why they call it a career,” he said. “You’re always going to have your ups and downs. Some nights are gonna be yours, some nights aren’t, and unfortunately whatever I did that night, it wasn’t working out for me. I make no excuses. So many times fighters lose and they say this happened and that happened, but it just wasn’t my night. He was the better man that night, it’s a fight, and someone’s gonna lose. I believe if me and him ever meet each other again, the result won’t be the same though.”

His reasoning behind that last statement is simple: he knows what he did wrong, and he’s done everything in his power to make sure it never happens again.

“I think that night, TJ messed up and woke a giant,” said San Diego’s Watson. “Since that day I haven’t stopped wrestling and the next time I meet a wrestler, the results aren’t gonna be the same.”

It’s the harsh reality of life in the UFC. What may get you through life on the local circuit may not always get you through on the elite level, and if you have a weakness, someone is going to find it sooner or later. Watson admits that while his striking was solid and his jiu-jitsu game accounted for the majority of his wins, wrestling was something he didn’t always focus on.

“I really did neglect it in the beginning of my time in the sport and I relied on my jiu-jitsu,” he said. “I was like ‘well, if you don’t want to stand with me, I’ll just submit you.’ But if you have great wrestling like TJ did and you’re able to take me down and get into side control and be in a dominant position, it really makes it hard to use my jiu-jitsu and it nullifies it. So if I can make the job harder to take me down, I’m really gonna have a better chance to submit you when we hit the ground…if it hits the ground.”

That possibility makes Saturday’s bout with Gagnon intriguing. The Ontario native has scored all eight of his pro wins by submission, but in his July loss to Bryan Caraway at UFC 149, he showed some impressive power during his ground and pound assault of his opponent. Gagnon’s downfall in the Fight of the Night bout was his cardio, as Caraway rallied and submitted him in the final round. Watson likes to set a fast pace and with Gagnon doing the same, it could produce fireworks in Toronto.

“I see a great fighter and I see a fighter’s fighter,” said Watson of Gagnon. “He comes out and he fights. He’s not looking for the easy way out. He’s throwing big shots and being exciting, and if he does take you down, he’s not trying to lay and pray and hope the rounds get over with; he’s trying to smash your face or submit you, and I love that in a fighter. I know it’s gonna be a great fight, and I wouldn’t be surprised if we both got Fight of the Night.”

If they do, it would be Gagnon’s second such award in two UFC fights. It would be Watson’s first, but the only “1” he wants to leave with this weekend, is on the front end of a 1-1 record in Canada. Then, with a 2-2 UFC record, he can get back to the business of beginning a run for a shot at Dominick Cruz’ bantamweight title, and with the champion currently sidelined by injury, it’s the perfect opportunity for Watson and the other prospects at 135 pounds to begin making their move up the ladder.

“With the standstill at the top, I see it as an opportunity for me to climb up there now, and hopefully by the time Dominick’s back, I could be right there in the top three, top four of title contention,” said Watson, who has come a long way from the days when he thought his pro sports career would take place on the football gridiron, and not in the Octagon.

He has no regrets.

“I’m living my dream,” said Watson, a former wide receiver, cornerback and special teams return man in junior college. “Whether I knew it in the beginning of my life or not, this is my dream to be on the biggest stage and to compete in the Octagon. I feel like I was born to really do this and I just didn’t know that throughout my life because I was chasing my other dream, trying to become a professional football player. Even watching football it’s not the same anymore. My passion for MMA is so deep that I feel like I’m embedded in it now – this is all I want to do, it’s all I want to watch, it’s all I want to study.”