Walel Watson - Leaving The Judges Out of It

"I’m not just fighting for the fame or for the money; I’m fighting to be the best." - Walel Watson 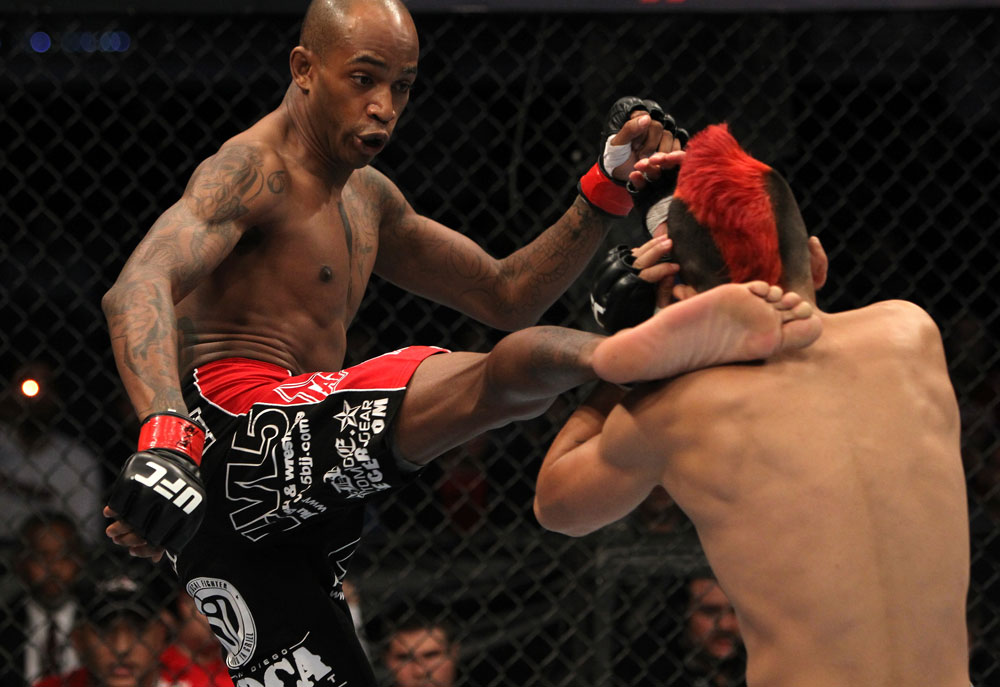 Through 11 pro mixed martial arts bouts, the one certainty about a Walel Watson fight was that it was going to be finished. Win or lose (but mostly win), “The Gazelle” made a concerted effort to take enough risks to ensure that either he or his opponent wouldn’t hear the final bell.

Then came fight number 12, an exciting UFC 140 scrap with Yves Jabouin in Toronto. That one went the distance. That one also handed Watson his first Octagon defeat, via split decision.

“From now on, I’m finishing fights,” said Watson, whose emotional reaction to the loss could be seen on UFC President Dana White’s post-fight video blog. “I’ve got great coaches, and we sat down, watched the film, and they showed me where my mistakes were in that fight. There were little things where a judge could see it his (Jabouin’s) way, and one judge could see it my way, and what that taught me is that I just can’t leave it in the judges’ hands. That was the first time I left it in the judges’ hands, and I paid for it and I’ll never do it again.”

As with any split decision, the MMA community is divided as well, with just as many believing Watson deserved the verdict as those who thought justice was done that December night. It was little consolation to the affable Watson.

“At this point in my life, the money isn’t what I’m all about,” he said. “What hurt that day the most was that now I’m 1-1 (in the UFC) instead of 2-0, and that set me back maybe a year or two years from the belt. That’s what hit me the most when I walked out of the Octagon that night.”

The funny part about the whole thing is that against Jabouin, San Diego’s Watson got exactly the fight he wanted: a standup battle in which both men fired off their best stuff at each other for 15 minutes. That’s usually not the case.

“It’s something I’ve had to deal with my whole career, being a 135er and being 5-foot-11,” he said. “The minute I step in the cage or the Octagon, people are like ‘nah, I’m cool; I’m not striking with this guy.’ (Laughs) In the Yves fight, it was the first time I had a guy willing to strike with me and I got sucked into this striking match where he punches, I punch back, and we’re just going back and forth, instead of having that killer instinct that I usually have because a guy’s trying to take me down and beat me up.”

So, in other words, he was having too much fun.

“I was having fun,” he smiles.

Luckily, the loss was the kind of defeat that hurts your pride and your wallet, but not your standing among the fans or the organization. Case in point, Watson’s return this Wednesday against The Ultimate Fighter 14 finalist TJ Dillashaw won’t be on the preliminary portion of the UFC on FUEL event, but on the televised main card. And that’s just where the former wide receiver and cornerback wants to be. As former NFL receiver Keyshawn Johnson used to say “Just give me the damn ball.”

But if there’s a downside to Watson’s rise, it’s that after knocking out Joseph Sandoval in 77 seconds in his UFC debut and thrilling fans in the Jabouin bout, he’s not going to be able to sneak up on anybody anymore.

“I still think I have some sneaking up to do because people are still doubting me and there are people out there that don’t believe in me, so I have to show them and make them believers,” said Watson, a pro since August of 2008 who has shown not an ounce of the UFC jitters associated with a rookie’s early bouts in the Octagon. Yet as he admits, he does a good job of hiding them.

“There’s always jitters; I just suppress them,” he said. “Once I know the jitters are there, I know I’m still alive, I’m still a human being, and those things allow me to know that I still have human emotions and I’m not a robot and I don’t think I’m the baddest thing walking around. I still have fear and I still get nerves. It’s how to control them and how to make them work for you.”

The 27-year old sounds like he’s got everything together, not always an easy feat when you go from building your career mainly south of the border in Mexico to the biggest event in the world. But what aids Watson is that his reason for being here is not for fame and fortune (though that would be nice), but for something bigger than that.

“I’m not just fighting for the fame or for the money; I’m fighting to be the best,” he said. “I want that 135 belt. I think about it, I dream about it, and I want it so bad. That’s what drives me every day, no matter what. It makes me work harder than I’ve ever had to work in my life. Every day, no matter how I feel, no matter how sick, sore, or hurting I am, I work to be the best, and that’s what I want more than anything.”

This week’s recipient of all that work will be Dillashaw, a fellow bantamweight prospect who fights out of the Team Alpha Male camp in Sacramento.

“I see an awesome wrestler, but I also see a guy that doesn’t respect me,” said Watson. “He thinks he’s just gonna go in there and ground and pound me out, as he keeps saying, and I think I’m gonna have to show him something else.”

Watson’s striking, aided by his height and reach advantages, is a cause for concern for any bantamweight though, making the idea of an immediate takedown an attractive one. Watson isn’t concerned at the moment though.

“I look at it as more of a blessing, rather than a curse, because I feel that especially once my wrestling gets better – and I’m working on it every day – that I’m going to be able to dictate the fight no matter what,” he said. “I can pick you off standing up, and soon my wrestling’s going to be real vicious and you’re not going to take me down. So what are you gonna do when you’ve got a 5-11, 135-pounder standing across from you in that Octagon? You’re not gonna do much.”

Welcome to the bantamweight division, a weight class that has hit its stride, producing fighters that are not only technically sound, but exciting as well. Sounds like it’s going to be a good year for Watson and company.

“I feel like the new guys that are here, none of us are point strikers,” he said. “We’re all real guys that want to fight. That (Mike) Easton-(Jared) Papazian fight was awesome, and everyone says we don’t have power and we don’t have this - what do you mean, those guys were going at it. I’ve knocked somebody out, I’ve seen several knockouts in the bantamweight division, and this new group of guys that’s coming in, we’re exciting and we’re not your traditional guys.”

As for his personal journey, Watson is optimistic that his loss to Jabouin won’t be repeated anytime soon.

“I’m fighting here, I hope I’m fighting two months later, and I just want to keep fighting every two months, God willing,” he said. “I pray that by January of next year, I’m fighting for the number one contendership and I’m gonna do everything I can to put myself in that position.”