Wake Up, Luke Rockhold is Here

"I’m getting deadly good and I’m finding my power from every strike and every angle, and Bisping’s going to feel everything from everywhere." - Luke Rockhold 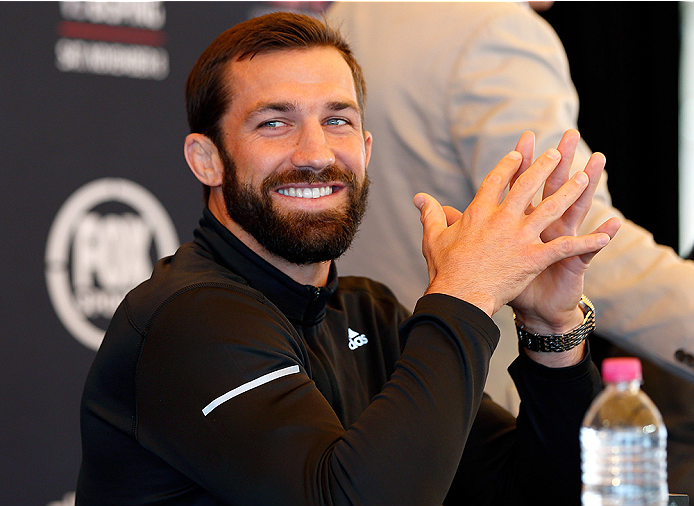 Luke Rockhold doesn’t like Michael Bisping. He’s made that more than clear over the last few months, maybe even longer. But man, the former Strikeforce middleweight champion really doesn’t like Vitor Belfort.

“I don’t like the guy,” Rockhold said of “The Phenom.” “I don’t like what he does and how he carries himself, what he says, or anything that comes out of his mouth.”

Why talk about Belfort, who handed Rockhold his lone UFC loss in May of 2013 when he’s fighting Bisping tonight in the UFC Fight Night main event in Sydney? Well, it all has to do with getting too emotionally invested in a fight, a big risk considering the animosity Rockhold has for “The Count.” But the Californian guarantees that he won’t fight Bisping like he fought Belfort.

“That was a great learning experience for me,” he said of the Belfort bout. “I fought with a lot of emotion in that fight, which was something I never did before and I know I’ll never do it again. Everything in that fight was pissing me off. I took it personal, and it was a wake-up call for me and probably the best thing to ever happen to me in my career.”

He may be right. Since then, Rockhold – who made his bones as a world-class middleweight during his Strikeforce run – cemented his place among the elite with a first-round knockout of Costa Philippou in January and a first-round submission of Tim Boetsch in April. And the scary part is, he insists that against Bisping he’ll be even better.

“I fought a good striker in Costa and I was able to land some good strikes and show some stuff,” he said in assessing his 2014 thus far. “I haven’t showed my jiu-jitsu in a while and I showed that against Boetsch, but when it comes to my full striking arsenal, it’s getting really, really good and I’m sitting on my punches. I was always tough and pretty decent on the feet, but I’m getting really good now – I’m getting deadly good and I’m finding my power from every strike and every angle, and Bisping’s going to feel everything from everywhere.”

Currently ranked fifth in the world at 185 pounds, Rockhold may be fighting someone below him in the rankings in Bisping, who sits in the number nine slot, but that’s of little concern to him because not only is this a chance to settle a score with the brash Brit, but to also get that big name on his victim’s list as he begins to make his case for a shot at the title.

“It’s a great opportunity for me to shut his mouth,” Rockhold said. “He’s a guy I’ve been wanting to beat up for a long time, and stylistically it’s a great matchup. So he’s a big name, and stylistically I believe I can put on a performance that’s really gonna show how much I’ve improved and what I’ve been working on. I’m going to show some things in this fight that nobody really has seen yet. I’ve evolved a lot and I’m gonna show a lot of weapons and prove a lot of people right and I’m gonna wake up a lot of people. It’s a great fight for me.”

Usually, you can sense when a fighter doesn’t believe what’s coming out of his mouth or if there’s a slight touch of doubt heading into a fight. That’s not the case with Rockhold, who truly sounds like a man on a mission. And though there’s always that chance of negative emotion throwing fight night into upheaval, you get the feeling that Rockhold is enjoying the idea of fighting someone who is going to make him angry, unlike Philippou or Boetsch.

“I don’t like Bisping, and I really don’t need much motivation to get up every day and try to better myself as a fighter, but it’s definitely nice knowing that Bisping is gonna be on the other end of it this time,” he said. “It’s not about beating Bisping though; it’s about being the best fighter in the world. Turning 30 makes you realize what you really want in life and how much time I have. The next five years, these are the best years of my career, and I’ll be in my prime athletically and technically, so I’m really looking to be the best fighter I can possibly be, and doing everything to do that. Now is my time, and this is a great opportunity for me to prove myself as the best fighter in the world. I’m going to make a big statement in this fight. If I haven’t already in the last two, I plan on turning a lot of heads in this fight.”

Turn enough heads, and he could find himself in a title fight sooner rather than later. Of course, Chris Weidman and Belfort are fighting for that championship at UFC 184 in February. Rockhold has wanted nothing more than to get another crack at Belfort. Could he actually be cheering for the Brazilian to beat Weidman early next year?

“No, no, no, definitely not,” he laughs. “It would be pretty sweet to catch Vitor and take it from him, but I wish Vitor nothing. He deserves nothing but to get beat. Weidman’s a good guy and the better fighter and I think he’s going to get the job done.”

Rockhold feels the same way about his chances against Bisping tonight.

“I think this fight is gonna make a big mark, especially the way I plan on doing it,” he said. “I think I can go out there and put on a show-stopping performance. And we’ll see what they say (about a title fight). I beat some good guys, but in reality, I think one more wouldn’t be bad. I want to prove myself as the number one contender.”