The Wait is Over - Rashad Evans is Back 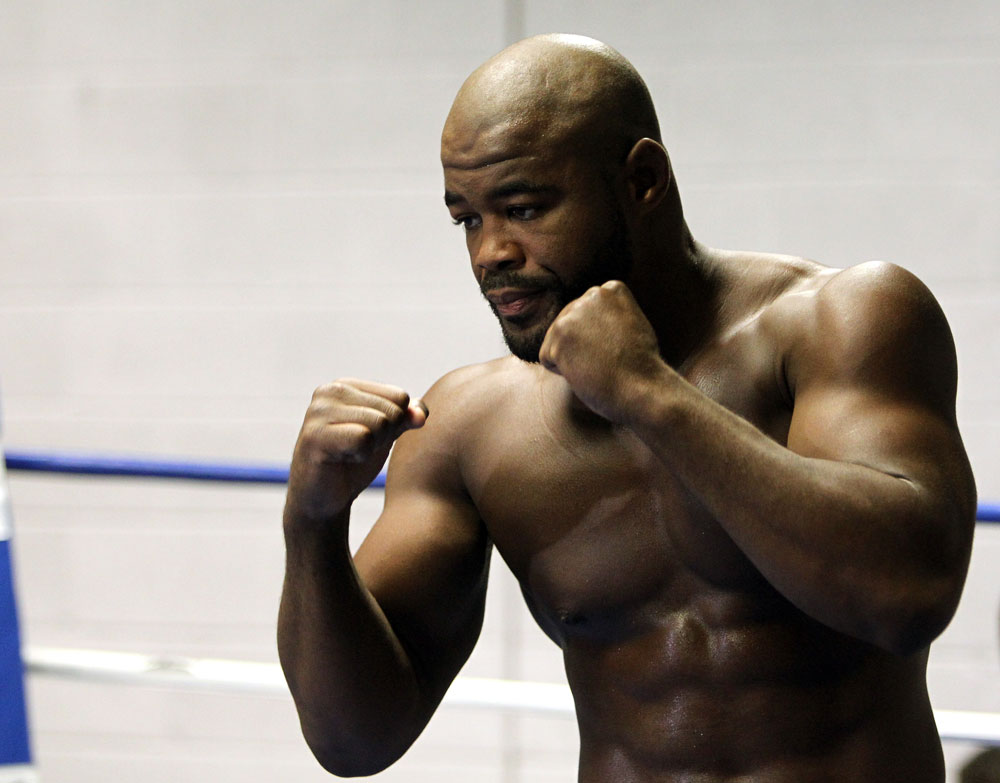 Rashad Evans hasn’t set foot in the UFC Octagon for over a year, but if you’ve been on the internet for any length of time, it’s almost like he’s never left. That’s a testament to the former light heavyweight champion’s star power that he’s remained in the public eye in the time since his May 2010 win over Quinton “Rampage’ Jackson at UFC 114, but it’s also a product of an almost never-ending series of events that have comprised mixed martial arts’ version of an afternoon soap opera.

Whether it was the knee injury that forced him from a UFC 128 title fight against “Shogun” Rua, his feud with the man who replaced him against Rua, current 205-pound champ Jon Jones, or his subsequent split with the Jackson’s MMA camp, Evans has not lacked for attention over the last 15 months. So how does he cope with the constant stress?

With a smile, of course.

“I guess smiling and laughing has been my gift to just really not take things too serious and don’t get so caught up in the identity of the fighter that you forget about who you are and allow this to really affect you in your personal life,” he said. “It is trying and it is tough because I want to be the champion and I do want to fight for the belt, but at the same time, I have to put that on the backburner just so that I save something for me and who I really am and I don’t get caught up in the whirlwind of everything else that happens that comes along with the sport.”

And no whirlwind could compare to the hurricane that broke out when he and Jones, former training partners, took aim at each other. It’s a sudden rivalry that took on a life of its own, with neither fighter willing to back down. And while the older Evans thought about stepping back from the increasingly personal warfare, that idea didn’t last too long, as he resumed firing his own verbal bullets again.

“Sometimes I think about not talking, but then I just don’t feel like myself,” he said. “If somebody says something to me, it’s so hard for me to not say anything at all and to let it ride. I’m the kind of person that if you say something to me and I don’t agree with what you’re saying, I’m gonna let you know that I don’t agree, and I’m gonna say something about it. I’m an easygoing person, but at the same time, if you piss me off, I’m gonna let you know something, and that’s how I roll and I don’t want to change that. I’m gonna be better when I get older (Laughs), but right now, sometimes I open my mouth a little too much.”

Well, if anything, it kept Evans engaged in the fight game as his knee healed, and when he was greenlighted to get back into the gym, he did so with a new team fighting out of the Imperial Athletics gym in Boca Raton, Florida. Dubbing themselves “The Blackzilians,” Evans’ squad includes Anthony Johnson, Jorge Santiago, Mike Van Arsdale, Sergio “Babu”, Diogenes Assahida, JZ Cavalcante, and many more. And fortunately for him, the gym has become home, and his training partners his new family.

“It was a little bit trying at first because I was a bit afraid that things weren’t gonna gel together,” said Evans. “We had such a dynamic thing in Albuquerque (with the Jackson team) and such great chemistry and energy there, and I didn’t think you could replicate it anywhere else. I come here and it happened again. We had something that was built on the foundation which the Jackson team was created, and it was just about pure intentions. And that’s the recipe right there. We have a bunch of guys on my team that have nothing but pure intentions about training with each other and getting better and leaving all the stupid things that tear gyms apart behind and having a family atmosphere. We all have the same manager, Glenn Robinson, and he brought all of us together, and through him we’re all connected, so we all spend a lot of time together, and when there’s a fight, we all come together like a family.”

That family has been by Evans’ side as he got over the disappointment of seeing Phil Davis fall out of this Saturday’s UFC 133 main event, and then found his groove again with the insertion of Tito Ortiz into the headlining slot alongside him. And at this point, Evans is just happy to get a fight. To get it against Ortiz, who he battled to a three round draw with in 2007 is an added perk.

“I had moved on,” said Evans when asked if he had given up on the possibility of a rematch with Ortiz. “We went in two different ways as far as the trajectory of our careers, so I just gave up hope that this fight would even happen. He went winless for like five years, so I didn’t think it would happen. He was almost out of the UFC.”

But in July, Ortiz, who hadn’t won a bout since 2006, turned back the clock and scored a huge first round submission win over Ryan Bader at UFC 132. Did the win shock Evans?

“It shocked me that he beat Bader,” he admits. “I think it shocked him that he beat Bader. (Laughs) I think it took him weeks to realize that he actually beat Bader, but yeah, it definitely shocked me. And now it’s funny how everybody’s like ‘Oh my God, Tito Ortiz is back. He’s back!’ And everybody’s buggin’ out about it. That’s the funny thing about it, and they hate me so much that they want Tito to win just because Tito Ortiz is back. Hey, it’s a great story and you couldn’t write a better script than that – a guy who’s gonna be out of the UFC now has a chance to put himself in position to be right back in the mix again.”

Unfortunately, with Ortiz’ win propelling him back into the spotlight, Evans has been handed the bad guy role again. And despite being one of the game’s good guys, he’s come to accept that for some people, he’ll always be the villain.

“Yeah, I’ve come to accept it,” he said. “I’m so far from that kind of person that people think I am, and it used to bother me, but now I’m to the point where it’s like ‘whatever, the people will believe what they want to believe.’ They got a chance to glimpse who I am on The Ultimate Fighter show and they saw the kind of person I am, but they still want to believe that I’m evil or mean or whatever, and it’s just the way it is, and I can’t change that. People need people like me. They need somebody to root against.”

There are people are on the 31-year old’s side though, and they include a lot of his peers, many of whom now look up to him as one of the seasoned vets of the sport. Evans is flattered that his fellow fighters see him in that light.

“It is kinda crazy because I remember being in that position and looking to Randy Couture and Tito Ortiz and those guys and seeing them as vets in the game,” he said. “But now, I’m the guy, and it’s crazy to think that people are looking at me in that light, but I appreciate it too, because that means that the things I’ve done and the choices I’ve made weren’t in vain. If the choices I made helped somebody else make a better choice for themselves in the future, then the choice that I made was worth it.”

Who Rashad Evans is right now is a former world champion who is well aware that he is one victory over Tito Ortiz away from a shot at regaining his crown. The question is, given his history with both Jones and Jackson, does he have a preference if he gets to fight the winner of their September bout?

“I would like to fight Jon, just because I really want to be the one to beat him,” said Evans. “But I wouldn’t mind seeing Rampage put some humbleness into this kid. He is so arrogant and cocky and it’s just getting worse and worse as time goes by. If they don’t let me get a chance to put him down, I just want somebody to sit him down and let him know that you’re not the gift to MMA. There’s been many like you. There’s been BJ Penn, there’s been Georges St-Pierre, there’s been Vitor Belfort, Chuck Liddell, Randy Couture. And none of those guys had the game figured out to the point where they couldn’t be beat. At one point they were all touchable. Everybody’s touchable, and he’s no different and I want him to be touched. I want him to know he’s not untouchable.”