The Wait is Over for Daniel Sarafian

"It feels great to be part of something big, but once the Octagon door closes, it's me against Dollaway fighting." - Daniel Sarafian 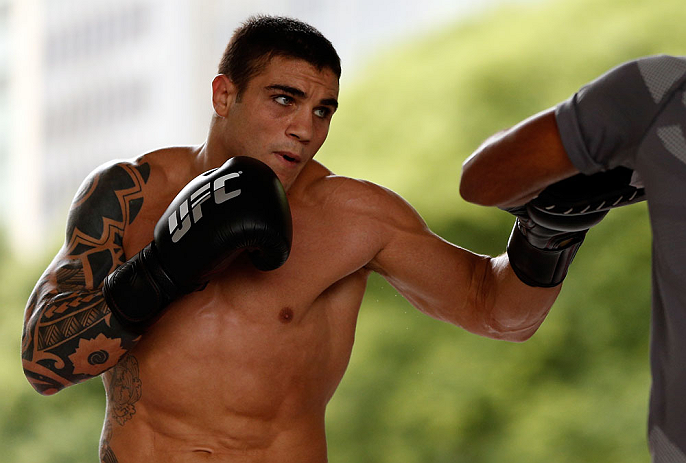 It was a first for the UFC and a first for Daniel Sarafian, one that neither wanted to see happen, but in the fight game, the most important thing anyone can do after bad news is to shake it off and move forward. The UFC did just that when Sarafian got injured and was forced to withdraw from last June’s Ultimate Fighter Brazil final against Cezar Ferreira at UFC 147, replacing him with the man he defeated in the semifinals, Sergio Moraes.

For Sao Paulo’s Sarafian, who had waited his entire career for this moment, beating Richardson Moreira, Renee Forte, and Moraes to get there, it was a lot tougher.

“It was frustrating to not be able to compete at the TUF Brazil finals, as I had earned my place in the final, and it was meaningful to have a shot at being the champion of that tournament and to be able to have the chance to finish the work I had started,” Sarafian said through manager / translator Eduardo Alonso. “But it happens, and after I accepted that and moved on, it was more a matter of dealing with anxiety to first be able to train everything again, and then be able to fight and finally make my UFC debut, which was my goal ever since I started fighting. But I wouldn't call it frustration anymore; it’s more like anxiety to finally make it happen.”

This Saturday, that anxiety will come to an end when he debuts in the Octagon against CB Dollaway. And this isn’t any ordinary debut, as he will be doing it in his home city and in the UFC on FX 7 co-main event, right under the bout featuring his TUF Brazil coach, Vitor Belfort, against Michael Bisping. If you want to consider such placement a reward for his patience, you can, but more likely it’s because the talented Sarafian is the real deal, and an extremely popular figure at home already. That much was evident when he showed up as a special guest at UFC 147. And the positive reaction he got helped soothe the idea of not being able to fight that night.

“The whole experience at UFC 147 in Belo Horizonte was very different,” he admits. “To be there, at the show, and at the same time not being part of it anymore, and seeing all my friends and colleagues from the show there fighting and competing was certainly a strange mixed feeling. I felt very happy for them, to see them having their chance on the big stage, mostly those who I became friends with. I was also very happy to see the attention I was getting from the fans, and knowing that all that happened during the show and all the work we all put in wasn't in vain just because of the injury. At the same time it was strange, a mixed feeling at not been able to fight. But I think all those things I went through gave me a chance to mature even more, get more used to the UFC, to the fans' attention, experience the backstage and the press attention, and it helped me get more prepared for my debut in a general sense. That gave me some peace of mind, to see that my career was still progressing despite the injury.”

A pro since 2006, Sarafian went 7-2 before the call to the UFC, with the most notable name on his record being UFC vet Mike Whitehead, who he fought in just his second fight. He would only lose once more after that, and after landing a spot on TUF, many saw him as an early favorite at 185 pounds. But despite this, he admits that he wasn’t so sure of getting his shot in the UFC at that time without the aid of TUF.

“Quite frankly it's tough to say,” he said. “The UFC is the pinnacle of MMA and it's the goal and dream of every fighter. Because of that, it's very tough, as there are so many good fighters competing for very few spots, and it's even tough for matchmakers to make an objective decision a lot of times. I have a good team around me, my manager is very experienced, and we were working hard. That's all a fighter and a team can do: keep working, keep trying and hope that one day they'll be given a chance. It's funny because some sponsors back them were pressuring me into giving up the UFC dream to fight in other smaller leagues, but I would never give up.”

It was a wise choice, and after earning his way into the house by decisioning Moreira, he submitted Forte and knocked out Moraes, leaving nothing up to chance, at least until the injury that blindsided him. Yet despite the setback, his team - which includes the highly-respected Alonso and UFC welterweight contender Demian Maia – made sure he kept his eyes on the prize.

“Yes, that was the most important part,” said Sarafian. “I have a good team around me, people that have been in this game and have dealt on the big stage for a long time, such as my teammate Demian Maia, my manager Eduardo Alonso, trainers like Ivan "Pitu," who worked with boxing champions, and my training partners. I was able to use that time off to learn more, acquire experience and it felt like moving forward regardless. That helped me a lot to stay positive and understand that it was a matter of time and I had to do my job and keep preparing myself. I went to UFC 147, and dealt with a lot of media and fan interest, had more contact with the UFC, and also saw all the training camps from Demian Maia for UFC 148 and 153, traveled with him for both fights, and saw the locker room warm up. All of that, plus all the training that I could do under doctor’s orders, and all the professional commitments that I had, such as press, traveling, and sponsors kept me busy, involved in the sport and learning at the same time. On top of that I worked with a sport psychologist, Rubinho, and all of that helped me a lot to stay positive and focus knowing it was up to me to make good use of that time and prepare myself more.”

All that’s left is the fight, and Sarafian isn’t getting an easy one in Dollaway, a former Division I All-American wrestler with six UFC wins, most recently a May 2012 victory over Jason “Mayhem” Miller. The 30-year-old Sarafian is under no illusions about the task ahead of him this weekend – he knows he’s in for a fight.

“CB presents all kinds of difficulties,” he said. “I have a lot of respect for him, as he is an experienced fighter. To stay competitive in the UFC for several years isn't an easy thing to do, and that alone shows how tough and good he is. I think he is pretty well rounded, despite his wrestling background, so I’ve got to be alert for anything and everything.”

That shouldn’t be a problem, as you can expect that all of Sarafian’s senses will be on high alert before the biggest fight of his career, and the one he’s thought about as soon as he put on the gloves for the first time.

“I think overall it's going to be fantastic,” he said. “Brazilian fans are very enthusiastic, and the environment will be crazy, that's for sure. It's also the first UFC show of the year, which also has a special feeling to it, so it'll be a great experience for the fans. But all in all, I approach it as a fight. It feels great to be part of something big, but once the Octagon door closes, it's me against Dollaway fighting and it would be as tough if it was us fighting in a cage in an empty gym. So I have to erase all other factors and distractions from my mind, and do my job the best way possible.”