For Aspen Ladd, The Wait Is Almost Over

“The last couple weeks have been very physically and emotionally not the greatest,” began Aspen Ladd, chuckling at her colossal understatement as we spoke just a few days ahead of her featherweight clash with Norma Dumont that serves as the main event of Saturday’s fight card at the UFC APEX.

Scheduled to face Macy Chiasson on October 2 in a postponed engagement from the summer that turned into a bit of a grudge match (at least from Chiasson’s side) in the days leading up to the contest, Ladd stepped on the scale the morning before the event and failed to make the 136-pound bantamweight limit.

She looked mortified as she stood behind the three-sided curtain used to allow athletes to remove all their clothing in an effort to make weight. It was likely a mix of exhaustion from a grueling weight cut gone bad and awareness that a storm of scrutiny, criticism, and Internet ugliness would be headed her way as soon as news of her miss hit Twitter.

Soon after her failed attempt to make weight, as the fight with Chiasson was officially scrapped, Ladd took to social media, owning her mistake, offering both an apology and an explanation for what transpired. She closed out the post by saying, “I’m going to get slammed regardless, so let it begin.”

While some people certainly offered encouragement and support, there was also a great deal of all those elements the 26-year-old knew would be headed her way, being launched by everyone from colleagues, contemporaries, and media to armchair pundits and the snarky, miserable set on social media that have a lot to say, but keep their own profiles on private because return fire is not something they’re comfortable with.

“After something like that — just having prepared so much for it, and it’s basically your life because it’s what you do (for a living) — you feel pretty worthless, honestly,” Ladd said of the weight miss, fight cancellation, and subsequent fallout. “So (these last 10 days have been about) just getting over that and getting ready for the next step, and that’s all I wanted to do at that point.”

Not only did the situation at the start of the month wipe an opportunity to compete off the calendar, it also continued to extend Ladd’s time on the sidelines following knee surgery, which had already dragged on much longer than the 26-year-old standout would have liked. 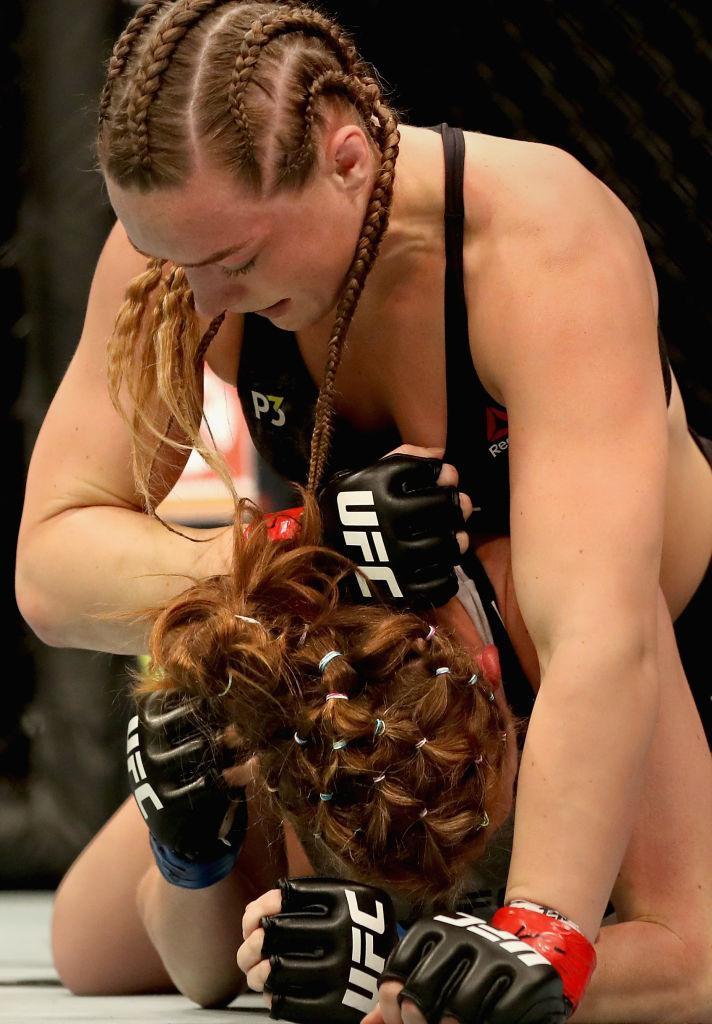 The injury took place six months after her third-round stoppage win over Yana Kunitskaya, with a bout against Julianna Pena having fallen apart in between. Surgery put her on the shelf for a little over a year, and just a few days before she was set to return in July, Chiasson suffered an injury that put their pairing on ice and put a couple more months between Ladd and her return.

“A fighter without fighting, it’s basically, ‘Who are you? What are you doing?’” the thoughtful, articulate competitor offered, peeling back the curtain on the mental struggles that accompany getting over a physical ailment. “It’s been so long where I was physically incapable of it and then things going wrong that I just want to get in there; I just want to get to fight night. I cannot wait.”

That wait is almost over.

After three or four days of getting completely away from people and social media, opportunity knocked on Ladd’s door when former bantamweight champion Holly Holm suffered a knee injury that knocked her out of her scheduled main event clash with Dumont on Saturday.

RELATED: Norma Dumont Ready For Anything

Without knowing the particulars, the Northern California native, who prefers hiking in the mountains with her dogs to just about anything else, jumped at the chance to replace Holm, and then got even more excited once she learned the details of what she had agreed to.

“I got the call that Holly had dropped out on Wednesday night,” recalled Ladd, who sports a 4-1 record with three finishes inside the Octagon and a 9-1 record overall. “At that point, it was, ‘Do you want the fight?’ I’m sure we’re not the first ones they called for it, but it almost felt like fate, so it was like, ‘Yeah, I’m ready to go. I feel good, so let’s go do this.’

“I couldn’t be more grateful for this opportunity,” she continued. “It was weird because they called me and said, ‘Holly Holm dropped out’ and I didn’t know who the opponent was or where on the card it was, but I was like, ‘Sweet; let’s do it!’ And then we found out the details that it’s the main event spot, it’s Norma Dumont — a very dangerous opponent — and it honestly adds more excitement to it.”

Dumont offered similar thoughts about Ladd when we spoke on Tuesday, praising her opponent’s gameness and aggressive approach inside the Octagon, predicting that Saturday night’s main event will be a wildly entertaining affair that will make fans forget it wasn’t the matchup they were originally anticipating.

“There are certain opponents where you go on there and you know there are Fight of the Night possibilities, and it takes two to tango there, and this is one of them,” said Ladd, who earned Fight of the Night honors in her entertaining scrap with Sijara Eubanks in May 2019 and has been an action-oriented fighter throughout her career. “When I started figuring out who she is and what she did, I was like, ‘All right — this is gonna be a good one.’” 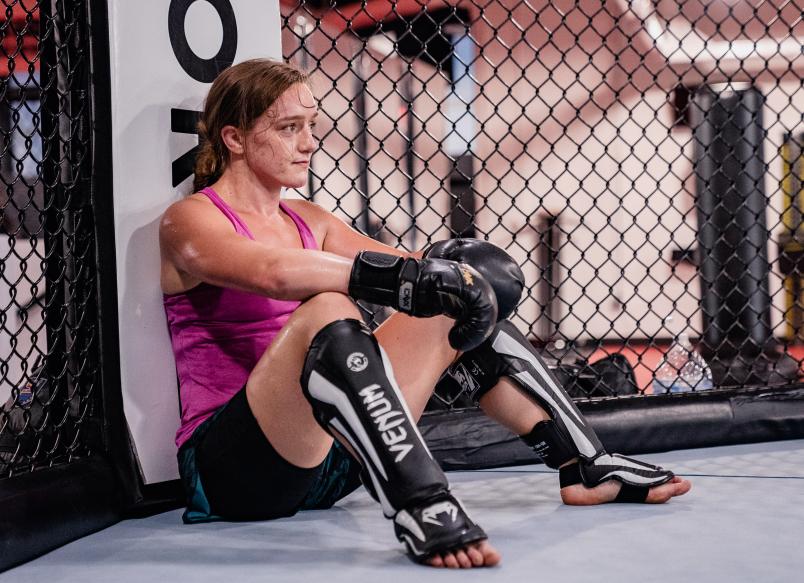 It’s also a chance to take the focus away from her miscue on the scale while reminding everyone what she’s capable of doing inside the Octagon.

But most importantly of all, after 680 long days, it’s a chance to step into the cage and compete again.

“It’s re-affirming, because I’ve been out so long between the injuries and fight drama, with things falling out or not working out,” she said of competing this weekend and having a strong performance against Dumont. “It’s getting back to what I do and getting back to myself, so nothing could be more important.

“I don’t even want to think about it, honestly,” Ladd added when asked how satisfying a victory on Saturday night would be after more than 22 months and a whole bushel of issues between fights. “As far as I’m concerned, the fight is the end of the world.

“What you’re talking about is next-level good feeling, but I don’t want to think about it.” 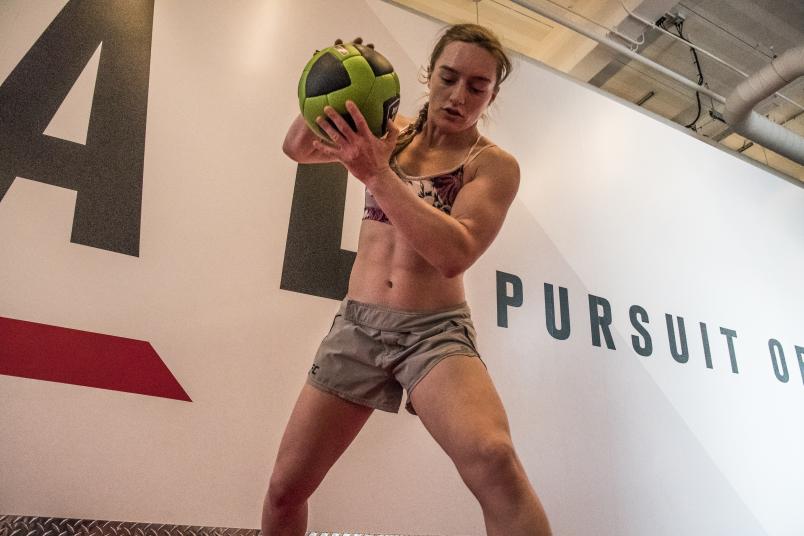 She also doesn’t want to say anything definitive about her fighting future, either, at least when it comes to where she’ll compete, preferring instead to acknowledge the realities of both options and take a wait and see approach.

“I don’t see it as the next chapter necessarily,” Ladd said of fighting at featherweight this weekend. “I see myself going back-and-forth, and I always have.

“At ’35, it’s very difficult and it will take me a long time; it’s something I can do a couple times a year. But ’45 is entirely different — I can go back-to-back, so it’s more opportunities and it’s far healthier for me.

“It’s also talking with the UFC and seeing where to go after each fight, where the UFC wants me,” she added. “At the end of the day, they’re the bosses and they make the decisions. We’ll see after this fight — we’ll talk to the guys that matter, and we’ll go from there.”

For now, Ladd is simply focused on sharing the cage with Dumont on Saturday and finally getting to have some fun again.