Vote now in Final 4 for Greatest Fight of All Time 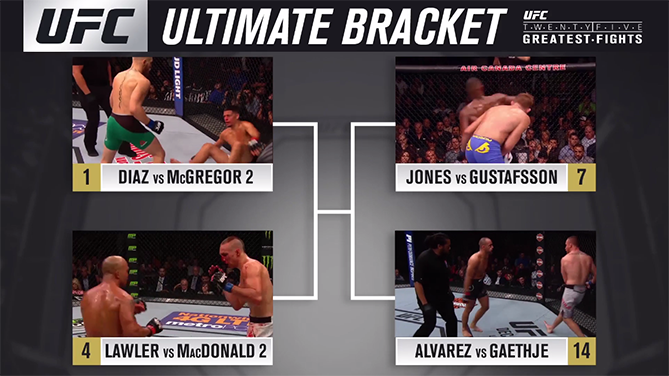 In honor of March Madness, the UFC has put together a tournament of its own featuring a bracket filled with the 25 Greatest Fights of All Time. Fans have voted and let their voices be heard.

After some close battles the Final 4 is set and voting has opened on Twitter to see which two classic fights will battle for the title of Greatest of All Time.

In the first matchup, No. 1-seed Nate Diaz vs Conor McGregor 2 from UFC 202 takes on No. 4-seed Robbie Lawler vs Rory MacDonald 2 from UFC 189. In the second matchup, No. 7-seed Jon Jones vs Alexander Gustaffson from UFC 165 is up against No. 14-seed Eddie Alvarez vs Justin Gaethje from UFC 218.

So that's the deal. Four fights left and there can be only one Greatest Fight of All Time. Vote below and make sure to share on Twitter so fans can have their vote counted.

Who moves on to the championship?!

Who moves on to the championship?!

Want to see all the Final 4 fights in their entirety? Head over to UFC FIGHT PASS now and watch those and all the fights from the entire bracket to relive some of the greatest action in UFC history. Not a FIGHT PASS member, that's OK. Start a FREE 7-day trial and you'll be hooked in no time.