Volkov Ready To Show The World That His Time Is Now

Alexander Volkov has gone 4-0 since arriving in the UFC, delivering a more emphatic, more impressive performance each time out.

After debuting with a split decision nod over frustrating grinder Timothy Johnson, the towering Russian heavyweight scored a unanimous decision victory over Roy “Big Country” Nelson, a third-round knockout win over Stefan Struve and a fourth-round finish over former champion Fabricio Werdum in the main event of this year’s annual stop in London back in March.

While it took a little longer than his win over Struve six months earlier in Rotterdam, it was the most complete and instructive performance of the bunch – a thorough dismantling and dismissal of one of the top heavyweights of all-time – and, at the time, it seemed like the type of victory to carry the 29-year-old talent into the title picture.

From a brief moment, it did.

Earlier this summer, Volkov was tabbed to make weight and prepare on stand-by when light heavyweight champion Daniel Cormier ventured up a division to square off with reigning heavyweight titleholder Stipe Miocic. If either man was forced out of the UFC 226 main event for any reason, “Drago” would be at the ready.

But after both Miocic and Cormier made it their early July showdown without issue, Volkov was knocked back a couple spots in the pecking order as Cormier claimed the heavyweight title and was immediately challenged by former champion and current WWE superstar Brock Lesnar.

“Of course I hoped it (the win over Werdum) would make me much closer to a title shot,” says Volkov, who squares off with Derrick Lewis this weekend in Las Vegas on the UFC 229 main card. “I was also the third fighter if Daniel (Cormier) or Stipe Miocic were injured before their fight, I would fight instead, so I hoped that I could fight for the belt, but right now it doesn’t matter.

"I'm not afraid to take punch and to throw punch back... so blood... sweat... just a really hard dynamic fight." - @AlexDragoVolkov expects his fight with @TheBeast_UFC to be one for the fans #UFC229 pic.twitter.com/yh3EZtvxPs
— UFC News (@UFCNews) October 3, 2018

“Right now, I am only looking to my next fight with Derrick Lewis. I think it will be a really good fight for me.”

The surging Russian is catching “The Black Beast” at an interesting time.

Although Lewis enters their Pay-Per-View encounter on a two-fight winning streak, his most recent performance left much to be desired, as Lewis got the nod over Francis Ngannou in a dreadful affair that set the table for Cormier’s first-round knockout win over Miocic in July.

Expected to be a heavyweight shootout where someone was sure to be left looking up at the lights, it instead turned into a 15-minute staring contest, with Lewis’ back seizing up early in the fight and Ngannou still rattled by his poor showing against Miocic six months earlier at UFC 220.

Conversely, Volkov has been hitting on all cylinders, which he credits to changes made in his training camp following his initial foray into the Octagon.

“The most nervous fight was the first fight, but since then, I have felt pretty comfortable,” admits Volkov. “The reason why I have gotten better and better is just hard work and because I have almost completely changed my camps to train much harder. I see the title is really close to me and my dream is to be the champion and now all my hard work is making my dreams come true. 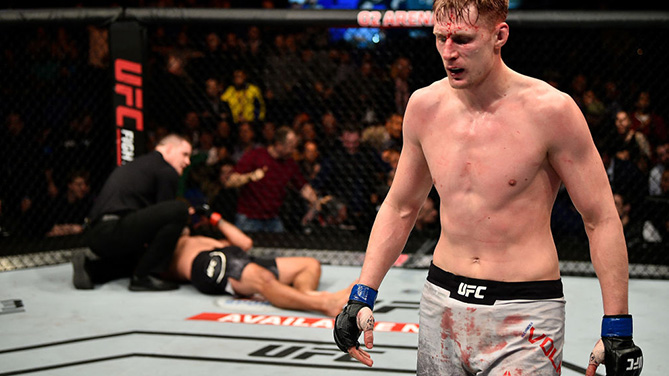 “I am training with the same team, but we changed everything,” he clarifies. “We added more coaches in our gym. For this fight, I had five coaches helping me in preparation. My camp became more professional than it was before.”

While Saturday’s showdown with Lewis isn’t the fight he was hoping for given his current run of success, Volkov is taking everything in stride, confident that he will encounter very few difficulties when he steps into the Octagon inside T-Mobile Arena this weekend.

Though Lewis brandishes legitimate fight-changing power and has exhibited the ability to snatch victory from the jaws of defeat with one clean shot, the two-time champion outside of the UFC believes he is the more complete fighter and that everything about this pairing points in the direction of him getting his hand raised on Saturday night.

“The first thing that I prepared for this fight was to be in really good condition; to be really prepared physically because technically, I believe I’m much better in everything than he is,” says Volkov. “I’m practicing all aspects – striking, jiu-jitsu, wrestling – every day, so the main thing for me is to go through the fight fresh and powerful.

“I feel I have everything to win this fight and how it will play out, we’ll see how tough Derrick Lewis will be in this fight.”