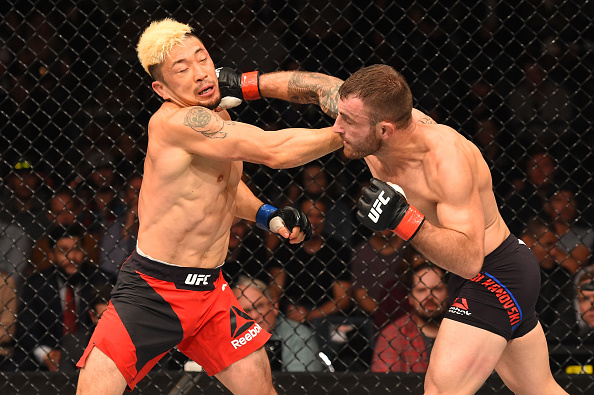 Many fighters fall in love with MMA after getting beat up on their first day of training, consumed by wanting to learn whatever magic their opponent used to dominate them.

The story of UFC featherweight Alexander “The Great” Volkanovski, who fights Shane Young this Saturday (Sunday local time) at UFC Fight Night: Werdum vs Tybura at the Qudos Bank Arena in Sydney, is the opposite.

Before he even stepped foot in what would later become his home gym, Volkanovski was targeted as fresh meat.

Strange, considering that this was in 2011, when he was still a 213-pound rugby league player. Unbeknownst to his taunter, he’d also won a national championship in wrestling as a teen, although he’d quit the sport around ten years prior to play rugby.

“I remember walking in, this was the first time I ever went into my coach’s gym. And I was going to do it more for pre-season (for rugby). I remember there was a guy at my school, he was a bit older, he looks at me and goes ‘What are you doing here? You’re going to get smashed.’ This is before I even walked in the door. I sort of brushed it off, I could’ve turned around and never done an MMA fight or trained MMA at all, but I didn’t really care and just went in.”

But when Volkanovski turned up for his first class at the Freestyle Fighting Gym the next day, he wasn’t the one being smashed.

While that proved too much for his opponent’s ego, it signaled to Volkanovski that he had a future in his new sport.

“The next day, that same guy was there, and I remember we had grappling. And this was the first grapple I’d ever done, and he’d been doing it for a little while, he might have even been a blue belt,” said the native of Shellharbour, New South Wales, Australia. “And I just remember absolutely smashing him, I was all over him (laughs). And he never set foot in our gym ever again. And that’s sort of where I thought this ain’t too bad, I’m taking out these guys that think they’re good and that was probably where I was like, I think I’ve got it.”

Then working as a concreter in the family business and earning a modest income as a first grade rugby league player for the Warilla Gorillas on the New South Wales South Coast, Volkanovski soon had to pick between his two sports.

The up and comer, who made his professional MMA debut in 2012, figured he’d gone as far as he could in rugby. But Volkanovski, who would soon transform into a smothering grappler with brutal ground-and-pound, knew he had what it took to become an elite MMA fighter.

“(When I played rugby) I was a 97 kilogram front-rower. They call them ‘props,’ one of the guys that just runs straight at people pretty much. And I used to be pretty good at it. I was a (legendary Australian rugby player) Mick Cronin medalist, and Man of the Match in the last year of football, and I had a couple of fights that year,” he said. “That’s when I decided, we’re finishing in a good year, we won the final, I scored a try, won Man of the Match, and I made the decision to go to MMA and take MMA seriously and it was probably one of the best decisions I ever made.”

But for the 99.9% of fighters who haven’t made the elite level, how seriously you take MMA is inversely related to your financial security.

For Volkanovski, married and a father of two daughters aged two years and eight weeks old, cash flow took a temporary back seat as he tried to crack the UFC roster.

Things are better now, though putting food on the table remains a key motivator for him.

“Especially before the UFC it was much harder, I was chasing the dream. I really wanted to get into the UFC and we sort of put life on hold until that happened. I was living at my mum’s house and then I finally got that UFC contract,” said Volkanovski. “And it’s helping a lot, it’s definitely a lot better, but at the same time, family’s not cheap so I need to fight regularly, and I want to shoot through these ranks so I can start making some serious money.”

After over four years spent amassing a 13-1 record on the Australian circuit, and a dogged #SignVolkanovski social media campaign, Volkanovski’s big break finally came: a debut against Yusuke Kasuya at UFC Melbourne: Brunson vs Whittaker on November 27, 2016.

After some back and forth grappling exchanges in the first, Volkanovski’s Japanese opponent went face down for a leg lock in the second round. The ill-fated submission attempt gave the Australian the opening he needed, as he landed vicious right hands on his opponent for a TKO stoppage.

Volkanovski followed up the victory with a win over Mizuto Hirota at UFC Fight Night: Lewis vs Hunt in June of this year, 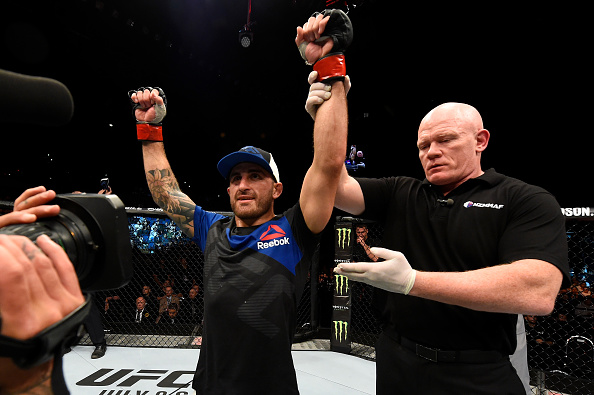 nailing his durable opponent with hard shots standing and on the mat en route to a unanimous decision.

For Volkanovski, his UFC success is made sweeter by the fact he came agonizingly close to an Octagon debut earlier in his career.

“(Former UFC matchmaker) Joe Silva wanted me to fight on the UFC Sydney card, and a management company said I was contracted to another fight and robbed me of that opportunity. That was my foot in the door, and like I said, I’ve put my family on hold just so I could make the UFC and that was my chance,” he said. “It just got taken right from me by a management company, trying to get one of their own guys in because I wasn’t contracted to them. They made it as if I was contracted to this fight I was doing which I wasn’t, and I always had a UFC clause where if the UFC called me, I could fight for the UFC, and everyone knew that.”

But Volkanovski has experienced enough misfortune in his professional career to know that training yourself to see the silver lining is the only way to stay sane as an MMA fighter.

“That was a big blow, but at the same time I stayed positive. I told myself maybe that was a bad matchup for me, maybe I could’ve lost and then got kicked out. I was just thinking as positively as well as I could just to get me through, and that’s really helped me. Every time there was a negative I tried to look at a positive through it, and just say it’s meant to be, maybe this is happening for a reason and just move on.”

The curveballs don’t end when a fighter makes the UFC. Once again, the Gods of MMA have put Volkanovski’s philosophy of staying positive to the test ahead of Saturday’s fight.

Volkanovski was originally set to fight Jeremy Kennedy on Saturday’s card, until injury sidelined the Canadian in early October. Kennedy was then replaced by explosive finisher Humberto Bandenay until the Peruvian was forced to withdraw due to an injury of his own less than a week ago.

Now, in UFC debutant “Sugar” Shane Young, Volkanovski faces a relatively unknown opponent with a mix of finishes by KO and submission to his name.

At just 24 years old, Young made his professional MMA debut in 2012, and has a record of 11-3 in MMA. The two will fight at a catchweight of 150 pounds, and despite the revolving door of opponents, Volkanovski’s goal will remain the same.

“I’m going to go out there and do my thing. As I said, I need to get these wins, shoot through these ranks and make some money.”