Volkan Oezdemir's Goal Has Not Changed

Oezdemir has secured his place among the top fighters at light heavyweight but he believes that he has what it takes to get back to contending for the belt.
By E. Spencer Kyte, on Twitter @SpencerKyte • Dec. 16, 2019

Volkan Oezdemir has spent the entirety of his UFC career competing against Top 10 opponents, and that will not change when he takes to the Octagon this weekend in Busan, South Korea to square off with Aleksandar Rakic.

Beginning with his short-notice split decision win over Ovince Saint Preux on Super Bowl Saturday in Houston two years ago and culminating with his second-round stoppage victory over Ilir Latifi in Montevideo, Uruguay back in August, the Swiss standout has faced a non-stop collection of elite competitors, including challenging for the light heavyweight title at the outset of 2018.

“My first fight in the UFC was against a Top 10 guy and I’ve been fighting them ever since,” said Oezdemir, who halted a three-fight slide with his win over Latifi in the summer. “Obviously, a win like that (over Latifi) was really amazing for me because I had been on a three-fight losing streak against the top dogs in my division, but it’s good to be on a positive note.

“I think in this sport, you’re only as good as your last fight, so it’s really important to showcase your skills to everyone watching,” continued the former title challenger, whose star had lost some of its shine in the eyes of some fickle observers during his recent slide. “They need to know you’re still there, you’re still strong and you’re going to be there to prove it.

Oezdemir is a perfect example of the inherent difficulties in the “instant analysis, immediate reaction” world that all sports have become.

When he worked his way through Saint Preux, Misha Cirkunov and Jimi Manuwa in rapid succession during his breakthrough rookie campaign on the roster, everyone questioned whether he was good enough to hang with the absolute best in the world, despite his success. 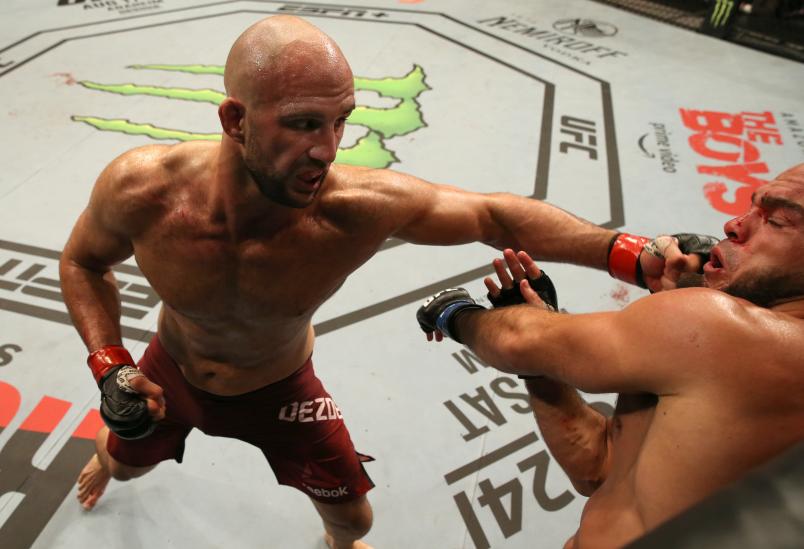 Volkan Oezdemir of Switzerland punches Ilir Latifi of Sweden in their light heavyweight fight during the UFC Fight Night event at Antel Arena on August 10, 2019 in Montevideo, Uruguay. (Photo by Alexandre Schneider/Zuffa LLC)

When he lost to Daniel Cormier at UFC 220 and followed it up with a hard-fought defeat at the hands of Anthony Smith, many believed their skepticism was validated. When his two-fight slide became a three-fight losing streak with a split decision loss to Dominick Reyes earlier this year, Oezdemir plummeted in the rankings and many people dismissed him as just another member of the middle class in the 205-pound ranks.

But what has been lost in the shuffle of those setbacks is that Cormier is one of the all-time greats, Smith earned a title shot following his victory in the Maritimes and Reyes is an undefeated prospect who just punched his own ticket to a championship opportunity with a first-round finish of Chris Weidman.

Also, plenty of people believed the judges got it wrong that night in March when the two shared the Octagon in London.

“Breaking into the Top 10 is really, really tough and I think staying there is a really amazing accomplishment,” said Oezdemir. “To be good one time is kind of easy, but the really hard part is to stay at that same level time after time.

“You saw the same with Johnny Walker,” he continued. “This guy had a lot of hype, now he got stopped by Corey Anderson and people have shut up about him, but it doesn’t make him any less of a talented fighter.

“Breaking into the Top 10 is really, really tough and I think staying there is a really amazing accomplishment.” 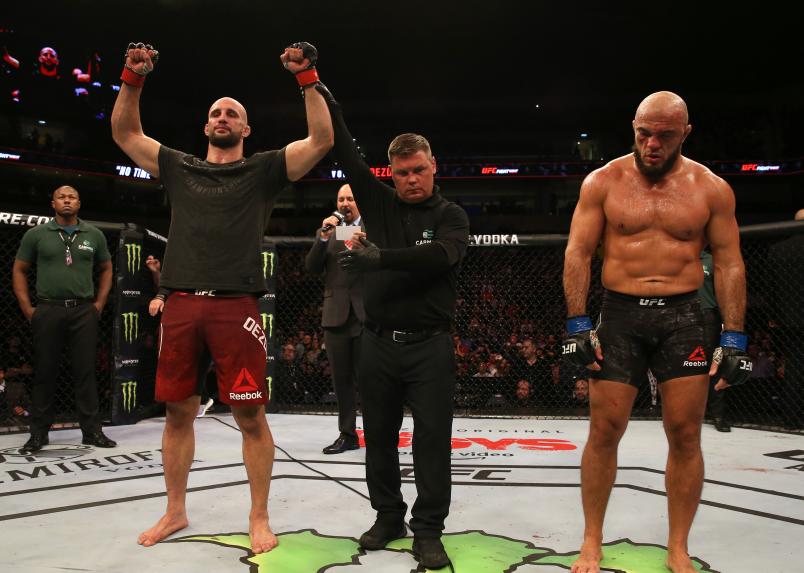 Volkan Oezdemir of Switzerland celebrates after his victory over Ilir Latifi of Sweden in their light heavyweight fight during the UFC Fight Night event at Antel Arena on August 10, 2019 in Montevideo, Uruguay. (Photo by Alexandre Schneider/Zuffa LLC)

Currently stationed at No. 8 in the rankings, Oezdemir will be fighting to defend his position when he squares off with the streaking Rakic on Saturday.

The 27-year-old Austrian enters Saturday’s contest having won a dozen consecutive fights, including each of his first four UFC starts. While others have made bigger splashes and garnered more attention as they’ve entered the fray in the light heavyweight ranks, Rakic has simply gone about his business, showcasing new wrinkles and flashes of potential each time out while making steady progress up the divisional ladder.

The victory earned him the Top 10 opponent he’d been looking for and gave Oezdemir a chance to offer some further perspective on the significance of what he’s done in less than three years competing inside the Octagon.

The two actually made their promotional debuts seven months apart, with Oezdemir edging out Saint Preux in February and Rakic following with a unanimous decision victory over Francimar Barroso in Rotterdam in September. But turning 30 means you’re no longer able to be considered young and observers often seem to be more enamored with the emerging talent on a lengthy run of success than the proven commodity who has suffered a couple setbacks, regardless of the strength of their respective schedules. 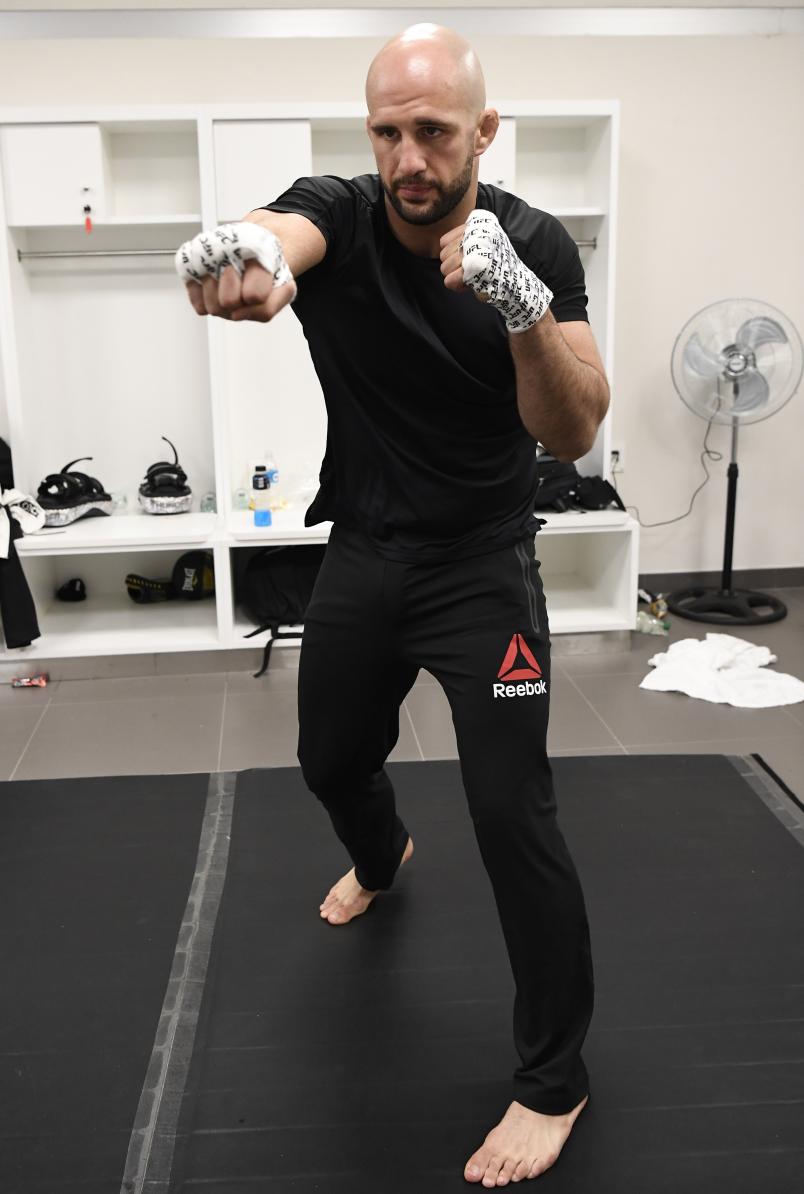 Volkan Oezdemir of Switzerland warms up prior to his fight during the UFC Fight Night event at Antel Arena on August 10, 2019 in Montevideo, Uruguay. (Photo by Mike Roach/Zuffa LLC)

“I think experience plays a big factor in the fights and how you deal with things,” Oezdemir said. “I’ve fought a lot of established people, while Rakic hasn’t faced any Top 10 opponents yet in his career.

“I think all the guys I’m facing are title-shot-worthy,” he added. “All these guys are going to eventually go to a title shot, including Rakic, but unfortunately for him, he’s going to have to face me first and I’m not here to give up my place (in the division). This is the place he’s going to be stopped.”

Oezdemir has run the gamut in terms of his public perception over his first seven trips into the Octagon, going from unknown to rising star and title challenger only to falter and get labeled “overrated” before leveling out with his impressive performance against Latifi in August.

Now, as he readies to cross the threshold into the UFC cage for the eighth time, the 30-year-old contender has solidified his place amongst the best in the division and is ready to set himself up to make another run at the title, starting with a victory on Saturday in Busan.

“My goal is to go back to the top of the division,” he said. “I know a win over Rakic will bring me back to the Top 5 guys and then I just have to cement my place there. From there, I catch another big win against another Top 5 guy and then I’m going to be able to go to the highest of the division and claim another title shot.”