Oezdemir Is Looking To Knock Latifi Out

After couple of tough fights, Volkan Oezdemir believes his fight on UFC Uruguay is his chance to get back on track.
By Gavin Porter • Aug. 8, 2019

Volkan Oezdemir’s rise to the top of the UFC’s light heavyweight division took “No Time” at all.

The fighter out of Switzerland defeated a former title challenger and two more division stalwarts in his first three bouts, with two of them ending in sub one-minute knockouts. Those impressive showings set up a title shot at 205 pounds with current UFC heavyweight champion Daniel Cormier.

Since that unsuccessful chance at the strap, it’s been tough sledding for Oezdemir. He has dropped his last three contests, including a controversial split decision against undefeated Dominick Reyes. But Oezdemir won’t be deterred, and he believes he can work his way right back to the top.

That journey starts Saturday at UFC Uruguay, when Oezdemir will square off with Ilir Latifi. It’s safe to say that Oezdemir couldn’t be more excited.

“It’s never a good thing to be waiting for a fight,” Oezdemir said. “Especially when it got postponed. Everything is nice when you train - you have a good feeling and you feel great - but it has to finish with something. It has to finish with a fight. And the fight last time didn’t happen and now it’s finally time to settle the beef.”

The matchup is one that has been tough to secure, as injuries have pushed the fight between Oezdemir and Latifi back. But now that it’s here, Oezdemir isn’t focused on how difficult it was to get to this point. He’s locked in on Latifi.

“Latifi is really stocky; he’s a strong guy, and like a little bull he’s rushing in trying to grab you,” Oezdemir said. “If he doesn’t grab you he will just go back to throwing hammers. He’s a really strong and stocky guy so it will be difficult to go for a takedown and stuff. But that’s actually not my game. Everybody knows what my game is; it’s not a secret. I come to knock people out.”

Oezdemir is right, it’s no secret that he has serious power and that any punch he lands could turn the lights off. A big knockout win over Latifi would keep Oezdemir right in the mix of the increasingly interesting light heavyweight division. 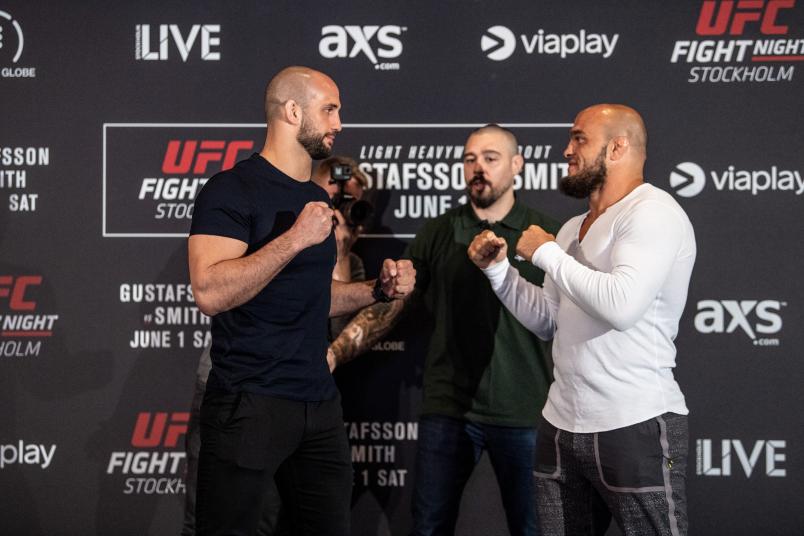 STOCKHOLM, SWEDEN - MAY 30: (L-R) Volkan Oezdemir of Switzerland and IIir Latifi of Sweden face off for the media during the UFC Fight Night Ultimate Media Day at Ericsson Globe Arena on May 30, 2019 in Stockholm, Sweden. (Photo by Jeff Bottari/Zuffa LLC/Zuffa LLC via Getty Images)

STOCKHOLM, SWEDEN - MAY 30: (L-R) Volkan Oezdemir of Switzerland and IIir Latifi of Sweden face off for the media during the UFC Fight Night Ultimate Media Day at Ericsson Globe Arena on May 30, 2019 in Stockholm, Sweden. (Photo by Jeff Bottari/Zuffa LLC/

As for fighting at the UFC’s first ever event in Uruguay, Oezdemir expects to just soak in the moment and produce a great show for fight fans.

“I like to go to new territory with the UFC and put on memorable fights,” Oezdemir said. “It’s great to reach new people and it’s really cool for me to experience a new place. I’ve been wanting to come to this region for a long time and on Saturday I’m going to have a great performance.

“They’re going to see some ‘No Time’ action.”

Make sure you tune into UFC Uruguay at 5pm/2pm ETPT for the ESPN+ prelims, followed by Oezdemir vs Latifi on the main card at 8pm/5pm ETPT.