"I consider myself a technical and aggressive fighter who knows when to use each skill at the right time." - Vitor Miranda 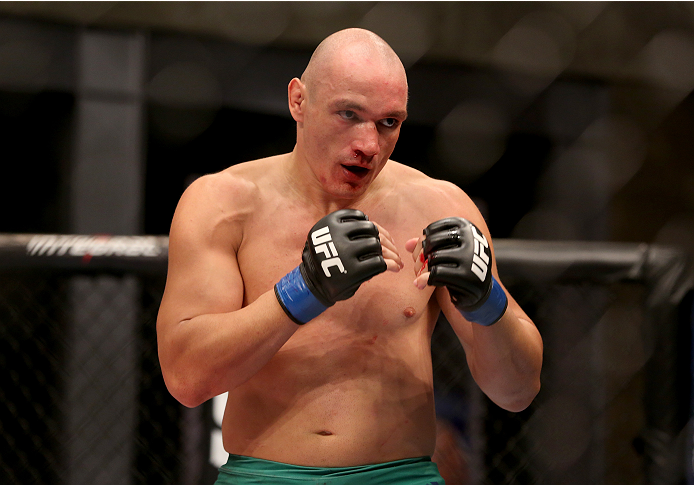 At 35, Vitor Miranda could make history as the oldest competitor to ever win The Ultimate Fighter if he beats Antonio Carlos Junior on Saturday night in Sao Paulo, but don’t think for a second that the pressure of performing such a feat has him overwhelmed.

“I'm feeling very calm and relaxed this week of my UFC debut because it is something I have worked for for a long time and I got a lot of experience being prepared for this moment,” said Miranda through translator Michele Spinelli Davis.

That experience comes from kickboxing, MMA, six weeks on TUF Brazil 3, and from life, with his stint in the world of reality television being the most recent instance of him looking at the odds, smiling at them, and beating them.

Despite being one of the show’s favorites going in, Team Sonnen’s Miranda looked to be a man among boys as he delivered three knockout victories to punch his ticket to the finals. Not surprisingly, it’s a moment in his life that he’ll look back in a positive way.

“It was one of the best experiences of my life,” he said. “I conquered part of my dream, grew a lot as a professional and met great people and athletes.”

As for any negatives, he’ll only say “The worst part was having to see my friends lose their fights so I can fulfill my dreams.”

Yeah, despite being nicknamed “Lex Luthor,” after the Superman villain, Rio de Janeiro’s Miranda is a pretty decent guy, a husband and father who could become one of the feel good stories of 2014 should he win this weekend. But to get there, he has to get past the lone member of Team Wanderlei still standing, jiu-jitsu ace Carlos Junior.

“Antônio is a young fighter, good in jiu-jitsu, and he recently arrived in the world of MMA,” said Miranda. “That is exactly why he becomes an unpredictable and dangerous fighter.”

As a former pro kickboxer with a 23-8-1 (18 KOs) record, Miranda may be a little more predictable when it comes to game plan, but no less dangerous. His 90% finishing rate in his wins proves that, but he’s no wild-swinging brawler.

“I consider myself a technical and aggressive fighter who knows when to use each skill at the right time,” he said.

With his skills and mindset, it almost makes you want to fast forward and see how he will do in the UFC’s heavyweight division, but like TUF Brazil 3 middleweight finalists Warlley Alves and Marcio Alexandre, the 6-foot-1, 230-pound Miranda may very well be taking himself south following Saturday’s bout.

“I think the heavyweight division is the easiest division technically,” he said. “But my problem would be the physical frame of the fighters. After the TUF finale I'll sit down with my coaches and manager to discuss what is the best weight division for me.”

And while he admits that at 35, he has “a big sense of urgency to reach my maximum potential,” at the same time he wants “to go through all the steps necessary and to make sure that I'm ready when the opportunity comes.”

When you look at it, it’s a good problem to have, figuring out where you’re going to fight and against whom in the biggest MMA organization on the planet. It all begins with 15 minutes or less on Saturday, and Miranda can’t wait to hear that first bell ring.

“Winning TUF Brazil 3 will be a milestone in my life,” he said. “It will be the beginning of the professional and financial success that I always craved for me and for my family.”