Vitor Belfort: Through the Fire 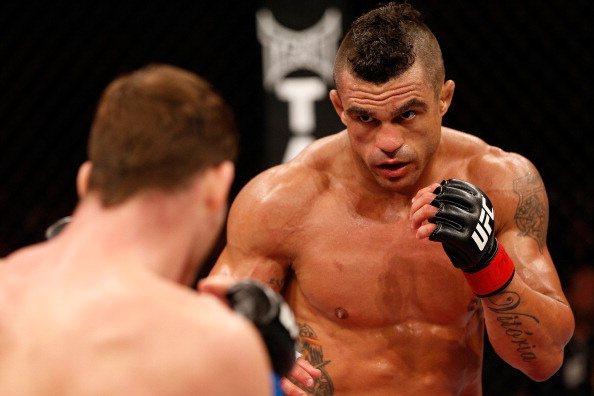 There is an intensity to Vitor Belfort that extends to every part of his life.

The same dedication and passion he has put into becoming a legendary competitor in mixed martial arts are the same efforts he’s committed to the spiritual aspects of his world as a whole. “The Phenom” has stood behind his convictions in all facets and factors, and staying the course is what he believes has allowed him to rise above time and time again.

“Passion is something that rises out of you like a flame,” Belfort said. “My work ethic is strong in every area of my life and I strive to give my best. That’s how I live and I feel that’s the only way to do it. I believe it’s important to give your best in everything you do. The only way to achieve success is to go through pain and sacrifice. You cannot become great without going through the fire. You have to put yourself through the fire because fire purifies, so at the end of pain and sacrifice you will find success. I believe hard work pays off.”

And while Belfort’s career has been rife with success over the course of his two-decade run at the elite level of MMA, there has been no shortage of criticism along the way. That said, trials and tribulations are what the former light heavyweight champion is all about, because there is no growth found within one’s comfort zone, and Belfort has never been interested in taking a backwards step.

Yet, just as styles and game plans have to be adapted inside of the cage on fight night, so does the approach a fighter takes to prepare himself for battle, and to this element the 38-year-old powerhouse is no exception. Many aspects of the game he’s been engaged in for the past 25 years have changed over that time, just as the man himself has done the same.

He’s weathered the storms of personal tragedy, controversy and setbacks alike, but he is still standing tall.

“I received some advice this past weekend,” Belfort recalled. “I met with (Republican presidential candidate) Ben Carson and it was really a great experience to spend time and speak with a guy who doesn’t pay attention to critics. What I’ve learned meeting people like him and reading different books and even learning about my favorite person in the world, Jesus, is that critics are necessary. Haters are necessary. Jesus had critics against him but he always kept his love and compassion. He knew the way he wanted to live and never let anything sway him.

“The temperature outside cannot affect the inside. Critics’ job is to criticize and haters need to hate, but that’s life, man. We have to understand that not everyone is going to think and act the way we do. I set the way I want to live and I’m not going to smack anyone else for the way they live theirs because at the end of the day those who smack you are doing it because they are envious of you and what you have. That is the mindset I live in. I chose what I chose and believe in what I believe. That is my choice and I put my focus on positive things. That is how I’m going to ride.”

On Saturday night in Sao Paulo, Brazil, Belfort will step in against a familiar foe in familiar territory. For the third time in his storied career, the middleweight knockout artist will square off with a fellow legend of the fisticuffs in Dan Henderson. The former two-division PRIDE champion and former Strikeforce light heavyweight titleholder have danced on two previous occasions, with each man claiming a win and splitting their prior tilts.

“Hendo” took the unanimous decision nod when they initially collided at PRIDE 32 back in 2006, but it was Belfort who put the more dominant entry into their rivalry as he served up a brutal combination knockout over the former Olympian in their next meeting seven years later in Brazil. Although Belfort does admit his spectacular head kick knockout over the perennial contender does add a touch of confidence where their trilogy fight is concerned, he’s not willing to look past the dangers Henderson presents.

If there is one thing Belfort has learned throughout his journey through MMA it’s that anything can happen at any moment when the fight goes live, and he’s found the most success when he’s the hunter inside the Octagon. In Belfort’s mind, the fight is about what he is going to do, and that particular focus is locked on putting Henderson away just like he did the last time they shared the cage together.

“Confidence is not arrogance. I am very confident in myself and how the fight will go. I am confident I will get the victory against him again. I’m very excited to fight a guy like Dan and can’t wait to get in there. The time is almost here. Let’s do it.”

With his bout against Henderson quickly approaching and both being representatives of an era whose participants are quickly dwindling at the highest level of the sport, the bigger question lurking is what Belfort has left to achieve in his career? He’s gone toe-to-toe with a collection of the best fighters to ever compete in the sport, and he’s found success at a respectable clip during that time. After having competed and fallen short in two title attempts over the past three years, it would be easy to understand if Belfort was simply willing to accept a place as an exciting fighter with headline quality on the larger landscape of the UFC, but that isn’t a position he’s going sit back and take. Belfort has every intention of getting his hands on championship gold, and it doesn’t matter what obstacles and opponents need to be toppled to make that happen.

The drive and ferocity that launched a legendary career when he was a teenager still burns within him, and there’s an absolute refusal on his part to go gently into the good night. If that were the case, he would have walked away from fighting long ago when there were plenty of reasons for him to do so, but that’s just not how Belfort is wired.

He believes the next chapter, the next challenge and the next step will bring out the very best in him, because the fire burning is still raging.

“Setbacks are a huge part of success because you cannot achieve success without adversity. You cannot achieve victory without the battles to fight. That has been the story of my life. I’ve risen above hardships time and time again, and every time a new opportunity and future is created. I put my focus on winning and doing what I love. When this flame is no longer there I will have no reason to be in the sport, but it’s still there. It’s still burning and I’m going to give my best because of it.”