Vitor Belfort - The Smile Says It All

"I'm still fighting. I used to fight on the same card as Dan Severn, and Mark Coleman. So I'm like a young dinosaur.” -Vitor Belfort 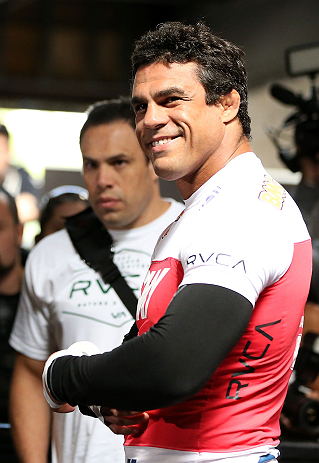 Vitor Belfort is smiling a lot these days. He may very well be the most dangerous smiling man in the world at the moment. Does he see something in the seemingly unbeatable Jon Jones like Max Schmeling saw something in Joe Louis back in 1936? Does he finally feel like fighting for the light heavyweight championship on short notice is the pressure-free situation he has waited his entire career for?

As Saturday night turns into Sunday morning this weekend, we will have an answer, but for now, we’ll have to be satisfied with Belfort’s words as he prepares for battle. Only to him, it’s not a battle, a war, a fight to the finish; it’s something a lot more, well, joyous than that.

“I have peace in the process, and I have joy in the journey,” said Belfort on a recent media teleconference. It’s not what you usually hear from a fighter before what could be the most important fight of his career, but the Brazilian has never fit the stereotypical mold that many place prizefighters in.

He was the prototype though. 19 years old, fast, powerful, could knock you out with either hand, and submit you as well. Add in matinee idol looks, and Belfort was Hollywood’s version of a fighter. In the real world though, his enormous early potential got disheveled along the way at times, as key losses at key times, contractual issues, and various other setbacks kept him from the greatness that should have been his before the age of 25. But just as he would get written off, he would win a big fight, take a title, score a spectacular knockout, and all was forgiven, at least for the night. And unlike most of his peers from those early days, Belfort is still here, still relevant, and still standing.

“Every day is a different day,” he said. “Every season is a different season. So when I look back and I look at myself in the past, I see how much I’ve grown in stature with maturity, wisdom, and that's it. I try to enjoy rejuvenating myself, looking at these young fighters and enjoying the process right now, you know, enjoying the today.”

In other words, as much as his fans and many in the media want to bring the 19-year-old Vitor Belfort back, he’s gone, replaced by a mature family man of 35 who still has the hunger to be great. Only this time, he isn’t letting it consume him. So when message boarders wonder why he’s smiling on fight week and making assumptions that their favorite fighter isn’t ready for Saturday’s main event, they should look back to the times when Belfort was ultra-serious and seemingly overtaken by the moment, with his performances reflecting that. Today, that’s not the case, and he admits it.

“Now, I fight not for the fame, not for the money, not for the position; I fight for the pleasure,” he said. “It's a joy. I remember the times that I had pressure in the past, thinking, you cannot lose, you have to represent your team. Now I'm just there, having fun. So for me, fighting Jon Jones, I never in my life had an idea that I would be fighting on the high level that I'm still fighting. I used to fight on the same card as Dan Severn, and Mark Coleman. So I'm like a young dinosaur.”

And that young dinosaur was the one who stepped up to fight Jones after Dan Henderson was forced out of the title bout (originally scheduled for September 1st) due to injury, Chael Sonnen was turned down as a possible foe by the Jones camp, and several other fighters refused to take the match. Belfort didn’t accept it; he asked for it.

Already in training for a UFC 153 bout in October against Alan Belcher, Belfort is coming off back-to-back finishes of Yoshihiro Akiyama (at middleweight) and Anthony Johnson (at 197 pounds), and while he has shown flashes of his younger days and he still has the speed and power that made him famous, he’s also more patient and more mature in the Octagon, a development that keeps him among the top contenders in the game.

You also have to get pushed in the gym every day, and that’s what’s been happening in South Florida as Belfort got ready for the Jones fight with his new team, the Blackzilians.

“I came here, I started training, and I loved it,” said Belfort. “It's a great fit for me. You know, I love training with amazing athletes and champions - K-1 champions, MMA champions - and they have the Brazilian culture here. This team is amazing and you have a lot of young future champions here. So it's good to be in the mix, training with high level people. I love it. This is like being in the Disneyland for me.”

Few, if any, people would describe getting pushed to the limits by a team that sports the likes of Rashad Evans, Tyrone Spong, Henri Hooft, and Alistair Overeem as Disneyland, but maybe that’s just the point. Maybe that’s why he’s smiling. After years and years of being told what he’s supposed to do and who he’s supposed to be, Vitor Belfort is enjoying the idea of doing what no one thinks he can.

“I go there and I don't have any pressure, just joy,” he said. “I’ll be happy, smiling every moment of the fight. It doesn't matter what type of position I'm in, it doesn't matter what I go through. I went through the hardest things in life, in the professional life and on the personal level. So it's a joy. I learned how to be happy even when I'm sad. So it's going to be a great challenge for myself. I love challenges.”