"Each coming fight is a challenge so each fight I have been training as a Navy Seal." - Vitor Belfort 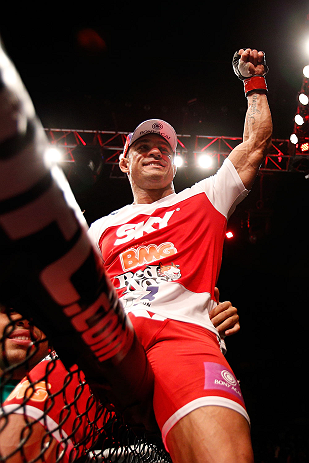 In a career which has spanned nearly two decades and transitioned through several defining eras, Vitor Belfort’s legacy as a mixed martial artist has been carved in stone.

“The Phenom” earned his nickname by blazing onto the scene as a heavy-handed 19-year-old knockout artist, racking up a collection of victims in brutal fashion during the initial stage of what was certain to be a legendary career. The talented young Brazilian rose to become one of the sport’s biggest stars as he helped carry the UFC from the days of Royce Gracie and open weight tournaments and into the Zuffa era, where sanctioning and the push towards mainstream acceptance were the order of the day.

While the Brazilian’s early success competing on the sport’s biggest stages helped make him a star, it wasn’t a journey free of conflict by any stretch. Upon his first return to the UFC in 2002, the brand of dominance fans had come to expect from Belfort was absent, as he won just two of his five showings during his second run with the organization.

Over the next four years, the peaks and valleys would continue as Belfort competed for various promotions around the world. Despite collecting a solid run of victories, he failed to gain any real traction in his career as his wins came against lower-tiered opposition as some of the promotions for which he was competing went out of business.

In late 2009 the former light heavyweight champion returned for a third run under the UFC banner and it was unclear whether the 31-year-old was going to make a curtain call or flip the switch on a career resurgence.

Nearly four years have passed since Belfort squared off with Rich Franklin at UFC 103 in Dallas. And while “new and improved” is a common cliché thrown around the MMA universe, the Blackzilians-trained fighter has proved he has plenty left to give inside the Octagon.

Since returning to the most successful promotion in the sport, Belfort has been successful in four out of his six showings, with his two setbacks coming against pound-for-pound greats Anderson Silva and Jon Jones. After coming up short in his title tilt against Jones at UFC 152, he returned to the middleweight division to face surging contender Michael Bisping at UFC on FX 7.

There was plenty on the line in Sao Paulo as “The Count” was promised a long-awaited shot at Silva’s title if he was victorious in the main event showdown. All Bisping had to do was get past Belfort. Unfortunately for the brash Brit, the former title challenger had different plans and scored an impressive second round stoppage, finishing Bisping with a head kick and a flurry of punches on the canvas.

The victory locked Belfort firmly in the contender’s tier of the middleweight division and ensured his next challenge would come with high stakes intact. This scenario became a reality when the UFC charged Belfort with the task of welcoming former Strikeforce middleweight champion Luke Rockhold for his Octagon debut.

The Brazilian powerhouse will mix it up with the AKA staple on Saturday at UFC on FX 8. Once again Belfort will be competing in front of a passionate crowd filled with his countrymen, and that is all the motivation Belfort needs heading into the bout with Rockhold.

“Fighting in Brazil with the whole crowd going crazy is always amazing,” Belfort said. “My dream came true. Since I was just a little boy in Brazil I was talking about MMA and everybody was looking at me, pre-judging my ideas and my sport, saying that this is not sport, but I never gave up because I knew one day my sport would be huge in Brazil and here we are with a lot of events in my country. What is amazing is that I am still surfing that wave.”

The lead up to his bout with Bisping brought about a transformation in Belfort. In addition to the Mohawk he revealed during his training camp, the MMA legend also brought a renewed sense of focus as he no longer saw his training as preparation for a fight, but more so a mission he was about to embark on.

The middleweight knockout artist likened himself to a Navy Seal with Bisping as the target in his sights. Now with his bout against Rockhold quickly approaching, Belfort has kept a similar mindset as he’s prepared to welcome the Santa Cruz native to the UFC fold.

“Each coming fight is a challenge so each fight I have been training as a Navy Seal,” Belfort said. “Luke is a great opponent. This fight will be interesting. I have been training hard to give the people a wonderful show. Fans are going to see a lion! They will see a great show.”

While the bout between Belfort and Rockhold could certainly carry title implications, the stylistic differences each fighter brings to the cage is perhaps the most interesting aspect of the matchup.

The 28-year-old Californian is a lengthy fighter, and in the past he has used his range to dictate where the action takes place. That being said, Belfort has shown a tremendous ability to close distance in rapid fashion and the majority of his success has come when he has been able to get inside on the opposition.

As a product of the famed American Kickboxing Academy, where he trains with highly credentialed wrestlers the likes of Daniel Cormier, Gray Maynard and Cain Velasquez, Rockhold’s grappling game is another strong weapon he has in his arsenal. And where the Belfort is primarily known for his striking game, the former champion has also proven to be no slouch when the action hits the canvas.

So while Rockhold’s style presents some interesting challenges, Belfort is confident he is prepared for anything the Strikeforce convert brings to the table.

“A fight is a fight. We never know what is going to happen. What I know is that I have good professionals here at the Blackzilians. Kenny Monday, Gilbert Burns, Andrews Nakahara, Henry Hooft , Cezar Mutante, Glauber Feitosa, and Jayme Sandall have all helped me prepare. Pedro Diaz is my boxing coach and I have been learning a lot with him.

“I have been training with one of the best Olympic trainers and coach of the U.S. Olympic team, Kenny Monday. I will be ready to any situation on this fight.”

A victory over Rockhold has the potential to launch Belfort back into the title conversation in the middleweight division, but championship gold isn’t his focus at this time. Throughout his career, Belfort has garnered acclaim and stood as a world champion, but these things are of little importance to him these days.