“You have to know who you are and what you’re capable of. It’s very important.” - Vitor Belfort 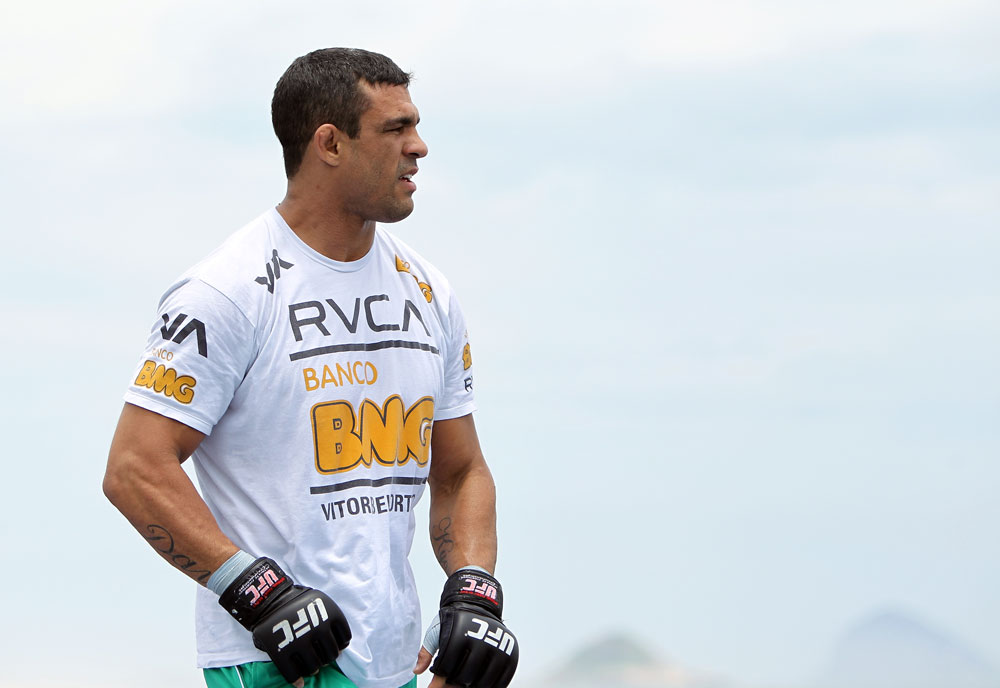 If you’ve been following mixed martial arts long enough to remember the “old” Vitor Belfort, the 19-year old teenager with the blazing hand and foot speed who captivated everyone back in 1997, you could almost feel like a proud parent watching him during the kickoff press conference for this Saturday’s UFC 142 event in Rio de Janeiro, Brazil.

There he was, not only the local kid coming back home as a triumphant hero and international star, but a mature 34-year old man whose goals aren’t just to win fights and championships, but to be an ambassador for the sport that has been his life for over 15 years.

“People who knew me a long time ago but don’t know me now, they have a disadvantage,” explained Belfort. “Every day I’ve had to increase knowledge, increase wisdom, increase my talent and add new tools to my game and to my life. I take every day as the last day of my life, and some days are hard, some days are easier, but the bottom line is that whoever doesn’t know me now has a disadvantage if they just know me from back then.”

Back then, Belfort was as wild as his flurries in the Octagon. In other words, he was like any other 19-year old thrust into the public eye. There would be soaring highs and catastrophic lows, but unlike the man he was most often compared to, former heavyweight boxing champ Mike Tyson, Belfort’s career didn’t flame out after a few dazzling prime years. The fighter dubbed “The Phenom” weathered every blow that came his way, and amazingly, he is still relevant and still a contender with realistic championship potential as he prepares for Saturday’s co-main event with Anthony Johnson.

“He’s young and has a big future in front of him,” said Belfort of “Rumble,” who is making his 185-pound debut. “He’s a tough opponent and he has the skills. He’s a great athlete, great wrestler, and it’s going to be pretty interesting to see how he’s gonna act in the ring. Will he try to take me down or will he try to stand?”

That decision may dictate whether Belfort goes into his stint as a coach on the first edition of The Ultimate Fighter Brazil with a win or a loss. And while Johnson has proven that he can be a chameleon in the Octagon, opting to use his wrestling to defeat Dan Hardy while returning to his bombs away strategy for his most recent win over Charlie Brenneman, Belfort says that his own strength comes from not straying too far from what he knows.

Fresh from an August knockout of Yoshihiro Akiyama that eased the disappointment of losing his early 2011 title fight against Anderson Silva, Belfort looked to be in prime form against the Japanese star, and the victory propelled him into this bout, which marks his first fight at home in Brazil since he knocked out his TUF Brazil coaching rival Wanderlei Silva in 44 seconds in October of 1998. But even as what promises to be an emotional night draws nearer, he’s doing his best not to get caught up in the distractions that come with fighting in his home city.

“I’m kinda thinking about that a little bit, but I’m trying to stay out of it,” he said. “I don’t want anything to take me away from my training. Every time I see myself drifting from my duty today, I try to go back, and me and the coaches are always focusing on what’s next so on the day, things will take care of themselves.”

A win over Johnson will be Belfort’s 21st as a professional, and seventh in his last eight fights. Next is the coaching stint on TUF Brazil, and then a rematch with Silva. It’s as close as a fighter will get to having a set schedule for the bulk of the year, and Belfort embraces it.

As for the opportunity to coach a group of UFC hopefuls, Belfort is looking forward to teaching the lessons he’s learned over the years and also letting his team know that to build the sport, they must realize that more eyes are on them than ever before, so the true responsibilities of being a professional lie beyond what happens in the Octagon.

“I’m going to be myself,” said Belfort of coaching TUF. “People will have a chance to know me more, how I am, what my values are when it comes to the sport, and how I respect my opponents and the fans. Bottom line, it’s a reality show, so it has to be real. I know some people have the tendency when they’re on TV to be one person and they try to get more attention so they get more money. I see a different way. If I can be true to people and be myself to them, I’m gonna get the respect. Either they like it or they don’t, but they’re gonna respect me because I respect them as well. And in this sport, we have a responsibility bigger than any other athlete, any other soccer player, anybody else. If you do something to somebody, you have a bigger price to pay because you’re a mixed martial artist. This is what I’m about to show them, and lead them in a way of being responsible and not letting fame get in the way.”

Coming from Belfort, a statement like that will carry more weight with the fighters he coaches simply because they know it’s not talk. He’s been where they are, he’s gone through the good, the bad, and the ugly of the sport, and he’s still standing. And more than that, he’s now able to focus his energies on the fight, and when that final punch is thrown and his hand is raised in victory, there are few people ever happier in that moment.

“It’s a payday process,” he said. “It’s like when a farmer sees his seeds turn into something. It’s an awesome feeling and it’s so great to see the reward from the sacrifices we made. So many people are involved, and you think about the process that turned into a win. It’s a great time and you’ve got to enjoy it and live the moment because that moment may never come back. Life is made by moments and sometimes even the bad moments make yourself better and make you stronger. So the focus should be on what’s next. Life is made day by day, hour by hour, minute by minute, and like the Americans say, ‘time is money’ (Laughs) so I invest my time like my money, in every way possible.”