Vitor Belfort: Guts, Glory, and the Best Part of His Life 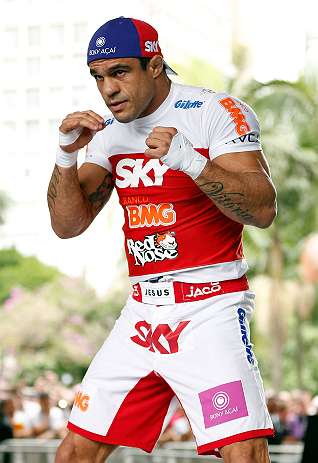 “I noticed he looked HUGE. Massive arms, chest and shoulders – a body for posing down at the beach – but then I noticed these little chicken legs sticking out of his arse. I thought: ‘He has the upper body of a lion but the legs of a chicken.’ -- Michael Bisping on Vitor Belfort to Yahoo Sports

For 16 years and counting, Vitor Belfort has taken the hits. He’s been kicked in the teeth, blasted by Anderson Silva in a bout that abruptly halted his chance at becoming a UFC champion in two different weight classes. Thanks to numerous injuries that have forced him out of scheduled bouts, Belfort’s engine, one that goes from zero to 100 faster than a Ferrari 458 Spider, has endured more tune-ups than a jalopy.

The seeds of greatness were planted at the age of 19 when Belfort needed 77 seconds to dice Tra Telligman in his UFC debut 16 years and 214 events ago. He’s been a champion at 205 pounds and was the winner of a heavyweight tournament that capped off UFC 12. Still looking to bloom in full, Belfort (21-10 MMA, 10-6 UFC) will headline UFC on FX 7 on Saturday when he faces top middleweight contender Michael Bisping (24-4 MMA, 13-4 UFC) in his native Brazil.

On what’s otherwise a glorious homecoming, one that will be shined and polished if Belfort can spoil Bisping’s pending shot at Silva and the UFC middleweight title, the Phenom is absorbing blows both high and low. Bisping laced into his opponent while penning a column for Yahoo! Sports, but pressed for a response, Belfort wouldn’t bite.

Inside the Octagon, his holy place, Belfort hits back so fast by the time many an opponent exhales he’s staring at the lights. In real life, Belfort is like Jackie Robinson and his famous story of having enough guts not to fight back. Living in hell while living his dream, Robinson, on Brooklyn Dodgers general manager Branch Rickey’s orders, swallowed enough pride to blow off every insult that came with Major League Baseball’s initial integration. Belfort, whose walk with God has provided him innermost peace, refused to play Bisping’s game of volley and serve, not revealing how much he was hurting inside, if at all.

“I don’t care what he says or thinks about me,” Belfort said. “It doesn’t change anything and it doesn’t affect me at all. I don’t really care. I’m not going to entertain his talk. That’s it.”

“And – now we are this close to the fight – I will say that he has heart of a chicken, too. He’s a professional bully. If you let him have his way he will rip you apart in short order, but if you fight back and get him tired, he backs down and does basically nothing.” – Bisping to Yahoo Sports

In 31 MMA bouts, Belfort has 15 finishes in the first round. Half of his defeats have occurred after going a full three rounds, with his most recent setback a submission defeat to UFC light heavyweight champion Jon Jones in round four. Bisping has warned that Belfort has no more than two rounds to win the fight, or he’d make him miserable.

It’s no secret Belfort detonates early and goes for the kill. His last four wins, three via knockout, have come in the first round. Belfort’s age, 35, and mileage, provided a unique challenge for nutritionist and strength and conditioning coach Mike Dolce and “The Dolce Diet.” Belfort’s training regimen for a UFC 153 bout with Alan Belcher was curtailed when a series of unforeseen events led to a title shot dropping in his lap.  Despite the move up in weight and crash course for the seemingly invincible 205-pound champion, Belfort nearly finished Jones in the first round via submission, and took him into the championship rounds before being submitted himself.

“This is the strongest Vitor Belfort I have ever seen,” Dolce said, working off 16 years of observations. “The most confident, athletic and well-prepared he’s been. He sent Jon Jones to the hospital. No other fighter has done that – and Vitor is a middleweight. He can walk back down to that middleweight division and beat every single man down there no problem, considering what he did with Jones.”

Part of Belfort’s stamina issues came down to a matter of training and not so much conditioning. In the past he’s put away sparring partners so quickly, few wanted to engage. And that’s gradually changed once he started working with the Blackzilians in South Florida.

“Anytime you fight Michael Bisping, cardio is an issue, because Michael Bisping does not get tired,” Dolce said. “That’s what Vitor is training for. He’s training for a 25-minute fight. Vitor’s cardio is excellent. This is the lightest he’s been in a training camp, which shows you how seriously he’s taking Bisping.”

“Martial Arts for me … I’m a temple of a living God. Everything I do in that place is a very respectful place. To me, that place is holy. I’m representing God. That’s how I live.” -- Vitor Belfort

Through tragedy with the kidnapping of his sister, Priscila, and a nine-month suspension in 2006 after testing positive for an illegal substance called 4-hydroxytestosterone, the Octagon has been an escape for the Phenom. His TKO of Telligman made him the youngest to earn a victory inside a UFC cage. Among his signature first-round wins have been finishes of Randy Couture – 22 days after Priscila’s disappearance – Rich Franklin, Yoshihiro Akiyama and Anthony Johnson in the last time he fought in his native Brazil. The overcoming of everything from personal trauma to numerous injuries that have attempted to derail Belfort’s charge towards another championship has convinced him to turn over life’s steering wheel to a greater power.

In the present, Belfort is in his best place, fighting solely for the love of the game and not just for the business. He’s not looking ahead, even at the golden opportunity to ruin Bisping’s chances at a title shot. “That’s a question I cannot answer,” he said. “I’m not a promoter, I’m a fighter. My job is to fight.”

The job is done with the guts not to fight back. Next is Bisping and the permission to unleash the warrior within.