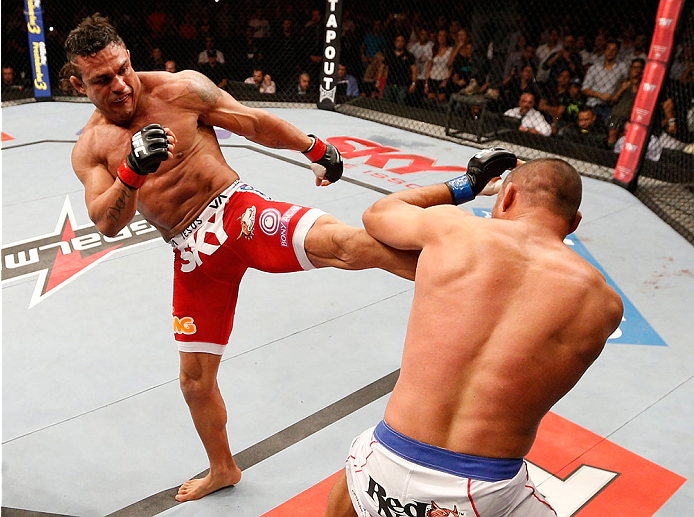 There is something to be said about being able to stand the test of time. Combat sports - much like other forms of athletic competition - is a realm where youth and talent combine to make even the loftiest goals obtainable. Yet, even with the most gifted skill set, the only way a fighter can reap the benefits that come with experience is to put in the time under the bright lights.

Vitor Belfort has been forging his craft for two decades, and is living proof that there is always an exception to every rule. In a game where youth conquers all, “The Phenom” has lived up to his nickname every step of the way. That said, the road the Brazilian superstar has traveled has not been one free of adversity, as there have been numerous occasions where Belfort has had to find the physical and mental fortitude to pick himself up and push forward.

He’s been able to do this because he understands the importance of how each step taken adds up in the greater journey.

“Continuing to progress my skill set is what it’s all about,” Belfort said. “I go to the gym every day and I train with the best guys in the world. I have the best striking coaches and an amazing team of training partners. I’m in there with a great group of strikers, wrestlers and jiu-jitsu fighters who are all pushing me every day and I am in there to learn. When you stop learning you stop evolving. It doesn’t matter how much experience you have or what you know; everyone has something to share. And you learn from that. I’m a craftsman and I’m in there every day evolving and sharpening my sword.

“I’ve been doing this for my entire career. 19 years ago I was a champion at the age of 19, and here I am 19 years later and still at the top of the sport. The game has evolved so much and I’m still one of the best guys. That is because I kept going, evolving and expanding my craft. That’s what I do every day.”

And where fighters are prone to giving in to the trappings of years being stacked up against them, Belfort has shown a refusal to give in to the surge of those tides. Furthermore, his determination has allowed him to not only hold his ground as new generations of fighters continue to rise, but his efforts inside the Octagon have put him in a place where the ultimate goal is now just one fight away.

His upcoming tilt with middleweight titleholder Chris Weidman is set to go down this Saturday at UFC 187, and it’s a moment the Blackzilians representative has been patiently waiting for. The heavy-handed striker and the undefeated champion have been staring down one another for the past 16 months, but a number of obstacles have prevented the two top fighters at 185 pounds from stepping into the Octagon to handle their business.

Now, all the roadblocks are gone, and Belfort’s quest for championship gold will officially resume this Saturday night in Las Vegas. It is a moment the 38-year-old powerhouse has been working toward for years, and he’s confident the goal he’s worked diligently to reach will be conquered at UFC 187.

“I couldn’t be happier than I am right now,” Belfort explained. “My life is filled with joy and I’m very blessed. God blessed me with an amazing family and I have great people all around me. He’s given me great talent and now I’ve been granted with an incredible opportunity. I have worked very hard for this and I honestly take things one day at a time. I control what I can control and make sure to enjoy what I do.

“[Weidman] is actually not on my mind at all. I’m in control of my mind and he’s nowhere to be found in there. He’s just my opponent and I’m going to have to fight him for 25 minutes. I’m not into the talking and all that. The way I promote my fights is with my skills inside the cage. I have respect for every opponent that I fight. I know what it takes to step into the cage and fight and that is why I respect them.”

While he will have the opportunity to accomplish the next immediate task of his career on Saturday, Belfort believes he’s already won in the long view of the bigger game. He’s already spent a large portion of his life testing his will against other elite-level fighters inside the Octagon, and has navigated that process with great success.

Yet, in his mind there is a greater achievement that lies beyond wins and losses. When one can reach a place where happiness is found above all else, that’s where Belfort believes the real championship can be found. Granted, he’s going to give everything he has to give at UFC 187, but the ultimate goal has already been reached.

“I’ve accomplished everything an athlete can accomplish in this sport,” Belfort said. “Now, the thing I set out to accomplish is to have joy in everything I do. I’ve discovered in life that you need to appreciate and make the most of every opportunity you come across on a daily basis. It doesn’t mean every day is going to be great, but the important thing to have is gratitude. I’m alive and I can breathe and I can walk. I can feel I can love. When you get the understanding that everything comes from love then you have really accomplished something.

“I have been doing this for 25 years of my life. I was a champion at 19 years old. It’s a great accomplishment to still be at the top of the game and I have a lot of gratitude because of it. I’m very grateful God has blessed me with this opportunity. Winning the title will be all the hard work paying off. Being a champion is all about how you live your life. It’s much more than how you are on one day…it’s how you live your life every day that matters.”