Read on for the latest installment in UFC.com's weekly series of articles on proper nutrition from the biggest names in mixed martial arts...this week, Vitor Belfort 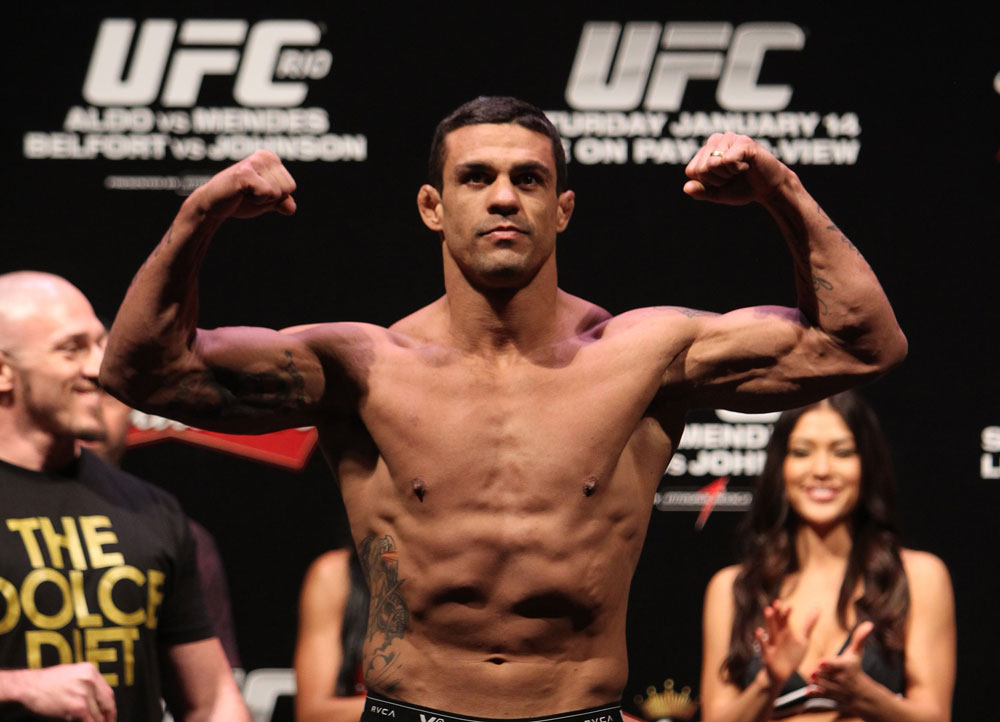 Former UFC champ, UFC 12 Heavyweight tournament winner, ADCC bronze medalist. When it comes to amassing prestigious titles and honors in the martial arts, Vitor Belfort has few equals. Roughly 16 years into his illustrious pro career, the Carlson Gracie protégé is still going strong, still owner of some of the speediest and most feared hands in the game. While Belfort has been sidelined by a broken hand that scratched him from the long-anticipated rematch with Wanderlei Silva, I caught up with the Las Vegas transplant for insights into the food that has fueled his career, as well questions about what the future holds for “The Phenom.”

UFC: Since moving to America do you eat a lot of the same foods or has your diet changed?
Belfort: I moved to Los Angeles when I was 17 (18 years ago!). I struggled (financially) when I first came to America so I had to eat whatever I could afford. I used to eat a lot of Italian food because there was a restaurant close to the gym and I love Italian. I would eat a lot of pasta and meatballs. I became friends with the people at the restaurant and they really helped me, like, ‘Come here tomorrow and we’ll give you lunch.’

What persuaded you to move to America in the first place?
There was a Brazilian guy who was willing to open a gym for Carlson (Gracie). I said, ‘Let’s go. I’ll become the UFC champion pretty soon and if we want our name to be recognized then we’ve got to be there fighting in UFC. Fighting Vale Tudo in Brazil is not going to take you anywhere.’ I had that vision so he followed and said, ‘Ok.’ When we came it was really powerful.

Were there ever days that you went hungry?
I had no money, no anything. It was hard. But I always had a way to eat. I never starved because I worked my a— off. I traded meals for (teaching) class. ‘You pay for my lunch and I’ll teach you.’ We’d go to the Italian restaurant and I’d eat a salad, pasta and meatballs. I had a lot of good friends and people to help me. It was the American Dream.

How heavy were you when you fought at heavyweight?
215. That was the maximum I’ve ever weighed. Today I still weigh 215 (chuckles)! I’ve never weighed more than that. I have changed my diet a little, especially when I start getting close to a fight I start eating clean. I love coffee. I drink coconut water and green tea, too. Everything I cook I use coconut water or peanut oil because it doesn’t break down into fat. I eat a lot of fruits, vegetables, oats, chicken, fish, quinoa, cashews and almonds. I drink a lot of water each day – maybe two gallons a day. The week of the fight I cut like 20 pounds, so …

Do you drink alkalized water, or water with electrolytes, or just regular spring water?
Regular water. I drink about 2 gallons of water a day.

Have you ever worked with a nutritionist?
Yes, I’ve worked with Mike Dolce for my diet and nutritionists in Brazil. I’m always asking the experts what are the best things I can do, you know? I don’t do things on my own, it’s not healthy. A guy at my level cannot make mistakes.

Mike (Dolce) works with me before every fight and he’s helped me a lot. I eat five meals a day. He doesn’t let me eat pizza, pasta and all that stuff. I’m a professional; I only eat what he tells me to put me in my mouth.

I read somewhere you stating that you would eventually like to return and fight at light heavyweight. Is that true?
Yeah, eventually. But I want to keep fighting and try to have one more chance at Anderson’s belt. I’m out to accomplish goals and I have that goal set in my mind.
When you get older your metabolism is not the same. Age catches up to each one of us. You just have to be mature, disciplined, focused and committed and you’ve got to accept it. You know, life is made up of seasons: Summer, winter, spring and fall. I am getting older and I accept that. I don’t suffer as I get older. I like to see my kids growing up and getting older. I like to see the fighters getting better than myself. I like seeing the sport grow and get to the place that I always dreamed. I like to see that I became an inspiration for a lot of these kids … and when I see them I’m not ashamed to tell them, ‘Man, I’m a big fan of yours.’

Do you take supplements? Whey protein? Branch chain aminos, glutamine?
Not a lot. I’m a big vitamin guy. I used to be but now I’m into eating food instead of supplements. Mike Dolce got me into that, eating what comes from the earth – the fish, the chicken, the meat. That’s what he wants me to eat right after my workouts.

How often do you get to eat Brazilian food now?
Every day! I’m a Brazilian guy and Brazilian food is very simple to make… but not very often during camp because you must stick to the diet. But right now as we’re talking I am headed to the Churrascaria. I’m going to get the steak, filet mignon … it’s going to be good, buddy.

Brazilians love their Acai and it’s become popular here in the U.S. and praised as a Superfood. Acai has to be in your diet, right?
Bony Acai is the best Acai. I only drink that kind because it’s organic and it has no sugar, no nothing. It’s completely natural. So I can drink that during my camp.

What did you grow up eating in Brazil?
I was always competing so I had a lot of good friends that helped me to stay out of trouble. I was always at a friend’s house or doing sports.

The foods in Brazil are so rich with all kinds of vegetables. I always ate a lot of vegetables and fruits. My mom made a lot of soups for me. We used to climb trees to get coconuts. It was pretty cool. It’s hard to climb those trees but it’s good for fighters.

You have publicly said that you only want to fight guys that bring you closer to a title shot. Implication: A fight with Wanderlei Silva – even though fans are craving to see a rematch – might not accomplish that. You’d rather fight a bigger name.
If Wanderlei would have won that fight then … but he really got dominated by Rich (Franklin), who hadn’t fought in a year and is not even the top contender. Of course Wanderlei and I did the reality show, and it sucks that I got injured, but a lot of things change, you know?

I think everybody can tell that I am the guy who can give Anderson a good fight. And I think the fight that we had was too quick. Of course he won, and did great, but I think I can do good against him. Of course age is starting to catch up with me but I think I deserve one more chance to go for the belt. I think I’ve done great; my last eight fights I’ve only lost once. So my next opponent I want to be somebody else who is on a roll. You have guys in the division like Mark Munoz, who, if he wins against Chris Weidman, will have his third straight win. I’ve won seven of my last eight, so I think I am one of the top contenders. So I’m looking for someone who will give me the opportunity to get another title shot.

You have fought Alistair Overeem twice. If he winds up fighting Junior dos Santos, who do you like in that matchup?
Alistair is well-positioned in that division. He has a lot of good skills and he’s very dangerous. But at the same time, Junior dos Santos is a strong guy – he’s sooo powerful and fights with a lot of conviction and discipline. It can go either way. It’s two champions fighting each other. If Dos Santos puts the pressure with his boxing, then he can end the fight pretty quick. But I’m curious to see how Alistair presents himself. But Junior dos Santos first has a big challenge in front of him in Cain Velasquez.