"I’m focused on what I have to do to win, and I’m looking to finish.
That’s how I’m stepping into the Octagon that night – I’m looking to
finish him.” - Vitor Belfort 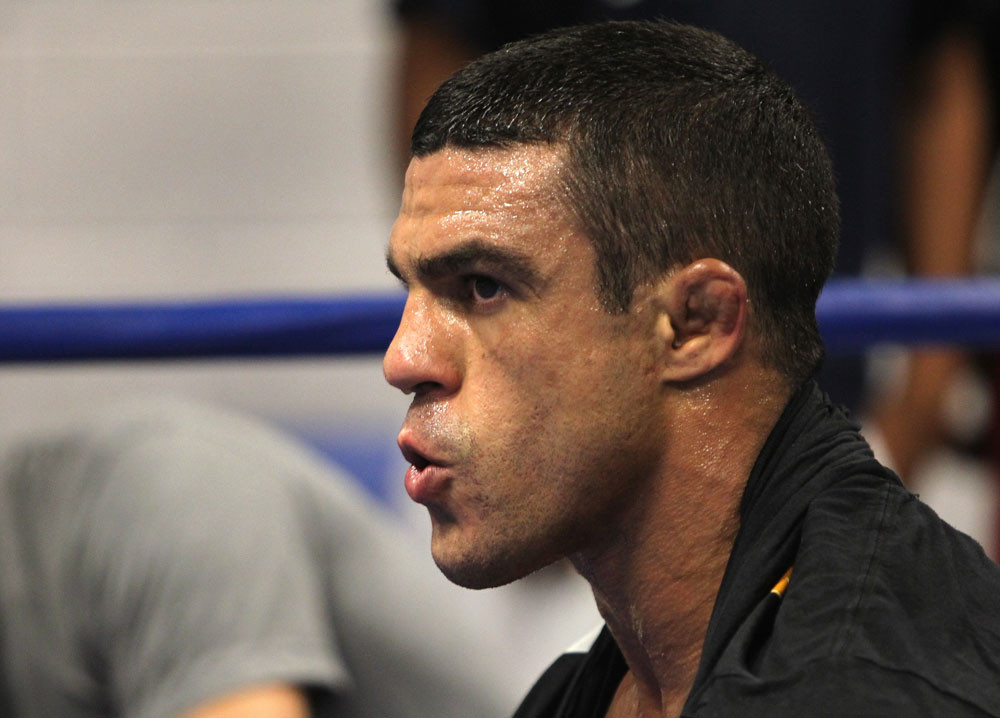 Vitor Belfort isn’t going anywhere. Despite his UFC 126 loss to Anderson Silva in their middleweight championship bout this past February, “The Phenom” is not about to let the longtime titleholder off the hook just yet. He’s still shooting for Silva, and that’s not just the word from the UFC vet, it comes from the whole family.

“In my house, we don’t accept the word ‘impossible,’” said Belfort. “If we want to do something, we’re gonna go to the end. We need to understand that losing and winning is part of life, but giving up is not a part of our lives. ‘What’s next dad, when are you going to have a chance to fight him again?’ That’s the question my son (Davi) asked me. That’s the way we see life here, as a positive. We recognize that he was the better man on that night, and the only thing he landed, he landed pretty good, and he won the fight.”

One of the most highly-anticipated title fights in years, Silva vs. Belfort matched up two countrymen with dynamic styles, long histories of excellence, and a little bit of heat. It made for an explosive encounter, but it was Silva who detonated the bomb, catching Belfort with a front kick that has earned plenty of consideration for 2011’s Knockout of the Year. It was a crushing end to Belfort’s five fight winning streak and his attempt to join BJ Penn and Randy Couture as the only fighters in UFC history to hold titles in more than one weight class. But the former light heavyweight champion has no sour grapes about the defeat.

“I went there to knock him out and he knows that, but he caught me with a very strange kick, and I believe it was the best knockout of his life,” said Belfort. “He knows the pressure was on his shoulders and the night shined for him. What can I say? I just have to recognize that and go back and work hard to have another shot. That’s the only thing you can do. No regrets, I did my best, I corrected the mistakes that I made and I try to improve myself every day in the gym.”

Now 34, Belfort is a far cry from the precocious 19-year old he was when he made his UFC debut back in 1997. He was a self-admitted “hot head” back then, a kid who believed his newspaper clippings until he started to get dealt some heavy doses of MMA reality. Some don’t come back from that tough love the fight game likes to issue out, but Belfort survived, dusted himself off, and while he has had erratic moments over the years, his recent run, which included first round knockouts of Matt Lindland and Rich Franklin, has rejuvenated his career.

As for life outside the Octagon, that has changed considerably as well. Belfort is a family man, married with three children, and his faith has taken precedence for him in his life. That’s not to say he’s perfect.

“I’m real, I make mistakes, I make bad decisions sometimes, but the key is to always try to live what you preach,” he said. “One day I’m gonna finish my career, but I don’t want to be like the leaders today in politics and sports. They shine on the field, and it doesn’t matter if it’s in golf, or American football, or on the soccer field, they have millions of followers but miserable lives. They’re not faithful with their own families, they’re not faithful with their own convictions, so they’re a bunch of liars. I don’t want to be that way. I want to succeed in my private life so then it can be a reflection on my public life.”

That public life continues this Saturday in Philadelphia, when he takes on Yoshihiro Akiyama in the UFC 133 co-main event. It’s a pivotal battle, not just to see who moves forward in the division, but to see how Belfort reacts to what may be considered the first true knockout defeat of his career (his TKO losses to Randy Couture were more due to an accumulation of strikes and then from a doctor’s stoppage in their third bout). He is saying all the right things though, so it appears that he’s put the loss in the rearview mirror. And the way he sees it, there’s no point in wondering what might have been. You have to live with what was.

“You cannot live by expecting things that were meant to go a different way,” he said. “You have to live according to the things that happened. If I knocked him out, it would have been totally different. If I connected my punch, he would be out. So the key is to be focused and deal with the things in your life. Don’t ever let the mind defeat you. In my mind, I’m unbeatable. It doesn’t matter the situation, I’m always going to have the mentality that nothing is impossible for myself.”

In Akiyama, Belfort has the perfect foil for a memorable return. The Japanese contender is aggressive, he refuses to take a backward step, and he has an undeniable will to win. If Belfort is on, it could be a short night for Akiyama. If the Brazilian is not on top of his game, expect a 15 minute war that could go either way. Belfort, while respectful of his foe, knows which way he expects the bout to go.

“He’s a very tough fighter,” said Belfort of Akiyama. “He’s well-rounded, he can take a punch, he can exchange, and he’s really dynamic. But my mind is tougher than ever. It’s so strong that no man can stop me. I’m focused on what I have to do to win, and I’m looking to finish. That’s how I’m stepping into the Octagon that night – I’m looking to finish him.”

Even if you ask Belfort about a possible return to 205 pounds in the future, he’s adamant that the only goal is another shot at the middleweight belt. And to get on the road back there, he has to get by Akiyama first.

“We have a goal,” he said. “We’re gonna go to the end. Nothing can stop me. I have Akiyama now, he’s my next opponent, and I’m looking at him as being in front of my goal.”

There are usually doubts in a fighter’s mind, words, or actions in the period between a devastating loss and a return to the Octagon. Belfort has no such questions to answer for himself. The way he sees it, when he’s firing on all cylinders, he can’t be stopped, and he’s not shy about letting the world know it.

“I’m always climbing a mountain and I’m not giving up,” he said. “I want to reach higher and nothing can stop a man when he puts in his mind and his heart that he wants to do it. I’m on my way right now.”