Virna Jandiroba Wants To Express Herself

After Bouncing Back From A Loss, Virna Jandiroba Hopes To Continue To Show Her Evolution At UFC 267
By Gavin Porter, on Twitter @PorterUFCNews • Oct. 28, 2021

A tough decision loss to Mackenzie Dern changed things for Virna Jandiroba. The Brazilian strawweight reached the UFC and secured a top 15 ranking by relying on her jiu jitsu background and toughness, but the Dern fight taught her that she needed to make some alterations to her approach. If she could do that and look at fighting as a fight rather than a competition, then she would be more successful inside the Octagon.

That’s exactly what Jandiroba did in her fight with Kanako Murata. She treated it as a fight and won by doctor’s stoppage after Murata suffered an elbow injury which stemmed from an armbar applied by Jandiroba.

“It was the breaking of some beliefs that I had. I was the jiu jitsu girl all about the gentle art. I never really allowed myself to be aggressive to express myself inside the Octagon,” Jandiroba told UFC.com. “So that fight with Mackenzie was a turning point.” 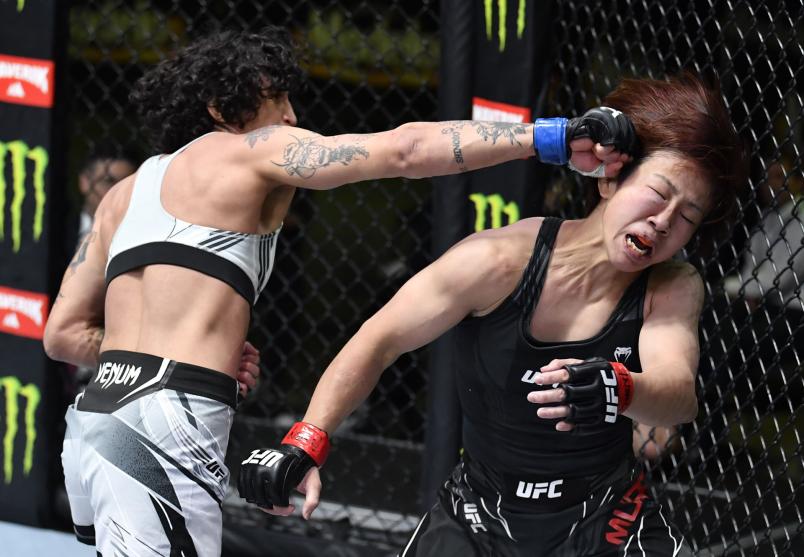 Virna Jandiroba of Brazil punches Kanako Murata of Japan in a strawweight bout during the UFC Fight Night event at UFC APEX on June 19, 2021 in Las Vegas, Nevada. (Photo by Chris Unger/Zuffa LLC)

Jandiroba’s next chance to express herself inside the Octagon comes at UFC 267, where she faces fellow contender Amanda Ribas. She’s expecting Ribas to come into the fight hungry to bounce back after losing to Marina Rodriguez her last time out. Jandiroba not only welcomes the challenge, but she plans to make a statement with her performance.

“She is coming from a loss so I think that she will probably come in a kind of survival mode. That’s the way we behave. We want to win. There is someone with a big dream across from you with big goals and I think that’s the reason it will be a great fight,” Jandiroba said. “Both of us signed a contract and both of us want to win. So, let’s do it.”

Part of Jandiroba’s confidence comes from her impressive win over Murata and from her newfound mentality. But mentality changes aren’t the only upgrades that Jandiroba has made since facing Dern, as she’s focused heavily on improving her striking so that opponents can’t anticipate her next move.

And it’s paying off. 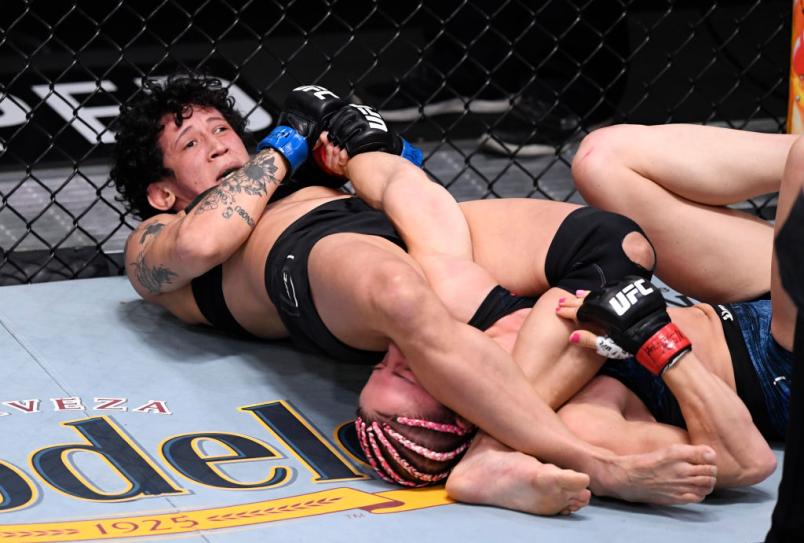 Virna Jandiroba of Brazil secures an arm bar submission against Felice Herrig in their strawweight bout during the UFC 252 event at UFC APEX on August 15, 2020 in Las Vegas, Nevada. (Photo by Chris Unger/Zuffa LLC)

“It’s way more comfortable to come from a win. It gives me more comfort. I’m feeling well and confident and I’ve been learning a lot. I’ve been training a lot and I’m evolving a lot. This gives me a lot of security to get in that Octagon on Saturday,” Jandiroba said. “I’ve been changing a lot of my beliefs. Before I was predictable in the sense that everybody knew that I was going to take them down, but they didn’t know how or when I was going to do it. But now I have different weapons and I think it’s very interesting to reinvent yourself. Be water, right? Be water, my friend. That’s the path that I’m following.”

Jandiroba has her sights set on cracking the division’s top 10 and announcing herself as a true contender at 115 pounds. She only has five UFC fights on her resume and has competed against ranked opponents such as Esparza, Felice Herrig and the aforementioned Dern. A big win over Ribas would help her make that push and put her right where she wants to be heading into 2022.

All that’s left for her to do is make the walk and express herself.