Virna Jandiroba Is Ready To Make Her Run

Brazilian Strawweight Virna Jandiroba Believes She Is Primed For A Big Run Starting At UFC Fight Night: Blachowicz vs Rakic
By Zac Pacleb, on Twitter @ZacPacleb • May. 12, 2022

Virna Jandiroba hasn’t had the flying start to her UFC career some might’ve imagined for her when she joined the promotion in 2019, sporting an undefeated record littered with submission wins. Through six fights, she is a split 3-3. Her highs have been high – all three wins were stoppages – and frankly, her lows haven’t been all that low.

Losing to now-champion Carla Esparza, as well as dropping competitive decisions to Mackenzie Dern and Amanda Ribas, isn’t any reason to jump off the bandwagon, but Jandiroba is eager to kickstart some momentum up the vaunted strawweight ladder.

“I believe we must understand the process and accept defeat,” Jandiroba told UFC.com. “We have to accept it and try to deal with it the best way we can. I think that was the biggest lesson I learned. When it comes to being resilient, us Brazilians have this kind of mindset of overcoming things. I think we’re really good at it.”

Fight week is always a happy week for Jandiroba, especially as she readies to fight veteran Angela Hill, who is also looking to rebuild some steam in the division. 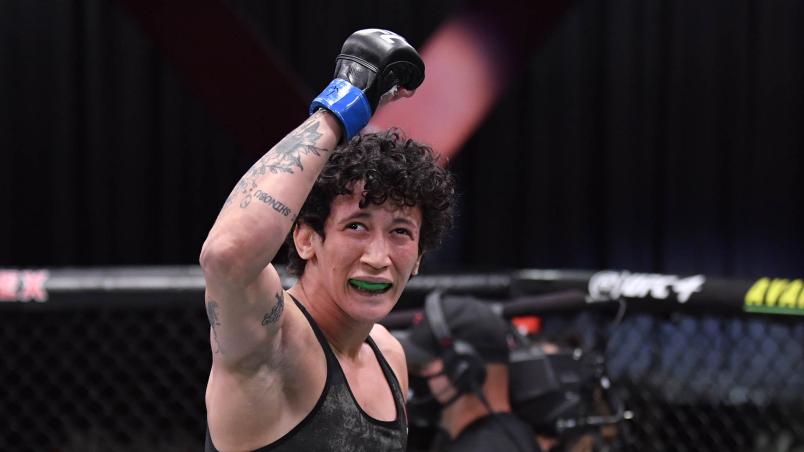 Virna Jandiroba of Brazil celebrates after her submission victory over Felice Herrig in their strawweight bout during the UFC 252 event at UFC APEX on August 15, 2020 in Las Vegas, Nevada. (Photo by Jeff Bottari/Zuffa LLC)

It’s a strong test for Jandiroba, whose game primarily centers on grappling and jiu jitsu wizardry – 13 of her 17 pro wins are by submission – and she anticipates a tall task in getting Hill to the ground.

The fight projects as the classic striker-vs-grappler scenario, although Jandiroba showed a propensity and willingness to throw down on the feet, especially against Dern. On the flip side, Hill’s development as a fighter has shined brightest in her ability to thwart those who want to get her to the ground.

In preparation for the matchup, Jandiroba said her camp was about “going back” to her roots and believing in them, so she focused a lot on the grappling aspect of things. Putting that in practice against Hill, she notes, requires a lot of attention to detail and an awareness of the moment-by-moment flow of the fight. 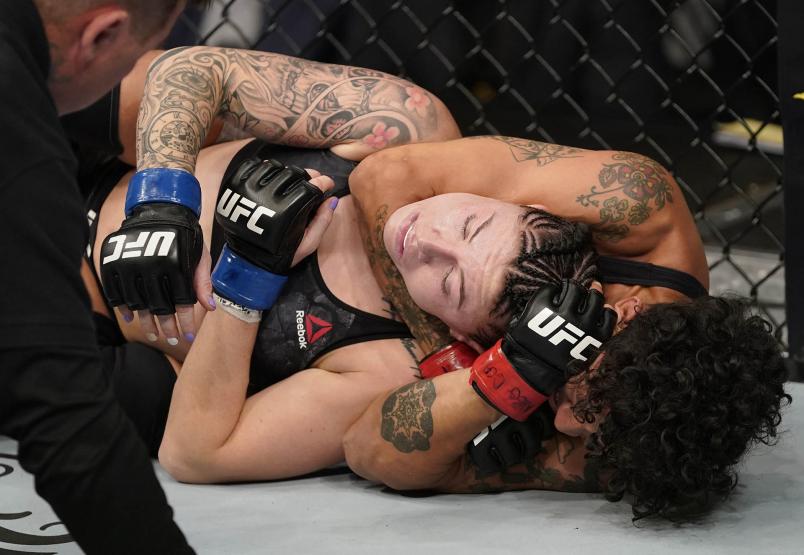 “(Hill) throws a lot of volume,” Jandiroba said. “She starts winning points and enjoying the fight, and that’s the danger, letting her get comfortable and start enjoying the fight. She knows how to win points, and she moves really well. I think that’s the biggest challenge.”

The stakes are relatively clear for both fighters on May 14. A win stops the tires from spinning and sets the victor up for a Top 10 matchup. A loss puts things in a more perilous position.

If those stressors are impacting Jandiroba at all, she isn’t showing it. It’s a fight week, which she says has “deep meaning” for her, and plainly, she just has fun with the whole pomp and circumstance of the leadup to the fight. “Carcará” won some fans over in her last fight when she walked out to the viral song “I’m An Island Boy” by Flyysoulja – a one-time deal, so she says – but hopes her fighting does the all the talking necessary this time around.