Vinny Magalhaes: Leaving Nothing Up to Chance

"The last fight was embarrassing, so I really need to go there and make a
statement. I have to beat him, and it ideally has to be quick." - Vinny Magalhaes 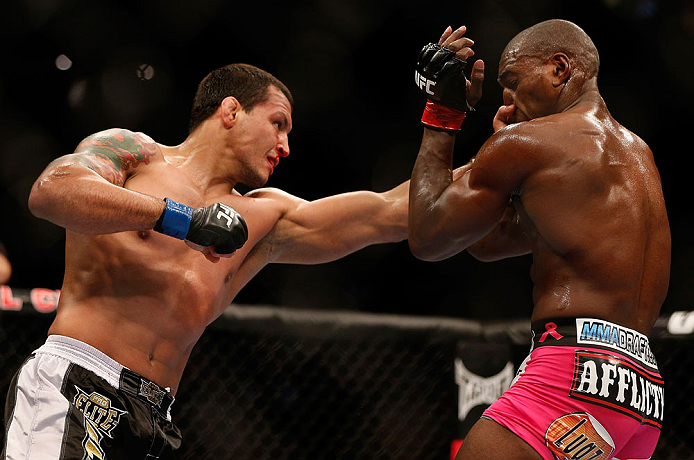 Vinny Magalhaes was devastated. He had just lost a three round decision to Phil Davis at UFC 159 in April, just two fights into his return to the Octagon after a three-plus year absence, and when he saw UFC matchmaker Joe Silva a couple hours after the fight, he braced himself for more bad news.

“You’ll get another chance,” the matchmaker replied, but those words have echoed in the mind of the Brazilian ever since that night in New Jersey. And as he approaches his Saturday bout with Anthony Perosh in Rio de Janeiro, the former Ultimate Fighter finalist hasn’t stopped thinking about them.

“It’s probably gonna be my last chance if I don’t win,” he said. “And I’ve been thinking that way since that night. Even if it wasn’t Anthony Perosh, whoever the UFC gave me now, I would be trying to make a statement. It’s nothing personal against Anthony.”

Magalhaes did take it personally when Perosh called for a bout with him, but the 29-year-old is looking forward to making his foe regret that decision this weekend. “I feel like this is a good fight for me, even though he doesn’t think away by calling me out right after a loss. He probably thinks that he can go and run through me.”

The decorated grappler probably wouldn’t even blame the Australian for calling him out based on his last performance against Davis, a frustrating three rounder that marked Magalhaes’ first loss since 2010.

“That fight wasn’t just about losing; it was the way I lost,” he said. “It was embarrassing. I got a little frustrated because things weren’t going my way, but something in my mind was telling me that I could catch him and I kept trying the same thing, even though the same thing wasn’t working. And the way I fought overall was awful. The fight didn’t go the way I expected at all. I should never lose to anybody the way I lost.”

You can tell by the tone of his voice that the defeat is still a sore point with him, a night he won’t ever get back. But with his insistence that he would eventually catch Davis, did he long for the old days of the UFC with no time limits?

“I don’t even think that would be the case,” he said. “The way I was thinking in that fight, I probably would have kept doing the same thing for like an hour. I was not thinking straight.”

Magalhaes laughs, bringing some levity to the topic, and he admits that in addition to him having an off night, “Mr. Wonderful” was certainly on when the bell rang.

“He (Davis) looked really good, so it’s hard for me to say I lost because I made mistakes; it’s also because he looked better.”

What Magalhaes does promise is that you won’t see that type of fight like that this weekend or on any weekend moving forward.

To add to the positive vibes around these days, Magalhaes will also be competing in his home country for the first time as a pro mixed martial artist. For someone used to fighting on the road, this isn’t a pressure-filled occasion, but a welcome one.

“People keep asking me if there’s more pressure to be fighting in Brazil, and actually it’s totally the opposite,” he said. “It’s more like a motivation type of thing. Throughout my whole career, I’ve been the foreigner. When I was in Russia I was fighting the Russians, my whole career in the States it was the same thing when I was fighting the Americans. Now, I’m the guy that’s fighting in my hometown, so I’m the one that will have the support from my friends and family, and of course the fans. So for me it’s more motivation, and it should be real exciting.”

“Me and Anthony have a pretty similar style, and we’re both jiu-jitsu black belts,” he said. “Of course I can’t lie about it and be too humble about it, but I do have better credentials than him as far as grappling. And I feel like even when it comes to MMA, I do have more tools to use on the ground than he does. There’s also the fact that I’m younger, so I feel like I have some advantages there too.”

Not that he plans on sticking around too long.

“The last fight was embarrassing, so I really need to go there and make a statement. I have to beat him, and it ideally has to be quick.”