"Phil is one of those guys that buys his own hype. I think Phil’s good, but I don’t think he’s as great as he thinks he is." - Vinny Magalhaes 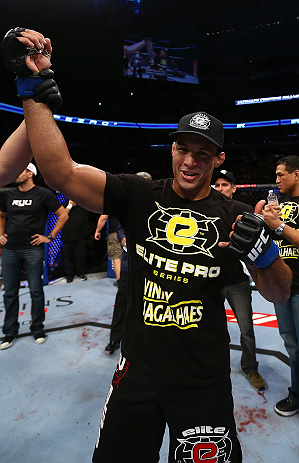 With an 8-2 record and a spot on the UFC 159 main card this Saturday night against Phil Davis in the time since his Octagon debut in December of 2008, Vinny Magalhaes can afford to chuckle about his first time fighting in the UFC.

“When I fought (Ryan) Bader, it was in The Palms and there were 3,000 people there, maybe not even that, and it felt like I was fighting in a soccer stadium in front of over 100,000 people, and I felt like the cage was a soccer field,” said Magalhaes of his Ultimate Fighter 8 final against Bader, who took just 2:18 to stop the Brazilian and begin a two fight UFC skid for him that resulted in his being cut from the organization.

Yet what could have been the signal for Magalhaes to return to the grappling circuit he dominated and get on with a career of teaching jiu-jitsu, the second degree black belt under Vinicius Aieta and Royler Gracie decided to hone his striking game, continue to develop his ground attack, and begin again.

He would go on to win seven of his next eight bouts, earning a return call to the UFC for a bout last September against Igor Pokrajac. This time when he stepped into the Octagon in front of nearly 17,000 fans at Toronto’s Air Canada Centre, the feelings were a lot different than they were in 2008.

“It was something that shocked me,” said Magalhaes. “When I stepped into that cage it looked like I was in the gym, like literally fighting in front of all the people in the gym. It was easy to get in there, and that was the total opposite of when I had my first UFC fight. So it was a totally different experience, and it was easy for me to fight and easy for me to think about what I was doing.”

He looked it, and he made it look easy, submitting the always tough Pokrajac in the second round.

“At this level, I believe that most of the time you go to a fight and you plan something and think about what you’re gonna do,” said the 28-year-old native of Rio de Janeiro. “Most guys, when they say they’re ready for any kind of fight, I think that’s a lie. You’re definitely going to be studying your opponent’s game, and making a game plan, and at least you’re going to have a game plan to start. If things don’t go your way, you might have to change, but at this level, everybody makes a game plan.”

Magalhaes had one as well, and that went out the window early when Pokrajac surprised him with his plan of attack. It was another example of the beauty of the sport, where what many deem simply a fistfight turns into a form of high stakes chess with four ounce gloves on. In a game like that, it’s the one who can adjust the best that wins. On that night in Ontario, it was Magalhaes.

“For that fight, my plan was to do something totally different and for some reason Igor decided to grab me, which made me go for Plan B, which was also much better because when he decided to take me down, it was more like now he wants to play my game, which made things easier for me,” he said. “But that was not my plan; my plan was to go there and try to strike my way into the takedown and work for a submission from the top.”

He got the tap anyway, finishing things off with an armbar. It was something he might not have been able to pull off four years ago, but that’s what time, fights, and experience can do for you. The question is, did Magalhaes learn enough during his time in the MMA wilderness to be able to do the same thing to Davis this weekend? He must think so, because as soon as “Mr. Wonderful” saw a December bout with Forrest Griffin get scrapped due to an injury suffered by the former light heavyweight champ, Magalhaes took to Twitter to ask to step in.

Well, it was a little stronger than simply asking…

“I think if I was all nice about taking the fight, I don’t think it would have happened,” said Magalhaes, who has apparently learned his lessons well from occasional training partner Chael Sonnen. “So I think I took the right approach by calling him out.”

It worked. And while he didn’t get the fight in December, the two light heavyweights will collide this Saturday, and even though fighting someone the caliber of Davis wasn’t his original plan, again, he’s adjusting on the fly.

“At first I wanted to fight guys that are around that range (as Pokrajac),” said Magalhaes. “Igor was coming off three wins in the UFC, so he was nowhere near the top ten, but he was one of those guys who was one or two wins away from fighting top ten guys. He was in the middle of the division, so I felt like since I beat him, I’m taking his spot and it might be time for me to start fighting those guys. Then I see a guy like Phil Davis available to fight. He might be well-ranked and all that, but stylewise, he was the right guy. He’s still developing his fighting game and he likes to play the grappling game. And he’s a wrestler, so eventually he’s gonna try to take the fight to the ground, so that’s why I decided to go a little bit further with my goals and try to fight a guy that was well-ranked. It wasn’t about rushing into title contention; it was about him being available.”

It’s also because Magalhaes feels that in a ground fight, not too many people can last with him for very long. It’s kind of like Pat Barry’s comment that many fighters fancy themselves strikers until they get hit by a real striker. Magalhaes subscribes to that theory when it comes to jiu-jitsu.

“I have the results to prove it,” he said. “It’s not just about me having the time and the experience. It’s about the results and the level that I reached. I’m not just one of those guys that have been training for so long; I’m one of those guys that have got good world-class results for so long. I’ve been getting gold medals in the world championships since I was 18 years old. I won the ADCC, which is the world’s toughest tournament in no-gi grappling. As for Phil, he does have a few submissions in the UFC – Gustafsson, Tim Boetsch, and Prado – but here’s the thing: when he beat Tim Boetsch, he went against a guy that didn’t have great skills on the ground. He’s a tough guy, but he’s not known for being a great technician and he’s at middleweight now. Then he goes against Brian Stann, he dominates him on the ground but didn’t get the submission. And I look at it this way: Krzysztof (Soszynski) was able to easily submit Brian Stann, but Phil Davis wasn’t able to. Then he fights Gustafsson, and at the time I think Gustafsson was just too green to compete at that level against really good wrestlers and grapplers. So in my opinion, that fight doesn’t count much about his submission skills. Then he fought Wagner Prado, who had eight fights and all his fights before the UFC were against guys with losing records, and then he goes there and submits the guy, but to me that doesn’t mean anything. Phil is one of those guys that buys his own hype. I think Phil’s good, but I don’t think he’s as great as he thinks he is.”

One way or another, Magalhaes expects to find out the truth this Saturday night. But win or lose, the one thing he’ll guarantee is that he’s not going to get submitted.

“There’s no way that a guy with Phil Davis’ skills as far as the ground game is going to be anywhere near getting a submission over me,” he said. “No way.”