Vinny Magalhaes and the Long Road Back

"It’s a tough division, but I see that I can fit around the top, and that’s what I’m going after." - Vinny Magalhaes 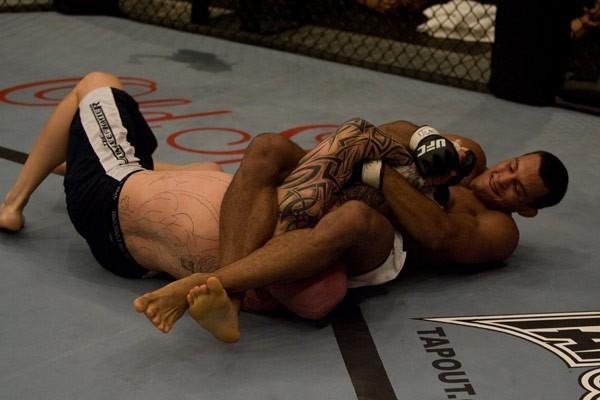 When Vinny Magalhaes’ first stint with the UFC ended after a loss to Eliot Marshall in April of 2009, many didn’t expect to see him back. At the time, his record was 3-4 with 1 NC, and to earn another contract with the organization, there would be not just months full of work, but possibly years.

Some would have accepted that harsh reality and walked away, especially someone of Magalhaes’ stature on the grappling circuit. Why put yourself through that kind of daily torture in the gym if you can walk onto a mat and win jiu-jitsu tournaments with relative ease? But what people failed to realize is that to reach the heights as a jiu-jitsu player, Magalhaes had already put in years of work, honing his competitive spirit with each passing belt rank and tap out. And as a true competitor, losing only sparked him to work harder.

“As a competitor, I don’t think you ever expect to lose, but I was living a different reality,” said Magalhaes, who made it to the final of The Ultimate Fighter 8, only to lose to Ryan Bader and then Marshall. “Back then, when I got on the show, I was literally just doing jiu-jitsu. Then I leave the show, and then I started training for MMA. If you think about it, from the show to the Bader fight, I had six months as a mixed martial artist, and you’re not gonna win anything in this sport if you’re not well-rounded. So when I took the fight against Bader, I was still a jiu-jitsu guy getting into MMA and I wasn’t prepared. It’s not like I was expecting to lose, but I deserved to lose.”

Raw in every aspect of the game except jiu-jitsu, Magalhaes, then 24, still was able to use his specialty to finish Lance Evans, Jules Bruchez, and Krysztof Soszynski in successive fights on the show. Bader would not be number four though, as he stopped Magalhaes via strikes at 2:18 of the opening round. Four months later, he dropped a decision to Marshall in a match that never seemed to get out of the starting gate. Some questioned the call, including Magalhaes, but no one lost too much sleep over the verdict.

“It was a close decision, and it’s still a loss on my record, but I thought it was a fight that I should have won,” said Magalhaes. “Still, I think losing both fights and getting dropped by the UFC were good for me, so I had time to refocus and think about what I really want to do, and MMA was always my choice.”

Having hit the top in terms of making it to the TUF8 final, and then the bottom as an unemployed prizefighter, Magalhaes got down to the business of learning every aspect of MMA. Along the way, he noted everything people wrote and said about him for future reference.

“A lot of people labeled me as a guy who doesn’t like to get hit because of that fight (with Bader), so it was not easy to swallow,” he said. “But it was a good wakeup call to see what I wanted to do. If that’s what I really wanted, I have to focus like a professional. I can’t just be doing this and trying to do jiu-jitsu and a bunch of other things at the same time. It was MMA or just give it up and go back to jiu-jitsu. And at that point I was just loving what I was doing, which was MMA, so it was not a hard choice to make.”

Six months after the Marshall fight, in October of 2009, Magalhaes returned to active duty with a 73 second submission of Chris Davis. He took six seconds longer to finish UFC vet Mike Nickels two months later, and the comeback was in full swing. Of course, getting his wrestling and striking up to par wasn’t easy, but it was necessary for the BJJ black belt under Vinicius Aieta and Royler Gracie.

“If I was a wrestler, I probably could do the sport for at least a couple years as a one-dimensional fighter,” he said. “I could just take people down and get the decisions, but I had the worst background. You’re not gonna fight jiu-jitsu on your feet. (Laughs) No matter how good my jiu-jitsu is, if I can’t take the fight to the ground, nobody’s ever gonna see my jiu-jitsu. The same thing with the strikers – if you only have good striking, all you have to be able to do pretty much is get the distance and defend takedowns, and you might be able to survive a fight. But having a jiu-jitsu background, no matter how good you are, if you can’t close the distance and take the fight to the ground, there’s no way you can show how good you are.”

A decision loss to Pedro Galiza in March of 2010 slowed his progress, but when he came back after a nine month layoff he began a five fight streak in which he went unbeaten, won an M-1 Global title, scored three submission wins, and even added two knockout victories.

By then, the doubters started to disappear, while his supporters called for a return to the UFC. But as Magalhaes notes, his current fan support was hard won.

“It took a lot of work to change people’s minds, especially after the Bader fight,” said the 28-year-old native of Rio de Janeiro, Brazil. “The thing I would read the most about me was, ‘this guy is a really good jiu-jitsu guy, but he doesn’t like to fight and he doesn’t like to get hit.’ Then I won a few fights and things started to change. They said, ‘he’s good but he’s not that good.’ Then I’d win a couple more fights and they’d say, ‘well, maybe Vinny should get a couple more wins and go back to the UFC.’ Then I win a title and win a couple more fights, and then everything changed.”

“It was a long process.”

He’s here now though, brought in to face Croatia’s Igor Pokrajac on Saturday’s UFC 152 card in Toronto. It’s not an easy assignment, as “The Duke” is on a three fight hot streak, but Magalhaes is confident in his abilities and his chances.

“That’s the kind of fight I wanted,” he said. “I wanted a guy who was coming off a win, and Pokrajac was the perfect guy. He’s coming off three wins, now there’s some hype on him, but as a fighter, I’m trying to find the hype. I get the wins, his record is way better than mine, but a lot of people are impressed by numbers.”

Don’t count Magalhaes in that group. He knows that 10-5 with 1 NC won’t strike fear in the heart of anyone, but luckily, numbers don’t fight in the Octagon on a Saturday night. Fighters do, and this Jiu-Jitsu player has earned the title “fighter,” and he can’t wait to show the world just what he’s picked up over the last three and a half years.

“It’s a tough division, but I see that I can fit around the top, and that’s what I’m going after,” he said. “Igor is going to be my first fight, and I’m really looking forward to it and I’m not looking past Igor, but it’s only my first fight to reach my goal.”