Vince Morales has already gained some valuable experience participating in the unusual circumstances of fight week
By Thomas Gerbasi, on Twitter: @TGerbasi • May. 25, 2020

On paper, the last 10 months were the perfect time for Vince Morales to get used to his new home in Las Vegas. Sure, he was sidelined by the aftermath of nose surgery and then by the COVID-19 pandemic, but there’s plenty he could have done with his girlfriend while waiting for the next call to the Octagon.

On paper. In reality, it seems that as soon as Morales got the greenlight to resume training, he was on the road.

“When this whole pandemic stuff started, me and my girlfriend decided to go back to Idaho until some of this stuff calmed down,” said the Caldwell native. “I had a place to train over there, so I didn't have to slow things down as much and we got to see family, which is always nice.”

Okay, understandable. Then came a call from his cousin, bantamweight standout Ricky Simon.

“Ricky said he got a fight, and I said I'm coming to you so we can train,” Morales continues. “So I came over here to the Portland / Vancouver area and trained with him to wrap up his camp and here we are. I went from Boise to Portland to Florida back to Boise, drove to Vegas, and then I flew back to Portland.”

So no seeing Vegas, then?

“I was there up until February, and I've only been here a few days since.” 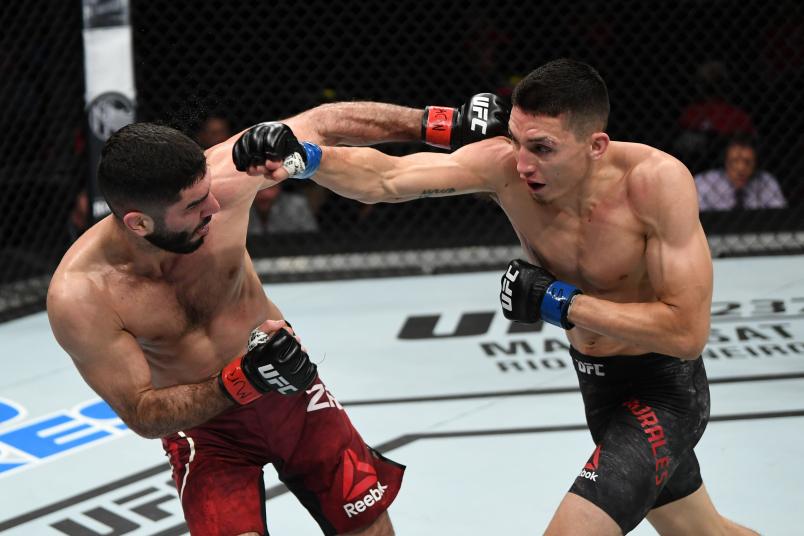 OTTAWA, ON - MAY 04: (R-L) Vince Morales punches Aiemann Zahabi of Canada in their bantamweight bout during the UFC Fight Night event at Canadian Tire Centre on May 4, 2019 in Ottawa, Ontario, Canada. (Photo by Jeff Bottari/Zuffa LLC/Zuffa LLC via Getty Images)

OTTAWA, ON - MAY 04: (R-L) Vince Morales punches Aiemann Zahabi of Canada in their bantamweight bout during the UFC Fight Night event at Canadian Tire Centre on May 4, 2019 in Ottawa, Ontario, Canada. (Photo by Jeff Bottari/Zuffa LLC/Zuffa LLC via Getty I

I bet you’re wondering where the Florida part of the trip came in, but if you looked close enough behind the mask, you could see “Vandetta” with Simon for his May 13 bout against Ray Borg. That’s being a good cousin, but the added benefit is that when Morales gets fight week underway for his May 30 bout against Chris Gutierrez, he will have already experienced the fight life in the midst of a pandemic, COVID-19 tests and all.

“It might give me an edge in terms of comfortability,” he said. “But when it comes down to the fight, a lot of times that could be one of the most uncomfortable things, so it's about who deals with being uncomfortable better. Throughout the week I'll probably be more comfortable just because I've been through that stuff, but I don't want to give that too much credit where I say it will help me a lot for the fight.”

It's an honest assessment from an honest fighter who admits that he’s a little frustrated with the way things have gone in his UFC career thus far. That’s understandable, considering that he’s a lot better than his 1-2 record in the Octagon would tell you.

He put in a solid effort on short notice against top 15 contender Song Yadong in November 2018, then evened his record with a victory over Aiemann Zahabi in May of last year. So far so good, but then came a July bout with Benito Lopez which he lost by unanimous decision. That’s how the line on his won-loss record reads, but according to the poll taken by MMADecisions.com, all 11 media members surveyed believed Morales deserved the nod.

That stings, but the 29-year-old is trying to keep focused on what’s ahead and not what’s in the rearview mirror.

“I think about all that and I go down a rabbit hole of negative thinking,” he said. “So from those fights, I do the same thing, whether I'm winning or losing. I look back at the fight, I try to focus on all the areas that need improvement. That's the only thing I can do to keep me sane and that's what I've been doing.”

He does wonder why the close decisions aren’t going his way, though, and he’s had plenty of time since last summer to think about it.

“I go back and forth on it because I think showmanship means a little something and I'm always egging on my opponent, trying to tell them let's fight, so if it's down to the wire like that, I feel like it should say something for the person who's trying to get the fight going,” Morales said. “Or maybe I'm giving these people too much respect in the beginning of the fight where I'm figuring things out. That's one thing about coming to the UFC and being at the elite level; I used to fight real aggressive and run straight in. And at this level, I have to pick my things a little better so I don't run into something stupid. Most people know how to punch, so let's do things the right way and doing things the right way left me starting off real slow, and if it comes down to one round, it's probably that first round that I'm losing because I'm taking so much time off. But I'm in the process of fixing that as well.”

This Saturday, he gets his chance to prove that the holes in his game have been sewn up, not to mention that it will be nice fighting with his nose at full strength, meaning he can go hard for all three rounds. But even more than that, despite fighting without any fans in attendance, Morales knows he’s got plenty of support behind him, so he wants to give those people something to cheer about while they’re watching at home.

“I've had a lot of people reach out to me after losses, where it's my low point, and they're offering so much support and belief,” he said. “This is from people I don't even know. That stuff means the world to me and I just get more and more motivated. I can't wait to put on a show.”