Vince Morales Knows That The UFC Is Where He Belongs, Now He's Going To Prove It To Everyone Else At UFC Ottawa
By Thomas Gerbasi • May. 3, 2019

Vince Morales is a generally positive sort, so despite losing his UFC debut in November to Yadong Song, he didn’t see it as the end of the world. Instead, it was an opportunity to take the positives, eliminate the negatives and move forward.

“I took away a lot, actually,” said Morales. “For one, I showed that I belong with the competition here. That was a big takeaway for me that actually helped my confidence and I think it opened up a whole new avenue for me training wise. I'm working on new things and I'm working on higher level stuff. I've got a solid foundation; I'm just building the buildings on top of that.”

To sew up those holes in his game, Morales made the trip to Las Vegas and the UFC Performance Institute to work with his team on taking things to the next level for his Saturday bout with Aiemann Zahabi. The Oregon product is in the midst of making a full-time move to the fight capital of the world, and while that might be scary for some, Morales goes back to the words of his father, who told him, “Once you start something, you don't quit.”

Morales has always taken those words to heart, and though it’s easy to live by them when things are going well, when you go 0-12 as a freshman wrestler, like Morales did at Ontario High School, it’s not as easy.

“As far as my ego, it was gone,” he laughs, recalling that rough beginning on the mat. “But I really learned a lot. When I was doing it, I still felt like there was something there and it was just something I could figure out. So by the time I was a senior and became a State champ, it proved what I had thought in the first place, which is anything, as long as you don't quit and you work hard and you're passionate about it, you're gonna be able to come out on top. I try to take that mindset everywhere.”

The losing didn’t end at the end of his freshman year, though.

“I lost more as a sophomore,” Morales laughs. “I didn't win until halfway through sophomore year. And I was like, 'Oh, that's what that's like. I can get used to that.'” 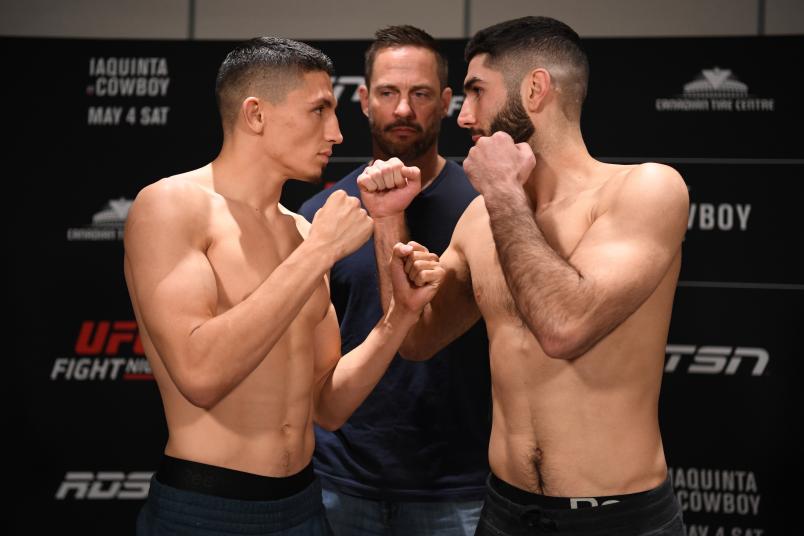 OTTAWA, ON - MAY 03: (L-R) Vince Morales and Aiemann Zahabi of Canada face off during the UFC Fight Night weigh-in at Andaz Ottawa Byward Market on May 3, 2019 in Ottawa, Ontario, Canada. (Photo by Jeff Bottari/Zuffa LLC/Zuffa LLC via Getty Images)

There must have been some reaction in the gym after that first win.

“Regardless of not being the best, I was always at practice, eager to learn, trying to learn and wanting to be better,” he said. “And I think everybody could see that. So anytime I was wrestling, I had a lot of support and a lot of screaming people out there, which I feed off of, so I'm all about it.”

As Morales pointed out, high school ended with an Oregon State championship. That’s some final statement after a rough beginning, and he plans on making the same statement in the UFC, opting to look at Saturday’s bout as a fresh start more than a second chance to make a first impression. 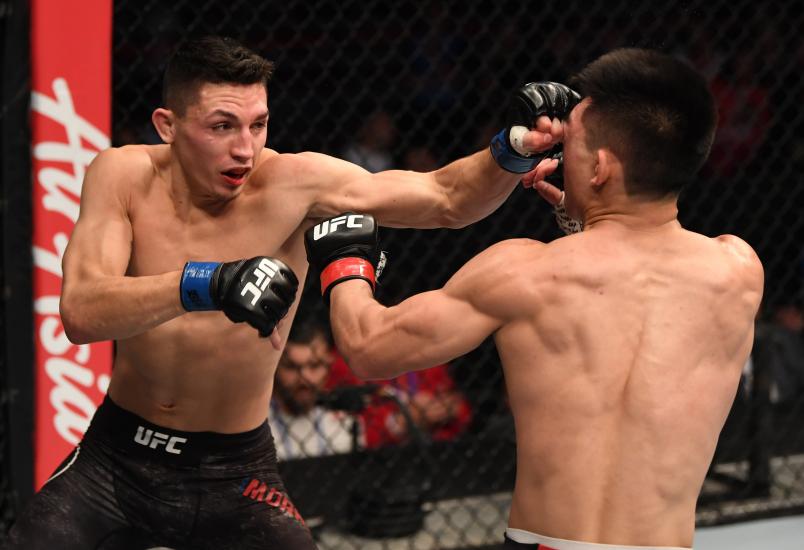 “It's exactly how I feel,” Morales said. “I've got a full camp this time, I'm in a new area, I've got all the guys over here at the PI, which is great because they're dedicated to making me an all-around better athlete and letting me know my body better and get more acquainted with what it means to be a professional athlete. I feel like this is where I'm supposed to be and this is going to go exactly how it needs to go.”

And once in the Octagon, it’s time for Morales to go to work. In Ottawa, the job is to welcome back the highly-touted Zahabi after his first pro loss and an 18-month layoff and put some immediate doubt in his head and keep it there until Morales leaves Canada with his first UFC win.

“From the very moment the fight starts, that's how I want him to feel,” Morales said. “I want him to think, ‘Okay, this guy actually came to fight.’ At this level, if you're not coming to fight, then you're in for a rude awakening. I'm there to fight, we're gonna be in each other's face, and I'm ready to be there all night if we have to.”