UFC Veteran Vinc Pichel Is Driven To Pursue A UFC Title More Than Ever Before Heading Into UFC 273
By Thomas Gerbasi, on Twitter: @TGerbasi • Apr. 7, 2022

If we’re going by past patterns, it’s about time to get excited for Vinc Pichel’s annual appearance in the UFC Octagon.

The 39-year-old, who has only competed once in each of the last three years, laughs, and when asked if after his UFC 273 bout against Mark O. Madsen we might see him again in 2022, he says, “You might. If this fight goes well and goes the way I hope it goes and I knock this guy out clean, yeah, you're gonna get another fight out of me this year.”

It’s the voice of experience talking, and few have experienced more in and out of the Octagon than the Californian who is approaching his ten-year anniversary as a member of the UFC roster this December. It hasn’t been an easy road for Pichel, who has had extended bouts with injuries, but he has learned to deal with it.

“I wouldn't say I'm comfortable with it, but it's something that I've done because it lets me catch up on my life,” he said of the one fight per year pattern as of late. “When I'm training, my house is a s**t show, nothing gets done, and all my focus is training and food and rest. So it gives me time to catch up on stuff, but I also had issues with injuries, so I'm taking better care than I have and I've got a lot better people around me now that are helping me with that kind of stuff.”

“I feel pretty good for being almost 40.”

He should. Now living in Colorado, where he trains with Marc Montoya and the Factory X squad, Pichel has won three straight in the notoriously tough lightweight division, defeating Roosevelt Roberts, Jim Miller and Austin Hubbard in succession. And in his new environment, he’s thriving.

Come on, Pichel, time to commit.

“I'm a very committed person and when I do things, I'm not a half-assed kind of person,” he laughs. “I jump in with both feet, so I'm in here with both feet right now, but that's not to say I'm not gonna jump out of the pool eventually.” 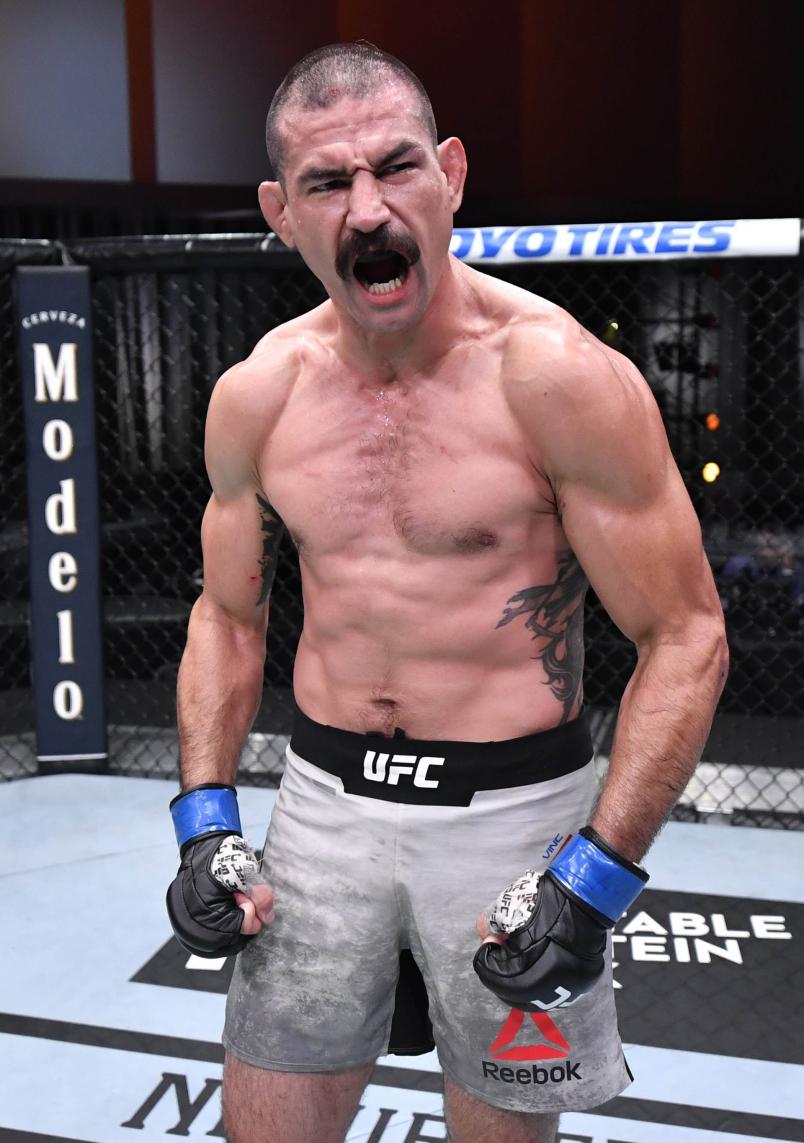 Vinc Pichel reacts after his decision victory over Jim Miller in their lightweight bout during the UFC 252 event at UFC APEX on August 15, 2020 in Las Vegas, Nevada. (Photo by Jeff Bottari/Zuffa LLC)

That “eventually” may be when his fighting career is over or maybe never, given the bonds he’s forged with his coach and teammates, but for now, he’s in the Rocky Mountain State and focused on fighting. So all that “life” stuff, it will have to wait until Sunday morning, even though he does believe striking a balance is key to success in this, or any other, business.

“It's very important,” Pichel said. “I would say having a job is like a having a cup that you're constantly getting filled with water and you can only carry that cup for so long before it gets too heavy and you just can't bear it anymore. So I think having an outside life or a hobby or something that takes you away from your occupation is very crucial and very necessary for your sanity. I've been lucky enough that I'm the kind of person that I'm like, 'F**k it, I don't want to do that, I want to do what I want to do' sometimes and I make myself happy above all else. But this fight right now is a big opportunity for me that I don't want to f**k up again. I feel like I had this opportunity with Gregor Gillespie and I kinda choked there. So I am a little obsessive about this fight and in my training and my thought process but, at the same time, I'm still trying to keep myself on an even keel. And I love fighting, so it's not really a job to me, it's just fun.”

It's even more fun when you win, and Pichel is doing a lot of that lately. He’s on this weekend’s pay-per-view main card against an unbeaten three-time Olympian, so if he keeps his streak alive, he may find himself knocking on the door of the Top 15. After that, well, let’s just say Pichel has watched the journeys of the likes of Glover Teixeira and Randy Couture quite closely.

“For me, I've always had this mentality that it doesn't matter how old you are,” he said. “If you really want something and you want to chase something, you're gonna chase it, regardless of age. Some people are limited sometimes but, for the most part, if you really want something, you'll chase it down. So I have my goal right now, and I never had this goal when I first started fighting; I just wanted to fight because it was fun and I got paid for it instead of arrested. (Laughs) But now my goal is that I want a championship, man. I think I can get up there in those rankings and even get a title shot or even win a championship.

“And I would love, personally, to bring a title home for Marc (Montoya). I would love to be the guy that gave him that world title in the UFC. That's a goal of Marc's that he's shared with us, and it hasn't been a goal of mine until recently, with me moving out here and having this fire lit underneath me with the culture of Factory X. And I still struggle with it sometimes because I feel like I'm still a little out of place because of my demons. But I'm warming up to it, I'm trying to get better, I'm breaking down these walls that I've had before, so I definitely want to bring home this championship. I'd love to do that for Marc and give that to him and let that be my final stamp. Not only was I in there until 40-something years old, but I also won a title in the lightweight division.”