Villante refuses to be boring, will put on a show in Long Island

Throughout their UFC careers, Gian Villante and Chris Weidman have always been in each other’s corner.

While there have been instances where they weren’t literally present, shouting instructions and encouragement from beyond the Octagon fence, they have always been there in spirit and definitely spent the build up to their respective bouts logging time in the gym and helping the other decompress and stay loose in the days leading up to fight night.

Though Weidman arrived on the biggest stage in the sport two years sooner than his fellow Hofstra alum, they’ve spent the last four years and change on the UFC roster together, but the close friends and teammates have never fought on the same card until this Saturday.

Their tandem professional debuts came in Atlantic City, New Jersey on February 20, 2009 at Ring of Combat 23. Weidman earned a first-round submission win in 95 seconds before the doctor stopped Villante’s bout with Randy Durant 35 seconds in due to a nasty cut, handing the light heavyweight newcomer his first career win.

Weidman and Villante weren’t the only future UFC competitors who stepped into Lou Neglia’s cage and picked up victories that evening; fellow east coasters Al Iaquinta, Costas Philippou, Jimmie Rivera and Rafael Natal all fought on the card as well, as did former TUF contestant Jeff Lentz and light heavyweight Ricardo Romero.

Eight years later, the longtime Serra-Longo teammates are poised to do it again this weekend when the Octagon makes its inaugural trip to Long Island for a UFC on FOX event in the duo’s backyard.

“We’ve definitely pushed a hard camp with each other, which is cool, and we’re both kind of peaking at the same time, which I usually don’t see,” said Villante, who faces Patrick Cummins in the second bout of Saturday’s main card. “He’s had times where he’s fighting three weeks after me or two weeks before me, so we’re always peaking at different times, but now we’re peaking at the same time, so it’s cool to see.”

As you would expect, Saturday’s fight with Cummins carries added significance for Villante, as it marks the first time he’s fought at home in his career.

Villante already has a victory in his home state under his belt, having picked up a second-round stoppage win over Saparbek Safarov, who was filling in for Cummins on short notice after the Florida-based fighter was forced to withdraw due to a staph infection, in Albany back in December. This time, however, he’s fighting in his own backyard and the affable 31-year-old has no problem admitting it’s the biggest fight of his career. 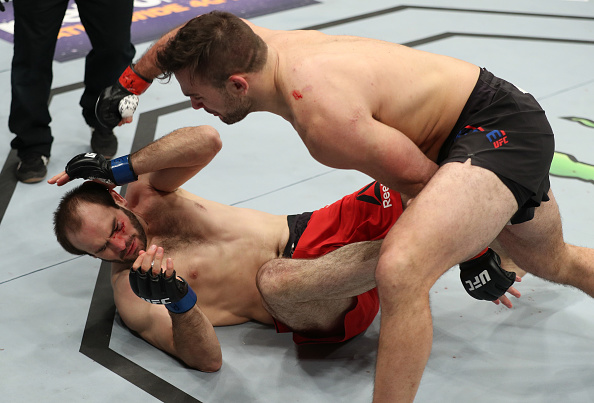 “Every fight in your career, the next fight is the biggest fight of your career, but how much bigger can you get than fighting in your backyard – literally where you grew up and stuff like that? It’s going to be tough to top this one.

“Last fight, I fought Shogun (Rua), a former world champ, so I thought it was going to be tough to top that one, but I think this one tops that one,” said Villante, who went toe-to-toe with the former UFC light heavyweight champion and PRIDE star for two rounds before getting stopped early in the third. “They keep getting bigger and bigger, and sometimes the nerves will build up with that kind of stuff, but I’m starting to accept it and love it and go with it and just go out there swinging.

Learning to cope with those pre-fight jitters has been an ongoing process for Villante, but his time spent with former middleweight champion Weidman and current heavyweight kingpin Stipe Miocic before they make they walk to the Octagon has helped put things in perspective for the charismatic character with an affinity for Bravo’s reality TV lineup.

“The biggest thing is accepting that it’s going to happen no matter who you are,” Villante said. “I’m always with (Chris) before his fights or Stipe, when I’m with him before his fights, I’m with them until the moment they’re walking to the cage, so I know what they’re feeling and they get the same feelings.

Not only does Villante enjoy competing inside the cage, but he also loves putting on a show for the fans and sees it as his responsibility to make things entertaining this weekend when he steps into the Octagon with Cummins.

“I know the guy I’m fighting is going to try to go in there and be boring – he’s going to try to wrestle and lay on me for three rounds. I think that’s his way to victory, but that’s not something I’m gonna let happen.