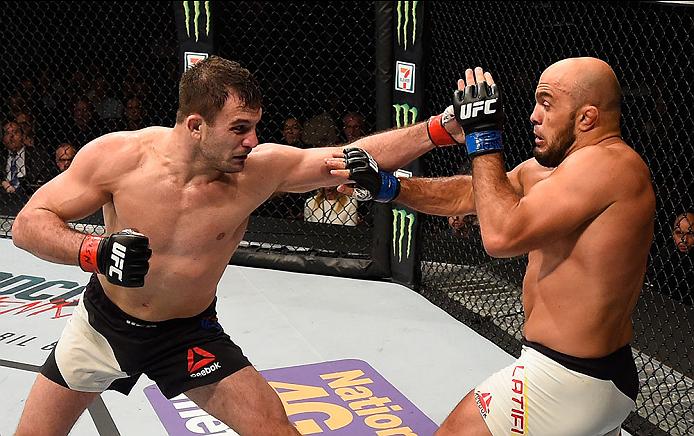 Dressed in nothing but swimming shorts, a snapback and a tie, Villante doesn’t even try to look intimidating. Next to him stands a gentleman in similarly classy attire, sunglasses in place, beer in hand, who is identified in the description as Villante’s Middle School teacher and High School Principal, celebrating his recent retirement with an old student who now happens to be an elite UFC fighter, who explains in the comments: “With you as a teacher people might get why I am the way I am.”

This was some of my guidance growing up @paticus22 . He was my middle school teacher and HS principal. The old man retired, congrats dude! With you as a teacher people might get why I am the way I am.
A post shared by Gian Villante (@gpvillante) on Aug 22, 2018 at 3:58pm PDT

That way is nothing to be apologetic about, though, because while many UFC fans might know the Long Islander as a spirited jokester that can trade verbal blows with the best of them, he’s also a serious fighter that made his old teacher become a fan of a sport he had nothing to do with before.

“Hopefully, he reads this,” Villante said with his trademark laugh when asked by UFC.com about the relationship with the teacher, who he explains is “very, very upset” right now because he couldn’t make it to Moncton. Chances are that if you didn’t know Villante was fighting Ed Herman this weekend on the main card of UFC Fight Night: Volkan vs Smith, you would assume he’s just a regular tourist ready to have some fun in the Maritimes.

The fun, though, is reserved for his teacher watching him do his thing from a safe distance.

“He says he doesn’t really like to watch me fight because part of my style is to get hit a lot,” Villante laughed. “That’s a small part of my plan there, beating up the guy’s hands a bit.”

While that might not be the best strategy generally, his upcoming bout promises to require its use a lot. Placed opposite Ed Herman, Villante knows that it will likely take the kitchen sink and more to dismiss the vet, who has been with the UFC for twelve years and 20 fights.

“I’m open just to go in there and be able to trade with the guy and have a hard fight, looking to land the harder shots,” Villante said. “Herman is a tough dude, he’s been around for a while. Durable guy, so it’s going to be a tough fight no matter what. The guy kept his job with the UFC for more than ten years, so he’s a special dude. I’m expecting a tough fight.”

And that’s fine with him, because tough fights are what Villante encountered every time he’s been in the Octagon so far, where he has battled the likes of Ovince Saint Preux, Ilir Latifi, Patrick Cummins and “Shogun” Rua. 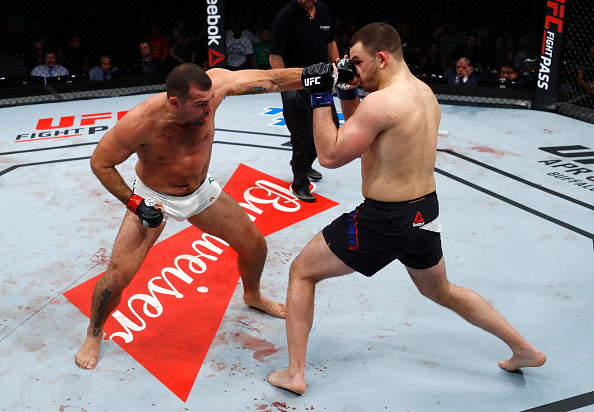 Mauricio Rua of Brazil punches Gian Villante in their light heavyweight bout during the UFC Fight Night event at CFO - Centro de Formaco Olimpica on March 11, 2017 in Fortaleza, Brazil. (Photo by Buda Mendes/Zuffa LLC/Zuffa LLC via Getty Images)" align="center"" />The fight against the Brazilian legend in particular, even though it resulted in a knockout loss, remains one of the fondest of many memories he has made in the Octagon, and that only goes to show who the 33-year-old is.

“One of my favorite fights is the ‘Shogun’ fight, which I ended up losing, but it was a fun fight; we were going back and forth against a guy that’s willing to trade with you and have a good war.”

It’s not that Villante isn’t capable of fighting smart and hunting for points instead of chins. It’s just that he feels like guys like that should leave him alone and make space for the dudes that are down to get tough and dirty with him instead.

“I’m a pretty good wrestler, State Champion and all that stuff, I just don’t think it’s fun to go in there and wrestle dudes,” he said, now fully serious. “I want to knock people out.”

He couldn’t even change that approach if he wanted to, right?

“Yeah, probably not. I mean, it sucks moneywise because you only make half the money (if you end up losing), but I do like those strong, good knockout brawls and back-and-forth fights.”

And back comes the grin.

“I considered (changing my style), but it’s just not who I am. You’ve got to stay real to who you are or you’re not going to have fun, and I have fun when I try to put someone to sleep.”

For Villante, who has gone to a split decision in his last three fights and lost two of them, both in New York, changing the scenery of his fight from his home state to Canada is enough of a change to avoid suffering the same fate again in case the other guy doesn’t go to sleep.

And while this next fight in Moncton does look like the kind of fight that might not require the judge’s verdict anyways, it’s better safe than sorry for Villante in this case, who gladly missed out on fighting at Madison Square Garden a week later for this reason, but not this reason alone.

Good friends with Chris Weidman since tenth grade, a win in Moncton for the team and another one at MSG, where the former champion will take on “Jacare” Souza a week later, seems like a proper setup for a wild victory party.

“I’ll be celebrating all week with me being able to eat in front of him,” Villante laughed. “But yeah, I mean, we only take it one step at a time, go get that win and then we’ll definitely have a good night after, that’s for sure.”

I get so creeped out at these dudes. They have the creepiest laughs and say some really weird shit. Check it out @nycblive @bloodmanorli
A post shared by Gian Villante (@gpvillante) on Oct 9, 2018 at 4:52pm PDT

And because tough fights can’t be part of one’s lifestyle forever, Villante is already planning for life beyond the cage.

“I’ll get really fat,” he laughed, but he also thinks about becoming a teacher, a job he went to school for.

So, don’t be surprised if you see the very same Gian Villante you’re going to see swinging on Saturday night on FOX Sports 1 again years from now, tagged on whatever social media channel will be the norm by then, dressed only in swimming shorts and tie, beer in hand, getting props by one of his students for supporting him all the way up to becoming one of the best at what he does.

Because, through all the jokes and all the fun, being just that is the real reason Gian Villante has been shipping up to Moncton this week.