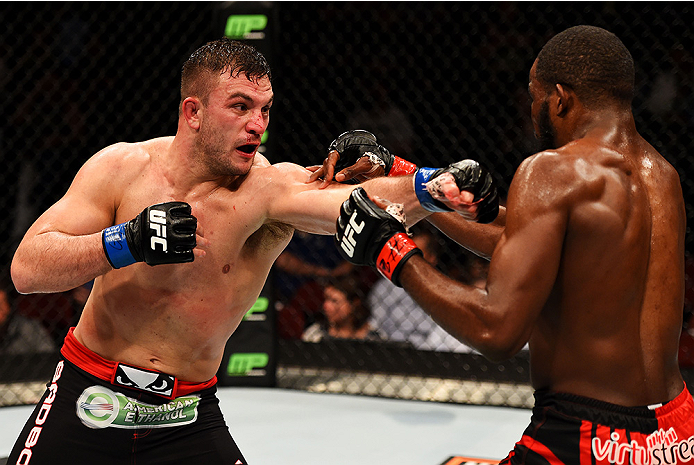 Long Island New York’s Gian Villante is looking forward to going “Down Under” to take on Australia’s own Anthony Perosh at Etihad Stadium on the UFC 193: Rousey vs Holm card this weekend in Melbourne, Australia.

The stadium is expected to attract 70,000 fans but Villante is confident they will be cheering for him instead of their fellow countryman.

“I’m blessed to be involved and I can’t wait for the crowd because you know how Aussies are with their sports; they’re a vocal crowd and it’s going to be nuts,” he said. “Even though I’m fighting an Australian I feel like I’m going to have the crowd on my side. They said it’s going to break every record. To have that many eyes on just two guys fighting, that’s an incredible thing to be a part of.”

In Perosh, the Bellmore Kickboxing product faces a man who is known for his toughness. The wily veteran has been in several wars since the UFC has held shows in Oz, and he is no stranger to the bright lights of big events.

“He’s definitely a tough guy,” Villante says. “He can take a beating. I saw what my boy Ryan Bader did to him and he is as resilient as they come, but rest assured I am going to be the one dishing out the beating, and I fully intend on finishing him.”

A former football prospect, Villante attended Hofstra on a full scholarship and pursued a career in the NFL before picking up mixed martial arts. As a professional, he was the Ring of Combat promotion’s heavyweight and light heavyweight champion, and he trains with current UFC middleweight champion and best friend Chris Weidman.

“Chris and I got in a lot of fun situations when we were coming up, that’s for sure,” he says, adding that the champion now has a personal assistant, a fact that he uses to mercilessly bust his chops with.

“I’ve been brutal on him,” he said. “I think the guy dresses him in the morning too, because Chris is all of a sudden a sharp dresser. It has to be the assistant. He’s all Hollywood now, but yeah, when we were younger we would go out and I would always start a fight. It was always my fault but Chris was the one to finish it. He’s got a shorter fuse than I do. He gets riled up pretty quick but we would embarrass dudes all the time. I hope they don’t search for us now because they would be like, ‘oh wow those dudes are UFC fighters now.”

It’s hard to imagine anyone standing up to a younger Weidman and Villante, who said he was 265 pounds when he first started training mixed martial arts. “265 with abs,” he says, laughing.

“I was a big boy but I still possess that kind of power for my division. I have that one hitter quitter in me, one punch knockout power and I fully intend on putting Perosh to sleep. I train with some big guys and even though Weidman fights at middleweight, people don’t know how big that guy is. I train with the champ every day so Anthony Perosh is in for a long night that’s for sure. It will be a quick, long night.”

Villante entered the UFC when the promotion bought out rival Strikeforce in 2013, and while he is a fan favorite, he’s had mixed results in some of his bigger fights, most recently dropping a bout to  “Filthy” Tom Lawlor while moving in for the kill.

“It was a good punch. It happens,” he said of the vicious right counter that sent Villante to the canvas for only the second KO loss of his career. “I’m hungry after that fight. It was a good lesson. You have to learn from your mistakes. But that doesn’t mean I’m going to be timid.”

At 30 years old, Villante is much younger than the 43-year-old Perosh, but he doesn’t think age will be a factor for his opponent.

“From everything I’ve seen about Perosh, he always comes in shape and is game,” he said. “It is going to be an awesome fight and an awesome night of fights for the fans.”