Villante Anticipating a Battle in Brazil

"He likes to bang it out and go in there and put on a show. I think that is something I definitely want to do and I’m going to bring it in this fight." - Gian Villante 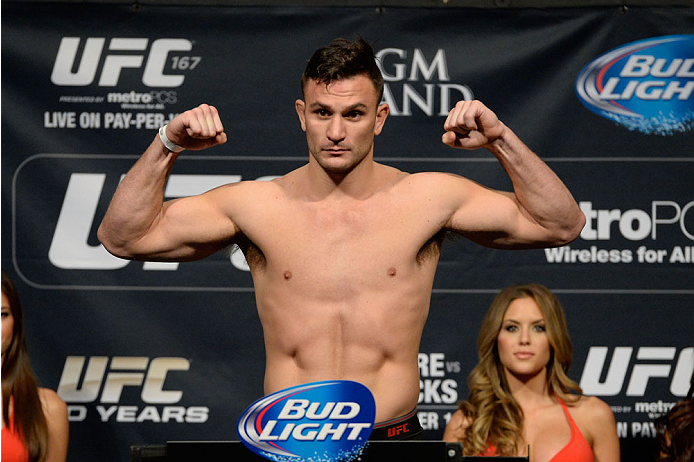 In the realm of athletics momentum is a tricky thing.

In some sports it can be something such as putting a few positive steps together, the crowd’s energy turning the tide, or a big stop in a moment where a stand needed to be made. Although mixed martial arts is the type of hands-on playing field where an athlete is directly in control of their ability to swing the balance, many fighters were made familiar with the phenomenon in their earlier days of competing in other avenues.

For rising light heavyweight Gian Villante, the football field of Hofstra University is where he first became familiar with how much of an impact he can have when things go live. The New York native found his scrap as a linebacker for the Pride and discovered the measure of the will he could impose on another human being. Villante also invested time away from the gridiron on the wrestling mats, and when his collegiate career came to an end, the Bellmore-based fighter decided to put all those skills to use in MMA. And the immediate results were impressive.

The 28-year-old notched victories in seven of his first eight showings and the strength of that roll earned him an invite from the next level of competition. Nevertheless, being a professional athlete requires adjustments to made, and losses in his first two showings under the now defunct Strikeforce banner put his back against the wall. Villante had certainly proven he was too talented to keep fighting on the regional promotion circuit, but his road ahead in the big leagues was uncertain.

With those doubts hovering overheard, the former NFL prospect dug in and went all in on his goal of establishing himself as a legitimate light heavyweight threat. And this is where momentum came back into play.

Not only was Villante able to rack up victories in his next three outings, but the surging success of his friend and future middleweight champion Chris Weidman provided added motivation. The two fighters have been training partners from the start of their respective careers and their relationship has been an essential part of their journey through MMA.

“It’s definitely motivation,” Villante said. “We started at the same time and have been training together since Day One. As much as it is motivating, it’s also great to have someone to lean on through the troubled times and things like that. We’ve both been through injuries and it’s been good to have him there through some losses. It’s definitely a benefit and it will be good to have him there for this fight. I’ll hopefully get another win and keep things rolling.

“We do some stupid stuff sometimes,” Villante laughed when asked about a recent picture of the two fighters shirtless with suspenders that hit Instagram. “We’ve had a good camp and we always keep each other laughing. That’s the best part of being such good friends with someone you train with because we know what we go through every day and how hard it is to do this job and the pressures that come with it. But if you can have some fun while you are working, why not? That’s something we are able to do and we always make sure to have fun with it. But we’ve done some stupid things in the past for sure.”

When the San Jose promotion closed its doors in early 2012, Villante joined Weidman as he crossed over to compete on the biggest stage of all in the UFC.

While his debut performance inside the Octagon ended in strange fashion as he suffered a technical majority decision loss as the result of an accidental eye poke, Villante was bound and determined to bounce back strong. He was eager to get back into the win column and have his hand raised for the first time under the UFC banner, and when an opportunity to step up on short notice to face Cody Donovan at UFC 167 arose, he jumped all over it.

Villante dominated the action and made quick work of the Colorado native as he picked up a first round knockout finish in Las Vegas.

“I wasn’t very happy with that fight to be honest,” Villante said. “I cut a lot of weight in a short amount of time because it was short notice. Was I happy with my performance? Not really, but I was happy to get the win. I’m fortunate things worked out for me in the end, but I am going to put on a much better show this next time out.”

The victory over Donovan reinvigorated the Long Island native, and he has every intention of keeping the positivity rolling in his next outing when he squares off with hard-nosed brawler Fabio Maldonado on March 23 in Brazil.

The former boxer has built a storied reputation for being impossible to break, as he’s engaged a consistent series of knock down, drag out affairs. With the fighting style and level of excitement Maldonado brings to his fights, Villante is excited for the opportunity to scrap it out with the Team Nogueira fighter.

“I think it’s an exciting fight and a great opportunity to showcase some of my skills. He likes to bang it out and go in there and put on a show. I think that is something I definitely want to do and I’m going to bring it in this fight. It’s a very important fight for me and will be my third in the UFC. My first fight inside the Octagon was a little messed up with the way it went and the injury and all. I took the loss because of the injury but came back strong with a win in my next fight. It felt good to get the win and I need to get back on a roll again and start picking up some momentum.

While Villante has prepared for the likelihood of his bout with Maldonado being a barn burner, he’s also taken notice of how difficult the Brazilian has been to put away. Maldonado has shown the ability to absorb large amounts of punishment while remaining dangerous as the fight carries into the later rounds.

Maldonado has the ability to go into a zombie-like mode when trudging through deep waters, but that gear is something Villante is prepared for. He’s a big fan of AMC’s smash hit The Walking Dead, and he is ready to play the role if it comes to it.

“The Walking Dead is one of my favorite shows and I’ll go Daryl Dixon on him if I have to.”