Originally headlined by a welterweight title clash between Jason Jackson and Maki Pitolo, that pairing was put on ice when a last minute medical issue put the champion Jackson on the sidelines. Instead, Pitolo will now take on Kassius “Kayne” Holdorf in a bout that will cement the winner as the top contender in the 170-pound ranks.

Here’s a look at the matchups and emerging talents to keep an eye on Saturday at VFC 52.

After dropping two of his first three pro fights, Pitolo enters Saturday’s main event on a six-fight winning streak, with the last two victories coming inside the VFC cage. Following a second-round stoppage win over TUF alum Andrews Nakahara in April, Pitolo returned in late May to score a 48-second finish of Justin Guthrie.

Shifting from facing the resurgent Yuri Villefort to challenging Pitolo, Holdorf looks to maintain his perfect record under the Victory Fighting Championship banner. Don’t let the three submission finishes on his record fool you – “Kayne” is a power hitter through and through, as all eight of his victories have ended due to strikes of some kind.

While it gets used far too often in MMA, this is one of those scraps where “Don’t Blink” is a sound recommendation. 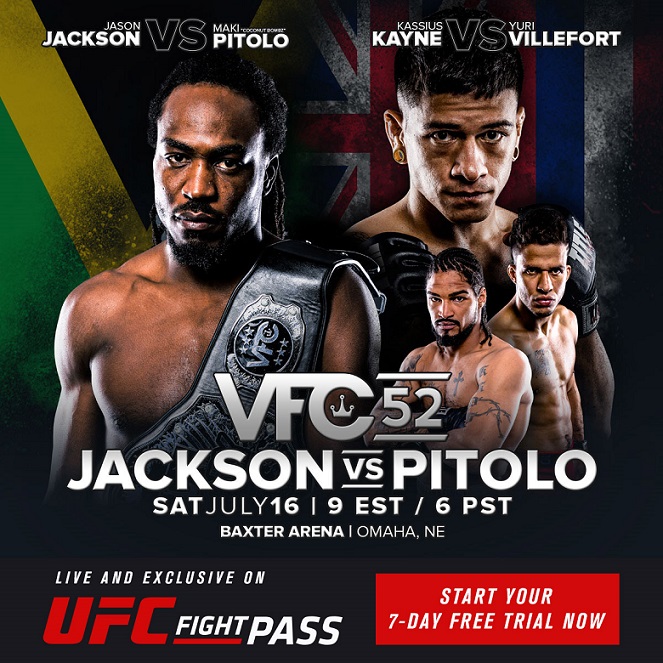 Elevated into the co-main event position on the fight card due to the shuffling at the top of the lineup, this is another solid welterweight clash that should help establish the hierarchy in the highly competitive division.

Even though he just turned 30, Cochrane has been a fixture on the regional circuit for some time and stands as a litmus test for any up-and-comer looking to establish themselves. Following a rough patch where he lost four of five, Cochrane has bounced back to win six of his last seven, including a five-round split decision victory in May.

Witt enters on a four-fight winning streak that includes a one-minute finish of tough Canadian Ryan Dickson and a third-round DQ nod over UFC alum Isaac Vallie-Flagg last time out. The 29-year-old has been on the radar as a prospect for a couple years now, and if he’s going to take the next step forward, beating a vet like Cochrane is a great opportunity to do so.

Dawson stormed out of the gates to start his professional career, following up a 5-0 amateur run with nine straight victories in 21 months. That run of success came to an abrupt stop at the end of April, however, as the 22-year-old Nebraska native was stopped in 35 seconds. Wasting little time getting back in the cage, Dawson is hoping to regain some momentum and get things moving in the right direction again in this one.

In order to do so, he’ll have to get through Camp, who has accrued 10 appearances in less than two years and has been showing signs of development as of late. After earning just a solitary win through his first six appearances, Camp has won three of his last four, capped by a second-round submission win over Tony Ortega at VFC 49 in April.

Don’t let the records fool you: this is a quality tilt between two young hopefuls looking to establish themselves as contenders in the featherweight division.

If you’re currently wondering which emerging fighter’s bandwagon you should get onboard, Stots would be a pretty good choice.

Unbeaten through his first five professional bouts, the Roufusport product has a solid wrestling background, trains with an elite collection of coaches and fighters and is coming off one of the best knockouts on the regional circuit this year.
WATCH: Stots KO over William Joplin at Victory FC 49

The promising prospect gets a step up in competition here, taking on the seasoned DuBray, who has been a pro since 2009 and has shared the cage with VFC staples Sean Wilson and Alonzo Martinez, as well as TUF 18 alum Anthony “Sharkbait” Gutierrez. With another strong showing here, the talented up-and-comer would move closer to earning a call-up to the major leagues.