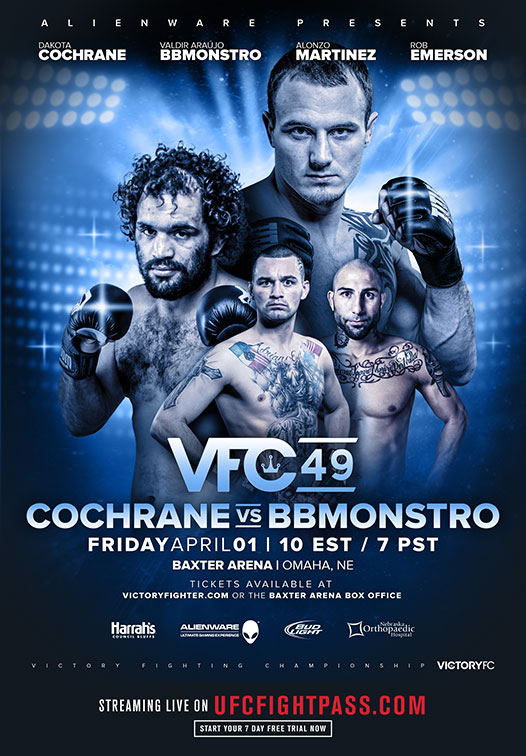 Friday night at the Baxter Arena on the University of Nebraska-Omaha campus, Victory Fighting Championship delivers a seven-fight card headlined by a pair of former Ultimate Fighter hopefuls that is available exclusively on UFC FIGHT PASS.

Here’s a look at what’s on tap.

Part of the squad representing The Blackzilians on Season 21 of the long-running reality TV competition, the 31-year-old Araujo picked up a victory over American Top Team’s Steve Carl early in the competition before dropping a unanimous decision to veteran Nathan Coy down the stretch. He’s competed twice since the show wrapped, losing to Alex Morono before rebounding with a first-round submission win over Victor Moreno to close out last year.

Cochrane was a surging regional competitor fresh of a dominant win over Jamie Varner when he entered the elimination stage of filming on Season 15 of The Ultimate Fighter, but his quest to get into the house came up short as he was submitted by unbeaten lightweight James Vick. It’s been an up-and-down run for Cochrane since then, but the Omaha native has collected five straight victories, including a January submission win over former UFC fighter Jake Lindsey at VFC 47.

Another member of the TUF 21 Blackzilians team, Nakahara will step into the cage for his first professional fight in two-and-a-half years opposite Pitolo, a surging Hawaiian welterweight with four consecutive wins, the last three of which have been stoppages.

Nakahara, who made his MMA debut in April 2008 with a submission loss to legend Kazushi Sakuraba, is a decorated karateka and Brazilian Jiu-Jitsu purple belt, but he’s failed to translate those skills into any major success inside the cage. A former football player who started kickboxing as a means to stay in shape and improve his cardio, Pitolo went 13-2 as an amateur and now looks to add a recognizable name to his roll call of dispatched foes. 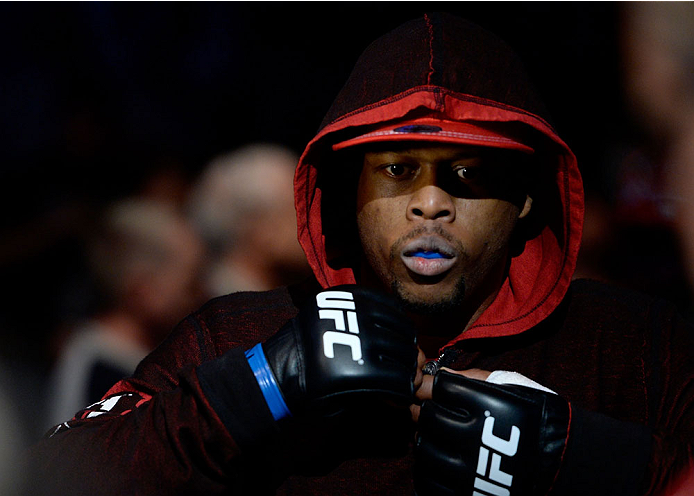 After four straight wins to start his career earned Houston a call to the Octagon, the 28-year-old returns to fight in his hometown looking to halt a five-fight losing streak. His run of poor results started with a quick loss to rising UFC middleweight contender Derek Brunson at the third UFC Fight for the Troops event at Fort Campbell, and extended to five with a split decision loss to Matt Jones in September.

Cleveland is trending in the other direction. Following a five-fight stretch that saw him go 1-3-1 with losses to Bubba Bush and Steve Montgomery, the former heavyweight prospect-turned-middleweight wild card has racked up three straight victories. Most recently, Cleveland picked up a win at VFC 48 in February, stopping Jaquis Williams.

You have to do some digging to find the goods on Alford, but the South Dakota-based fighter is coming off a six-second knockout win over two-time Octagon entrant Chad Reiner at the end of February.

Kayne, on the other hand, enters off a unanimous decision loss to Reese Hernandez, but is looking to maintain his perfect record inside the Victory FC cage. The Nebraska native has collected five of his seven career wins under the VFC banner and is hoping some home cooking and familiar surroundings help him get back into the win column.

Somewhere along the line, every emerging prospect gets thrown into the cage with a regional vet as a litmus test – a bout designed to see if said prospect is the real deal or simply a guy that has been getting the better of weak competition.

That’s exactly what this matchup is for Stots, the 4-0 bantamweight prospect representing the Roufusport team. After getting the better of neophyte Demetrius Wilson last time out, Stots now shares the cage with the 25-fight veteran Joplin, who has rebounded from a rugged start to his career to go 10-3 over his last 13 fights.

Is Stots a future VFC contender and a prospect fight fans should be keeping tabs on, or will the savvier, more experienced Joplin show that he’s still a little green? 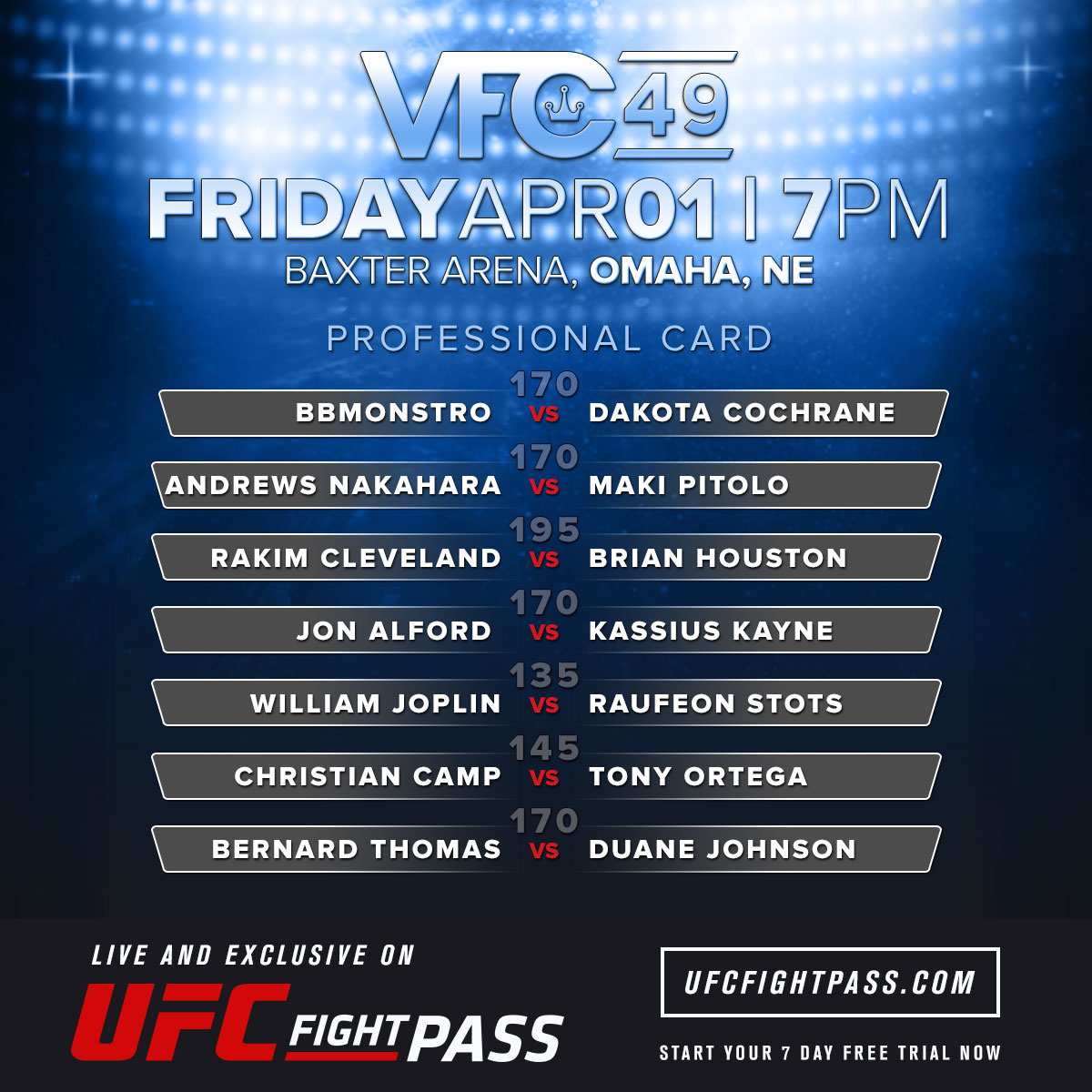 Youngsters looking to build some momentum square off in this one, as the 24-year-old Camp takes on the 22-year-old Ortega in a bantamweight tussle. This will be the 10th fight of Camp’s career and the third time he’s tried to pick up consecutive victories, while Ortega is looking to rebound from a first-round submission loss in October.

Johnson makes his pro debut after amassing a seven-fight winning streak to close out his time in the amateur ranks. The 27-year-old, who split his wins evenly across finishes and decisions, steps in with the 3-0 Thomas, who has earned finishes in each of his first three pro appearances.

This one should get the night started with a bang and the winner will be one to watch in the Victory FC ranks going forward.