Three weeks ago in Omaha, Nebraska, Anthony “Lionheart” Smith avenged a prior defeat at the hands of Josh Neer with a first-round stoppage win over the Midwest veteran that translated into a short-notice opportunity to return to the UFC this weekend in Pittsburgh.

Before Smith and the others competing in “The Steel City” hit the Octagon, another crop of hopefuls looking to follow in his footsteps cross the threshold into the Victory FC cage at Buccaneer Arena in Des Moines, Iowa for VFC 48: Jackson vs. Moreno.

Here’s a look at the seven-fight lineup set to air on UFC FIGHT PASS on Friday night. 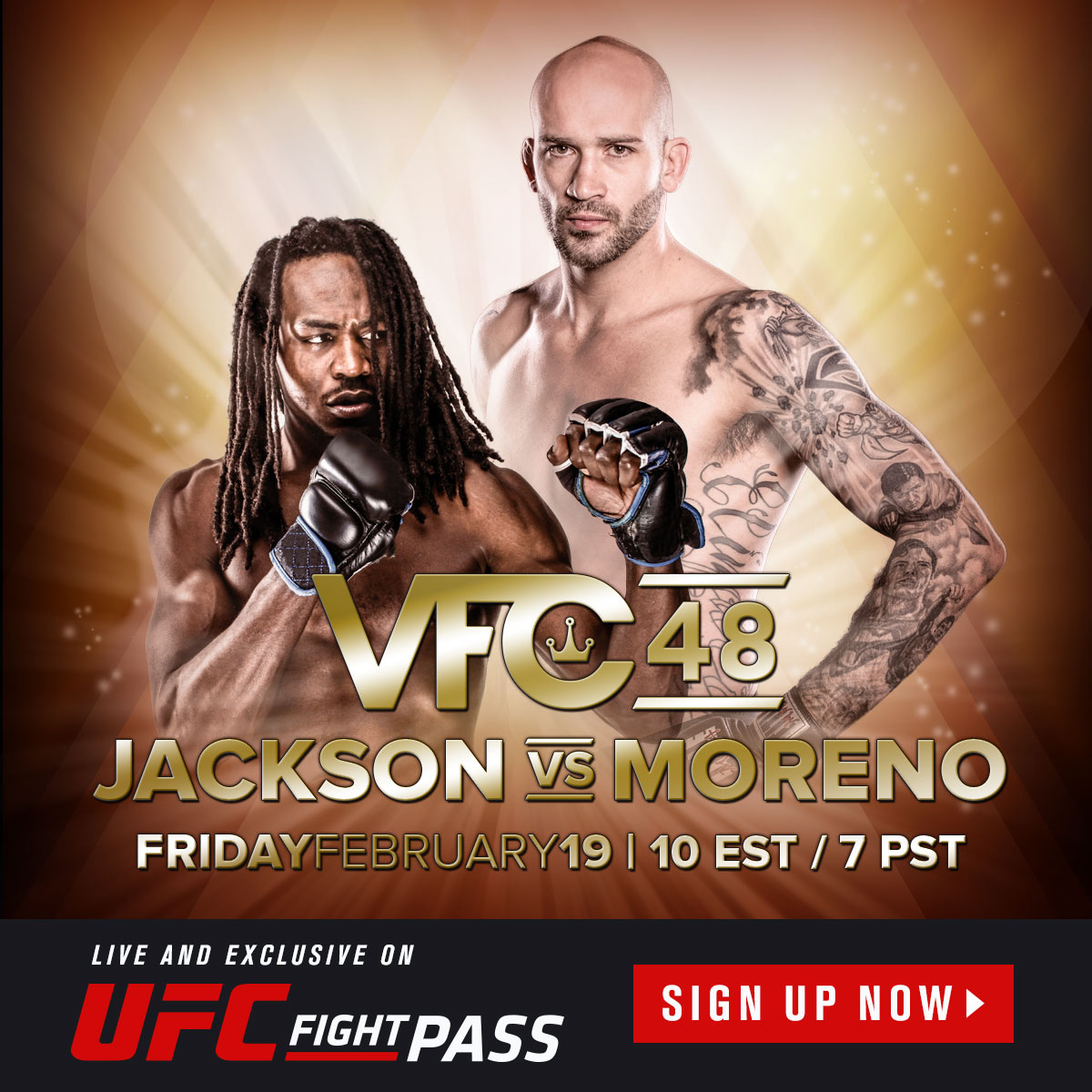 The VFC 48 main event is a welterweight contest pitting an emerging talent still getting his feet wet as a mixed martial artist squaring off against a seasoned vet that has seen it all and will be stepping into the cage for the 60th time in his pro career.

Jackson was a member of the Blackzilians team on Season 21 of The Ultimate Fighter, picking up a victory over American Top Team veteran Marcelo Alfaya before losing to Michael Graves in the penultimate bout on the show. The 25-year-old has collected four wins in six pro appearances (three stoppages) and his only two setbacks have come against ATT products that have worked their way to the UFC – TUF 21 finalist Hayder Hassan and Colby Covington.

Moreno is a hometown favorite whose five-fight winning streak was snapped back in November by another member of the TUF 21 cast, Jackson’s teammate, Valdir Araujo. With 30 stoppages to his credit (and another 21 counting against him), the 32-year-old Moreno has become a popular figure on the Midwest fight scene for his “kill or be killed” approach in the cage and it should be no different when he steps in opposite Jackson on Friday evening.

Friday’s penultimate bout is a middleweight clash between a pair of promising young talents.

Representing the Roufusport team, Olson looks to rebound from the first loss of his professional career, which came last April under the RFA banner against one of the top middleweight prospects in the sport, Khalil Rountree. Prior to that setback, “Captain Crunch” had picked up back-to-back submission victories after his pro debut ended in a No Contest just 90 seconds in.

Across the cage, Young is an unbeaten 21-year-old who has ended all four of his professional appearances by submission prior to reaching the four-minute mark of the opening round. He made his Victory FC debut back in July, needing just 81 seconds to tap Cody Sherwood and followed that up by getting his hand raised again exactly four months later to push his winning streak to four.

This should be his toughest test to date and the winner of this one will establish themselves as one of the top prospects in the VFC middleweight division.

The team at SuckerPunch Entertainment has a knack for identifying and representing young talent and they might have found another diamond in the rough in the 21-year-old featherweight Kirk. A pro for just over a year, “The Jawaiian” steps into the cage on a two-fight winning streak (both stoppages) and with his lone setback being a split decision loss.

In Baccam, he’ll face a tough regional staple who has emerged from a rough patch that saw him go 1-3 to pick up consecutive victories heading into this one. While this feels like a showcase opportunity for Kirk, it’s also the type of scrap where young fighters on the come up have been known to struggle.

We’ll see if that’s the case on Friday night. 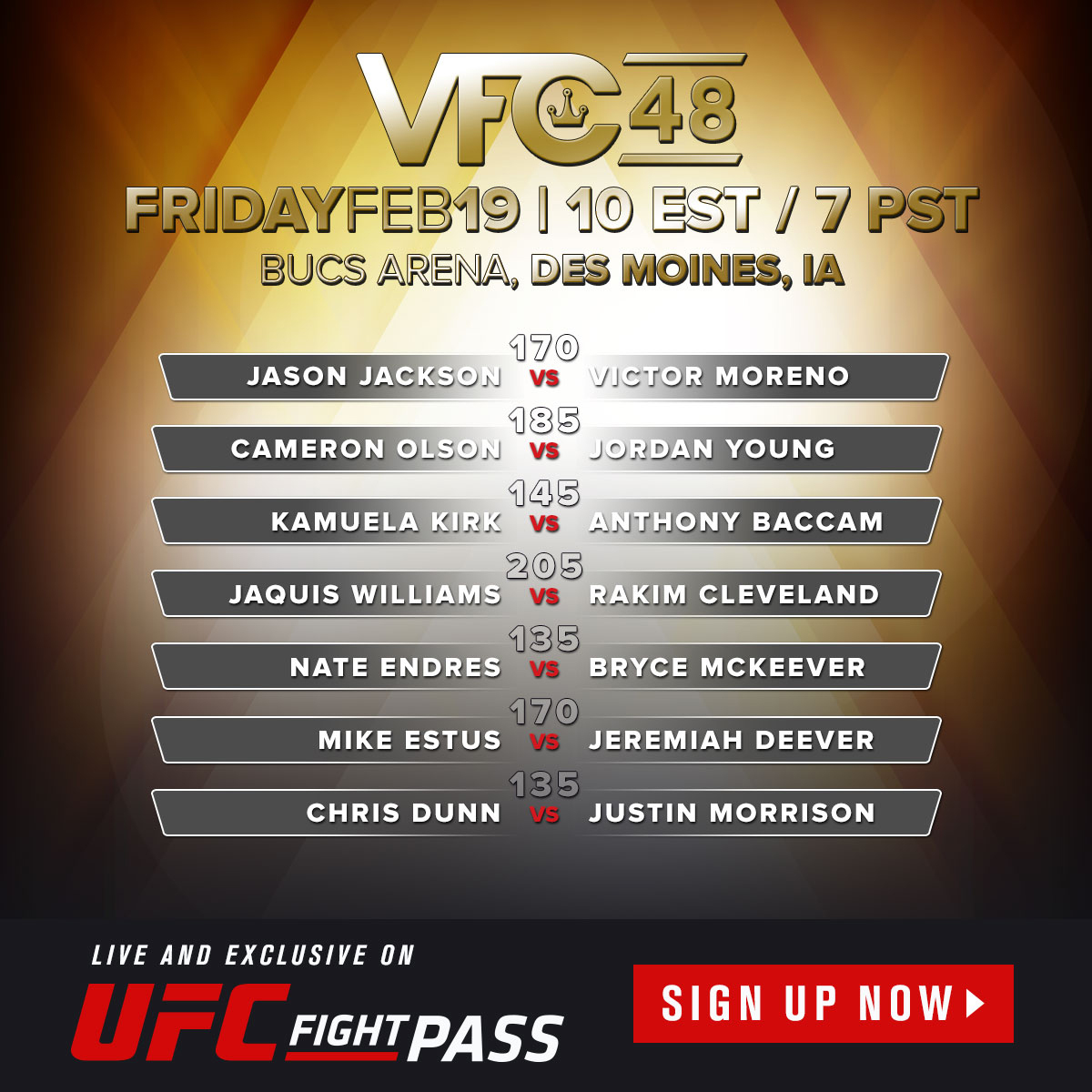 After beginning his career with four consecutive victories, Williams has alternated setbacks and successes over his last five outings, most recently getting tapped by co-main event competitor Jordan Young in November.

Cleveland started competing as a heavyweight, losing to surging UFC knockout artist Derrick Lewis in his pro debut (and again three fights later) before moving down in weight. The 27-year-old has been consistently inconsistent throughout his career, chasing rough stretches with hot streaks before going 1-3-1 over 13 months and then winning two straight heading into this one.

How this one plays out is anybody’s guess, but with just eight trips to the scorecards between them, chances are someone is getting finished.

Someone’s “O” has got to go, only this time, we’re not talking about unbeaten fighters.

Endres and McKeever each made their professional debuts under the Midwest Cage Championship umbrella and walked away having experienced defeat, each man getting tapped in the opening round.

They both went undefeated in a smattering of amateur bouts, so now that they’ve gotten their first time fighting as pros out of the way, hopefully things will go a little more smoothly the second time around.

Looking at their respective resumes, this one should profile as a battle of submissions, as Estus has finished all seven of his victories to date on the mat, while Deever has done the same in his four appearances. Ironically, four of their five combined losses have come by way of submission as well, so if you can find a buddy willing to take bets on how this fight ends, laying a couple shekels down on “by submission” might not be a bad idea.

Of course, these types of matchups where fighters with the same strengths square off often tend to play out against expectations so, on second thought, save your pennies and simply take in the action.

The night kicks off with one of those scraps that you’ll find on just about every regional fight card around the country – a pairing between a relative neophyte and a veteran that carries a near .500 record after being through some battles.

Dunn kicked off his career with a decision win back in August, while Morrison had a three-fight winning streak that stretched back to June 2013 snapped last time out by UFC alumnus Tim Gorman.

Remember that coin you saved by not betting on the last fight? Pull it out of your pocket, assign heads and tails, give it a flip and see how you do.