Vick: I believe that I'm mentally stronger than all these guys

On Saturday August 25th James Vick will be making his UFC main event debut against fellow top ten lightweight Justin Gaethje. Winner of his four of his last five and nine of his last ten, Vick is ready for the UFC Fight Night Lincoln spotlight.
We caught up with “The Texecutioner” to discuss getting recognition, how he has evolved as a fighter, his mentality, what makes him so dangerous, being a father and how he thinks he’s going to get the win on Saturday.
UFC: Fight week is finally here, how are you feeling?
Vick: I feel good. I feel ready for this moment.
UFC: This is you first main event, what’s it going to take for you to start getting that big name recognition?
Vick: Once I win this fight I think there is nothing but big fights ahead of me after this. I think I just need to go out there win this fight you know, get this knockout and then go on to bigger things.
UFC: What have you learned about yourself during your UFC tenure and how have you grown as a fighter?
Vick: A lot of the things I’ve learned from the training aspect is to be smarter. Not get injured as much. Learn how to be healthy and make smarter decisions. Work smarter not harder and stuff like that. That’s really the last couple of years that’s been able to shine for me because I’ve had a lot of fights, frequently, the last two and a half years since I had all those surgeries and stuff.
UFC: What is your mindset and mentality when going into camp and into fight night?

"This is my number one focus and I believe that I mentally stronger than all these guys. I really believe that in my mind & my heart that it’s my destiny to become a world champion." - @JamesVickMMA feeling confident heading into his #UFCLincoln main event vs. Justin Gaethje. pic.twitter.com/kfo2zdb3cj
— UFC News (@UFCNews) August 22, 2018

Vick: This is my number one focus and I believe that I mentally stronger than all these guys. I really believe that in my mind and my heart that it’s my destiny to become a world champion. If it wasn’t then God wouldn’t have put it in my heart so strongly.
UFC: What makes you such a dangerous fighter?
Vick: I’m dangerous as a fighter because I’m well-rounded. I can do everything. I can box. I can wrestle. My jiu jitsu is really good. My kicks are good; flying knees...I have so many weapons.
UFC: How’s being a father? Has it changed your perspective on fighting?
Vick: It’s great, having a son has been amazing. James Jr. is his name. He’s great. It hasn’t really changed my perspective on fighting. I know they say it gives you more motivation and stuff, but I’m always motivated to be a champion. That’s my goal regardless. Financially, it’s definitely motivation. Hey, I’m going to make my life easier to raise this kid. It’s a blessing. I love it. It really hasn’t cause any extra stress for me or anything like that my girls done a really good job of taking care of him while I’ve been away at camp for a while and stuff like that. This is great. 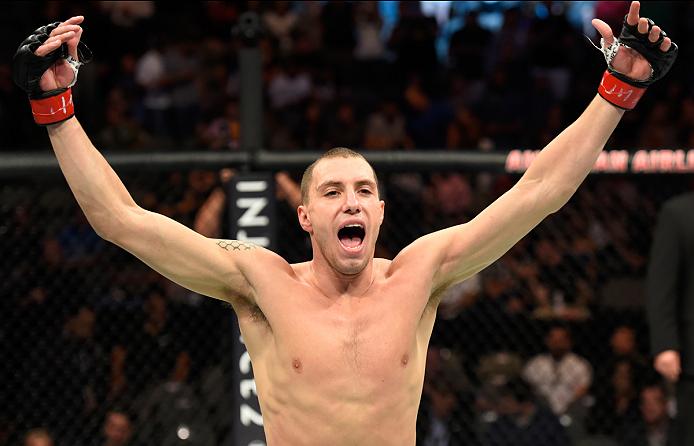 UFC: Is it nice to come home to your son and take your mind off fighting?
Vick: It takes your mind off of fighting a little bit and takes your mind off of other stuff a little bit. Just to hold your son and look at him and know he came from you, it’s just a great feeling.
UFC: How do you want to get it done on Saturday?
Vick: In a perfect world, first round knockout with something dynamic like a vicious straight right hand, a flying knee, or a head kick. Something like that.
Gavin Porter is a digital producer and writer for UFC.com. Follow him on Twitter at @PorterUFCnews