Vick has arrived, and nothing can shake his good mood

James Vick has arrived. He’s in his first UFC main event this Saturday, on the poster, and about to take a leap into a new stage of his career.

Vick laughs, clearly letting nothing get in the way of his good mood, not even the talk that will undoubtedly call him an overnight success should he beat the Arizona action hero this weekend.

“It’s crazy if they think I’m some kind of overnight success when I’ve been grinding for years now,” he said, knowing that he’s taken a longer route here than most who have put together a 9-1 UFC record. But after his stint on season 15 of The Ultimate Fighter, Vick has kept his focus tight, with the goal not being a legion of Twitter followers or fame, but something more important, something he’s been chasing from the first day he began training.

"This is my number one focus and I believe that I mentally stronger then all these guys. I really believe that in my mind & my heart that it’s my destiny to become a world champion." - @JamesVickMMA feeling confident heading into his #UFCLincoln main event vs. Justin Gaethje. pic.twitter.com/kfo2zdb3cj
— UFC News (@UFCNews) August 22, 2018

“I remember when I first went into the gym and started training, I told everybody the second or third day I was there that I was gonna be a world champion,” he said. “People looked at me like I was stupid. They didn’t think I’d ever be a pro fighter. But I didn’t sign up to be second best at anything. Something can delay my destiny, but nothing can stop my destiny. And I really believe it is my destiny to be a world champion.” 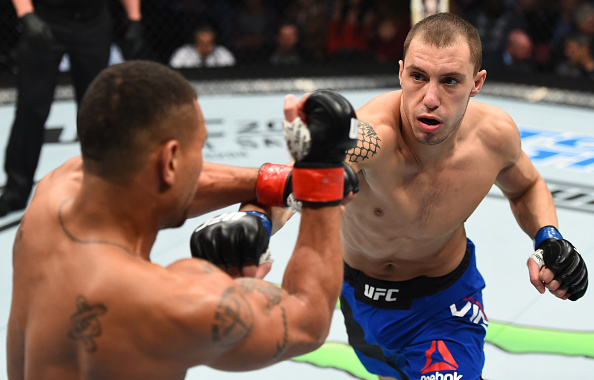 The 31-year-old Texan has always been big on writing down his goals and visualizing them, yet he admits that even after putting together a four-fight winning streak that included a decision win over Francisco Trinaldo and three finishes of Joe Duffy, Polo Reyes and Abel Trujillo, he was wondering when his time would come. It wasn’t supposed to be this weekend, as he was originally scheduled to fight Paul Felder in July. But when fellow lightweight contender Al Iaquinta fell out of the Gaethje fight, opportunity knocked for “The Texecutioner.”

“I had some doubts at times – not about my skill set, but about the opportunity,” said Vick. “Was I ever gonna get the opportunity? Then fortunately I was gifted this opportunity because Al Iaquinta couldn’t fight. But I’ve always been ready for it. I feel like it’s close and I definitely feel that next year I will be a world champion. I believe that with all my heart.”

Sometimes everything falls into place when it’s supposed to. Yeah, Vick thought of fighting Felder and then having the rest of the summer to spend time with his girlfriend and their four-month-old son James Jr., but there was no doubt that when he got his shot, he wasn’t going to pass it by.

“I was looking at having the summer to chill, but this is always my main priority and I love fighting,” he said. “I live for this stuff and this is part of the sacrifice. As a pro athlete, you only have a short window to have a career, and I’m willing to go year-round and do whatever I have to do to get to my goal of being a world champion. And after Saturday, I’m gonna change my life.”

If you’re not James Vick, it’s hard to imagine being in a position where all the years of hard work have come down to 25 minutes or less that can change everything. And while for most that would be unfathomable pressure, it’s what Vick has been chasing since he first put on the gloves.

“You win a UFC main event, it is life changing, especially with us both ranked high,” he said. “I win this fight and I’m one of two fights away from a world title. But pressure is for mentally weak people. I don’t feel any pressure at all. In my mind, I could fight this dude in the backyard, I could fight him anywhere, but my goal is to be a world champion. I don’t care what the stage is. I’m past all that. I’ve had ten fights in the UFC, I’m not worried about any pressure.”

Need a reminder of the hurt that @JamesVickMMA can unleash? Flashback to UFC 211 when 'The Texecutioner' met Marco Polo Reyes in this edition of Knockout of the Week. #UFCLincoln pic.twitter.com/66FcL0ky6N
— UFC News (@UFCNews) August 21, 2018

It’s easy to believe him, as well as be happy for him that he has his shot and his dreams within reach. This isn’t an easy business, but being able to control your own destiny is something everyone hopes for. It’s why through all the ups and downs of life in the fight game, Vick wouldn’t hesitate to support his son if he wanted to follow in his footsteps one day. 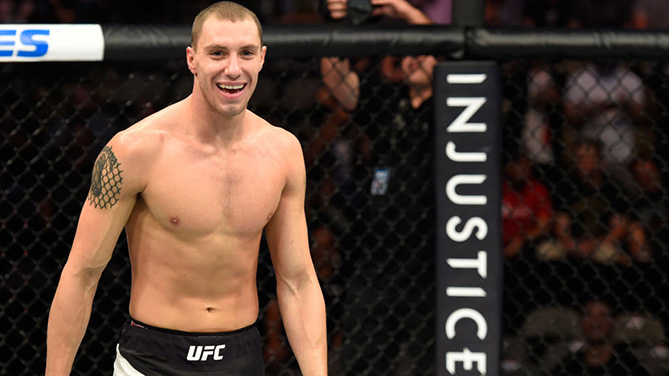 “I’d be the happiest person alive,” Vick said. “Everyone says how rough this is, but everything in life is rough. Yeah, my body’s messed up, but both of my brothers’ bodies are messed up from working in the oil fields for all the years they have. But fighting has lifted me out of poverty. I went from a small town kid in a town of 3,500 people to fighting on the biggest stage in the world with only 600 people in the world being in the UFC. Fighting has done everything for me, and I would love if my kid wanted to be a fighter. It’s not just about being a fighter, it’s about what type of man you become on this journey of challenging yourself. I’m not gonna force him to be a fighter, but if he wants to be, I’ll be happy as hell if he is.”

Yeah, you’re not gonna shake James Vick’s good mood. He made it to where he wanted to go. All that’s left is the fight. And he’s always had that part of it under control.

“I understand what’s at stake Saturday night,” he said. ‘I’m fully aware this is either my one and only main event or one of many main events. So I have to perform and I will. I’ll get in there and I will change my life on Saturday night.”