Vick Doesn't Use Weight Cuts As An Excuse

“It really annoys me when someone gets their ass kicked and they want to blame the weight cut."
By E. Spencer Kyte, on Twitter @SpencerKyte • Oct. 8, 2019

James Vick is the latest name to be added to the ever-growing list of fighters moving up a division in search of greater results and greener pastures.

Over the last several years, myriad competitors have moved divisions, relocating to a new weight class after dropping pounds became too punishing. Some, like Anthony Smith and Thiago Santos, had immediate success that led to championship opportunities, while others, like Michael Chiesa, have enjoyed strong starts in their new divisions, shifting stalled careers hampered by dropping heavy amounts of weight into promising futures all by keeping some extra pounds on.

This weekend, Vick makes his first appearance in the UFC as a welterweight following a six-year run at lightweight that yielded a 9-4 record, but ended with a three-fight skid, which is the part that really prompted the towering talent from Fort Worth, Texas to decamp from the 155-pound weight division.

“It really annoys me when someone gets their ass kicked and they want to blame the weight cut,” said the six-foot-three Vick, who squares off with all-action finisher Niko Price in his first venture into the depths of the 170-pound ranks. “I don’t believe in all that. My issues have been technical.”

Although observers have long marveled at how the tall, rangy fighter managed to make the 155-pound limit, the reality is that Vick has never missed weight in his career. Sure, hitting the lightweight limit wasn’t easy, especially given his propensity for straying from his diet during training camp, but throughout his career, Vick has always pushed through, shed the pounds and came in on weight.

What he’s failed to do, however, is keep his hands up and his chin tucked and it’s those issues, not any phantom challenge with the scale on Friday morning, that has resulted in the once surging fighter getting knocked out in two of his last three fights.

“The only issues are technical issues — defensive flaws like dropping my hands and keeping my chin in the air,” said Vick, who parlayed a four-fight winning streak into a main event showdown with Justin Gaethje last summer that now stands as the starting point of his recent string of losses. “Realistically, they’re problems I’ve had for years, but no one has been able to capitalize on them until recently.

“I’m not blaming the weight cut like some people do,” he reiterated. “For me, it’s all technical and in my mind, I’m winning all these fights if I keep my f****ing hands up. I’m mentally as strong as it comes and even though I’ve lost these three fights, I don’t have doubts. In my mind, in my heart, I believed I was going to win all three of those fights. I didn’t go in there doubting that I would win those fights. I believed with all my heart that I was going to win those fights and I’ve never lost that confidence.

“The two times I’ve been knocked out, I’ve been caught with my hands down,” he added regarding his losses to Gaethje and Dan Hooker, who just cemented his standing as one of the lightweight division’s elite by defeating Al Iaquinta last weekend at UFC 243. “Just two fights ago I lost a razor-thin decision to Paul Felder; it was a super-close fight and he’s ranked No. 7 in the world.

“I’m still a world-class fighter and I believe that with all my heart. To me, it’s just about not getting caught having bad defensive flaws.”

Despite his assessment of the situation, the 32-year-old also recognizes that now might be the best time for him to explore this avenue and take advantage of the opportunity to switch divisions and not shed as much weight before stepping into the Octagon. 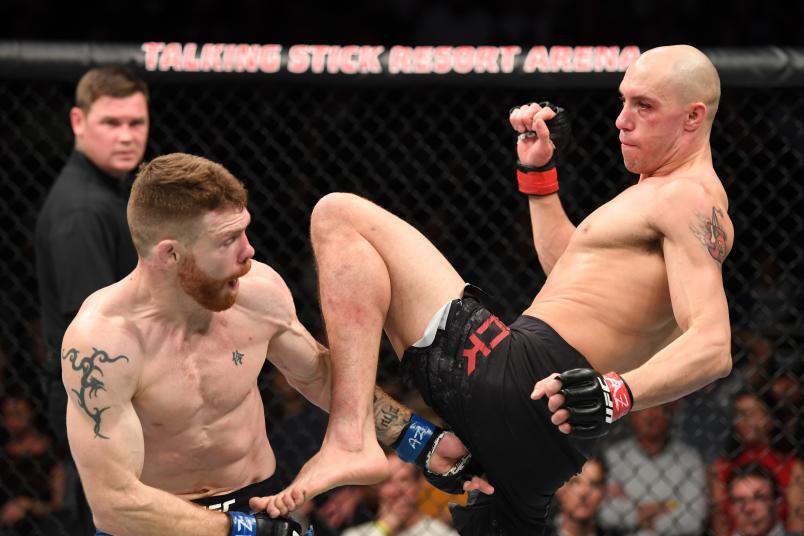 More From UFC Tampa: Fighters On The Rise | Fights To Watch Before Tampa | Free Fight: Waterson vs Kowalkiewicz

The lightweight division is perpetually flush with talent and while getting multiple fights, marquee opportunities and prime real estate on fight cards is common place when you’re posting victories and pushing towards the Top 10, Vick has dropped three straight, so why not see if he can jumpstart a new run of success by wading into the fray in the equally competitive, equally loaded welterweight division.

“The biggest factor was that I’ve lost several fights in a row here and this becomes a chance to re-invent myself because I’m blessed to be getting another fight in the UFC after losing three in a row, and I know that,” said Vick. “But I’m not in the Top 15 anymore, so what’s the point in sacrificing the weight, doing that weight cut if I’m not in the Top 15? At the same time, it’s a chance to reinvent yourself and it looks good to the public.”

Though he admits that preparing to fight at 170 pounds is messing with his head a little because he’s so accustomed to cutting weight, the rangy striker knows that Saturday’s pairing with Price, which closes out the preliminary portion of the card at Amalie Arena, is a prime opportunity to make a splash in his new surroundings.

A Florida native, the 30-year-old Price has become a favorite amongst the hardcore set for his relentless aggression inside the Octagon.

In his first nine appearances inside the UFC cage, “The Hybrid” has gone 5-3 with one no contest result, with each of those nine contests ending before the second round expired. Along the way, Price has pulled off upsets, pushed emerging contenders, put Randy Brown to sleep with hammerfists off his back, and planted his back foot and felled Tim Means in one of the most action-packed five-minute fights you’re going to see.

While he arrives in Tampa to face Vick off a second-round loss to surging Fortis MMA product Geoff Neal, it was another typical “Niko Price Performance,” where the action was hot and heavy on both sides until the rising welterweight contender started putting together what turned into the final flurry.

“I feel like it’s a good matchup for me and we’re in the same boat the two of us,” Vick said of the pairing with Price. “I’ve been knocked out in two out of my last three fights and so has he. I’ll probably be a decent sized underdog in this fight because I don’t know if people necessarily believe in me at this point, but to me, we’re in the same boat.

“He’s not any bigger than I am,” he added. “He may be a little bit thicker just because he’s a little shorter, but I don’t feel like I’m undersized or physically outmatched at all.

“I expect to go out there, keep my hands up, my chin down and win this fight. He’s a dog, he’s a warrior — the guy is tough and he’ll fight until the end, but I think I have way more tools, overall. He has power, he has a good ground game, but I don’t think it’s any better than mine. We’ll see how things go, but I’m very confident.”

It feels like ages ago that Vick stood in the center of the Octagon inside Madison Square Garden, pleading for a chance to prove himself against the best the lightweight division had to offer following his blistering second-round finish of Joseph Duffy at UFC 217.

He followed that win up with another against Francisco Trinaldo, but it’s been all downhill ever since, and after enjoying a 12-month run with nothing but success, Vick has now endured 20 months without a victory and he’s sick of walking away from the Octagon without getting his hand raised.

“I’m not going to lie: this has been the worst year of my life, by far,” he said. "I lost three fights, I had a business deal go bad where I lost some money, my best friend died two months ago. It’s been the worst year of my life, but I’m seeing nothing but blue skies ahead. This is going to be a cap to the end of the year and I’m fixing to turn it around.