While Vicente Luque knows he deserves big fights, he wants to show that he is always going to be ready to fight and to earn his shot at the welterweight division's elite.
By Gavin Porter, On Twitter @PorterUFCNews • Jul. 30, 2020

Vicente Luque’s five-year UFC stint has been full of highlights and thrilling performances that have caught the attention of MMA fans around the world. The Brazilian fighter has 10 finishes in 14 career UFC bouts and has proven himself to be one of the most exciting fighters in the welterweight division.

But despite his impressive performances, Luque is still looking to breakthrough and stake his claim as a true title contender.

“The Silent Assassin” believes he had his biggest opportunity at UFC 244 against Stephen “Wonderboy” Thompson, and while he came up short in that bout, he knew the only thing to do was get back in the win column.

“That was a big opportunity against Thompson, and I didn’t perform how I wanted to,” Luque told UFC.com. “At that point I understood that I had lost and that I needed to get back on the winning track even if it wasn’t against someone in the top ten. It’s a tough time to be calling people out. I just felt that I needed to get a fight and keep doing what I love.”

That desire to compete led Luque to a rematch with fan favorite Niko Price at UFC 249 in the UFC’s first event since the COVID-19 pandemic cancelled sporting events across the globe. He left Jacksonville with another victory and quickly signed a bout agreement to face prospect Randy Brown at UFC Vegas 5. 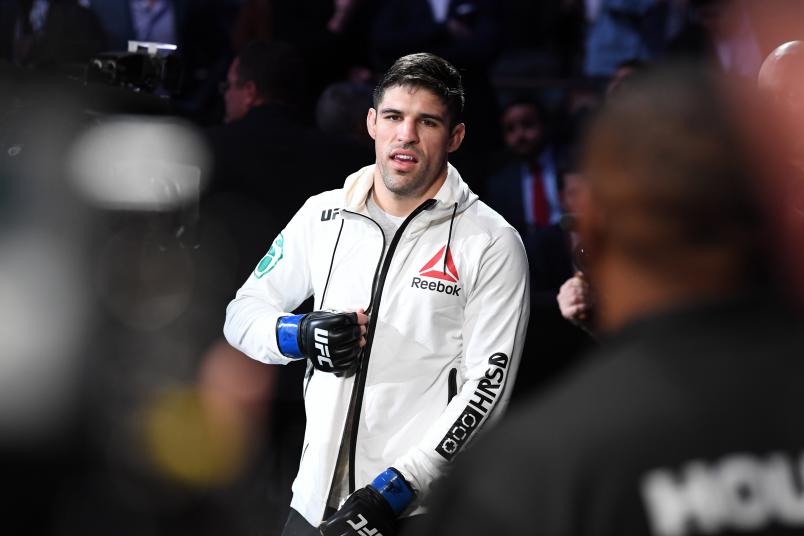 Vicente Luque of Brazil prepares to enter the Octagon prior to his welterweight bout against Stephen Thompson during the UFC 244 event at Madison Square Garden on November 02, 2019 in New York City. (Photo by Josh Hedges/Zuffa LLC via Getty Images)

Fighting whoever, whenever is something that Luque, who is only 28 years old, has seen help propel close friend and teammate Gilbert Burns to the top of the welterweight division.

“Gilbert is a big example, he’s been working so hard for so long and I’ve been by his side and he’s been by mine,” Luque said of Burns, who he first met in 2014 when both fighters were members of the famed Blackzillians. “We look to get the best from each other and looking at his success, I definitely try to emulate that. We love fighting, that’s all we talk about and we both are going to work to get to the top of this game.”

The biggest thing that Luque took away from Burns’ rise was that “Durinho” was always ready for an opponent. He saw how much the UFC valued that mindset during such tumultuous times and how staying busy led to bigger fights.

And that’s why Luque is excited for what he believes will be a true challenge in “Rude Boy” this Saturday.

“I was originally looking to fight a ranked guy, but I took a fight with Randy Brown to keep myself active. None of the ranked guys were available and yes, I want to fight tough top ten level opponents, but I can’t just stop fighting; it’s what I do,” Luque said. “Brown has some dangerous boxing and he understands how to use his reach. Fans are going to see a lot of technical striking and if he brings his heart to the fight, I think we are going to be Fight of the Night.”

If he and Brown earn are awarded Fight of the Night, it would be Luque’s fourth time being honored for such a performance. Luque loves those gritty back-and-forth wars, but he also prides himself on finishing fights. In fact, Luque has earned 10 of his 11 UFC wins by either knockout or submission.

Even though Luque expects to extend that finishing number to 11 at the UFC APEX on Saturday, he wants to show that really does belong fighting the elite members of the division.

“I’ve always felt that finishing a fighter is the most dominant thing I can do,” Luque said. “Maybe I need to go out there and show that I’m at a different level and separate myself from these guys. That’s something that people are expecting from me and I need to be technical and not only go out there and knock him out but outclass him.”

Watch the welterweight battle between Luque and Brown on the UFC Vegas 5 main card, which starts at 9pm ET/6pm PT on ESPN+.