Veronica Macedo Her Own Biggest Critic

Veronica Macedo halted a losing streak with her first UFC win last November. But she's preparing for UFC Brasilia and Bea Malecki like nothing has changed.
By Thomas Gerbasi, on Twitter: @TGerbasi • Mar. 12, 2020

“Do you have any idea how cool my job is?” Veronica Macedo asks. “It is so cool to be able to do what I do.”

That’s good to hear, especially since the 24-year-old has gone through the ups, downs and sideways of the fight game pretty consistently during a UFC run that began in 2016. But as she approaches her Saturday bout against Bea Malecki in Brasilia, don’t expect her to call this a fresh start after finally breaking into the UFC win column in her fourth try last August.

“Not really,” she said. “I always try to evolve as a martial artist. In a fight, no matter how well you prepare, it's 50-50, right? One fighter wins and one loses. And after every fight, the one that wins is always really happy and the one that loses is like, 'Hey, I'm gonna come back stronger and I'm gonna train more and do this.' But it's the game - one wins and one loses, unless it's a draw, and that's just how it is. So I just try to always focus on becoming better.”

In other words, fighting isn’t always about the end result. It’s the journey, especially for Macedo, someone always looking for more knowledge in her chosen art. 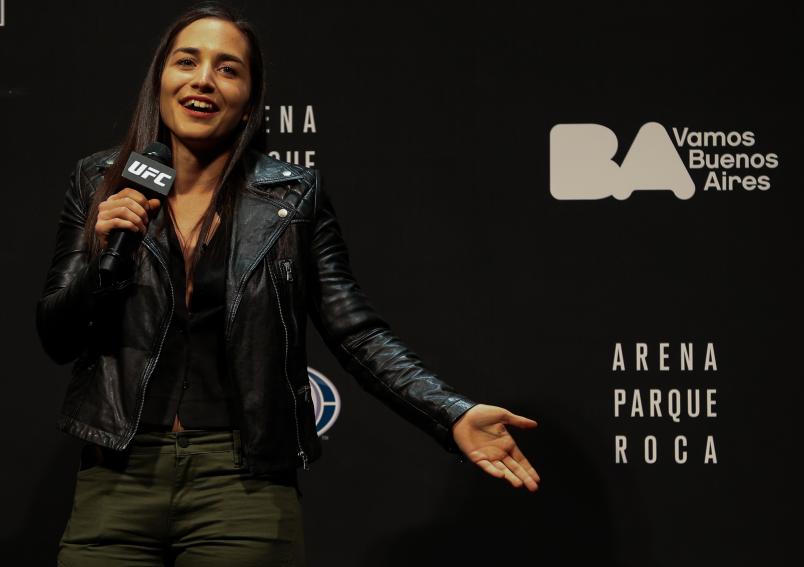 “MMA is so new and there's so much to learn, and it's so fun because there's so many martial arts and more and more I see different ways that people do things, and also how similar they are,” she explains. “I'll go to Spain in this little village and they’ll do the same thing as somewhere in America in a big gym, or somewhere in France or Brazil. These people have never seen each other, how is it that they do the same thing, or why is it that they do something different, and how can I implement that in fighting? For me, that's just so amazing, and the fact that I have the opportunity to apply that and have so many people watching me, and having all that pressure and adrenaline, it is awesome.”

It can sound appealing, especially for a world traveler who has been able to train in such diverse locales as Brazil, England, France, Holland and the United States. But at this level of the sport, results need to match up to the journey, and Macedo was in a dicey position heading into her bout with Polyana Viana in Uruguay last summer.

The fight was a home game of sorts for the Venezuela native, since it was being held in South America, and after losing her first three UFC bouts, Macedo needed a win.

She got it, taking just 69 seconds to submit Viana and pick up a Performance of the Night bonus. All was well in the world of Veronica Macedo. Or was it?

“To be honest, I still kind of don't know what that feels like because the fight ended so quickly,” she said when asked about the emotions of getting her first UFC victory. “I've been so hard on myself lately. Three straight losses, and even though that fight was great, and the submission was nice, I'm still pretty hard on myself. Yeah, we did something nice but you still messed up three times before that and it's still not okay. That doesn't make up for everything wrong you did before that. You still have so much to prove and it's not enough.”

Yeah, that is being pretty hard on yourself.

“It's like when you're about to fall off a cliff and somebody grabs your hand,” Macedo explains. “You're still falling off a cliff, but now you're kind of holding on and you haven't fallen off yet. But you're still in danger of falling. I was very happy because I didn't end up falling that night.”

Some people pay for that whole jumping off the cliff thing.

“With a bungee cord, that's great,” she laughs. “I love all that, but there has to be some type of safety net attached to it.”

That may be the beauty of this business is that there is no safety net. Like she said, it’s win or lose on fight night. There is the odd draw, but take that possibility away and it’s all or nothing. And just like one win can change everything, so can one loss, or two, or three.

Those three losses – albeit against solid competition like Andrea Lee, Gillian Robertson and Ashlee Evans-Smith shocked many fight game observers who predicted championship belts and stardom for Macedo, who had the talent and the personality to change the game.

But here’s the thing: she still does have that talent and personality, and when she locked up the armbar that put her in the UFC win column for the first time, maybe it wasn’t a personal victory or a fresh start for Macedo, but for those who believed – and believe – that she’s destined for big things.

And that’s worth celebrating.

“When I got signed by (UFC matchmaker) Sean Shelby, I think he took a giant risk because when you sign a fighter, you also put your reputation as a matchmaker on the line,” said Macedo. “So I felt I was letting a lot of people down (when I lost) - not only myself, but people around me that had belief in me. I felt that after that fight, I kind of proved to them that you didn't mess up. It was a thank you to them, a show of gratitude, for sticking their neck out for me.”