Vera Will Fight Anyone

After back-to-back finishes of Wuliji Buren and Guido Cannetti that put him back on track to crack the bantamweight top 15, Marlon Vera had the perfect fight to achieve that goal in the form of Thomas Almeida. But when Almeida was forced from the UFC 235 bout due to injury, “Chito” was a man without an opponent.

“I was excited for the Almeida fight,” said Vera. “I was ready to go, and I was willing to bleed and willing to go crazy in there to make it happen for the fans. So, of course, I was looking forward to taking him out and taking his spot. He got hurt, nothing changed. I didn’t get sad, and the motivation is the same because it wasn’t meant to be.”

And Vera still wanted to fight. He wished Almeida well for a speedy recovery and then let his manager know that he had no intention of giving his spot on the March 2 card up.

“They offered me a list of five names,” Vera said. “My answer was, ‘The first mother**ker to say they’ll take the fight, let’s go for that one. I don’t care who it is.’ They called me two days after with Frankie Saenz. He wasn’t on the list, but I said, ‘Let’s go.’ I know they have different styles, but I’m prepared, I’m in shape, and I’m willing to fight anybody because that’s the only way to get to the top. I’m not picking opponents or styles. I’ll fight whoever’s in front of me.” 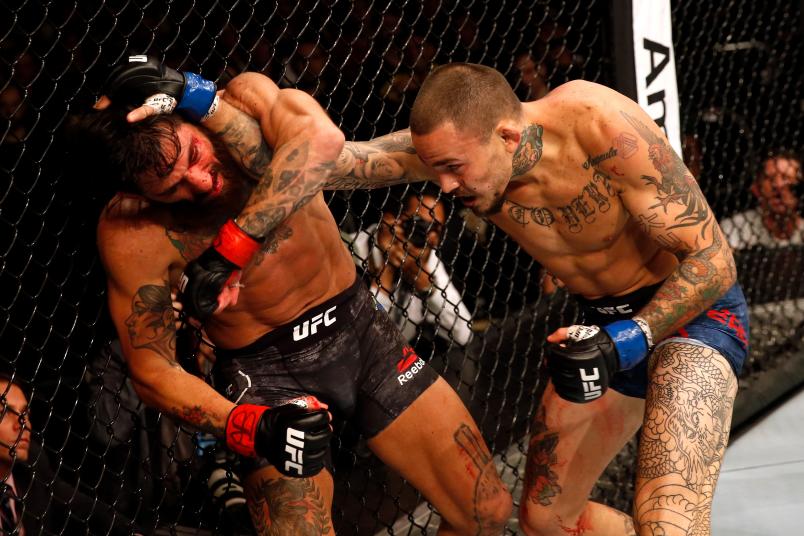 So Vera vs Saenz it was, though not on March 2, as a fight week illness suffered by Vera pushed the bout to this Saturday’s card in Nashville. And whether in Nevada or Tennessee, the 26-year-old is hungry to out the gloves on and attempt to push his winning streak to three.

“It feels great, I’ve got good momentum, I feel motivated, I feel sharp and I just love to be active,” he said. “That, and being healthy, is the most important part for me.”

With ten fights already under his belt in the UFC, Vera has had a nice run in the Octagon, and after some starts and stops, a win over Saenz will set the stage for him to make his move on the 135-pound elite.

“Honestly, I’m chasing that momentum, and I want to make it happen this year,” he said. “I want to climb the rankings, I want to be able to put on big fights and be able to put on a show. A lot of people want to get to the top, but they don’t want to work for it. I’m working for it, so that when I get there, I will be prepared to perform and execute what I want.”

And though a big part of his motivation on the way up the ranks was to get the money for the surgery to treat his daughter’s Moebius syndrome, now that the surgery is done and Ana Paula is smiling, Vera has lost none of his hunger to succeed, not just for himself, but for his wife and three kids.

“It’s the same thing that motivated me when I started – my family, my kids,” he said. “The surgery is already done and it’s not a weight on my shoulders. I will never have to answer the question, ‘Dad, why did you never make it happen, why didn’t you raise the money?’ I won’t have that question, so I don’t have anything to torture me anymore. My heart is not sad anymore because I don’t see my daughter smiling the way my other two kids smile, so now my heart is warm, my mood is always positive, and my family’s doing good. I just keep the same drive as before the surgery, and it’s for my kids and providing what they need and making them happy and trying to make them the best people they can be, and go from there. And the drive is always there.”

That drive makes Marlon Vera a dangerous fighter, and nothing more needs to be said. But the Ecuador native is also a smart fighter, and he knows that sometimes a little pre-fight gamesmanship isn’t a bad thing. But as he points out, when it comes to his matchup with Saenz, it isn’t personal, just business.

“This is an entertainment business, so sometimes you have to put a little spice in the food to taste better, and I’m willing to put all the spice in there if I have to,” he said. “But I have zero feelings about. I’m not taking anything personal. He (Saenz) was free, I was free, so let’s fight. I expect he wants to make some money, so he will make one check that night, and I’m making two.”