Vera has clear set of goals to kick off 2018

By all accounts, Marlon Vera had a pretty good year in 2017, going 2-1 with a pair of finishes over Brad Pickett and Brian Kelleher before losing a decision to John Lineker in October. He would agree. 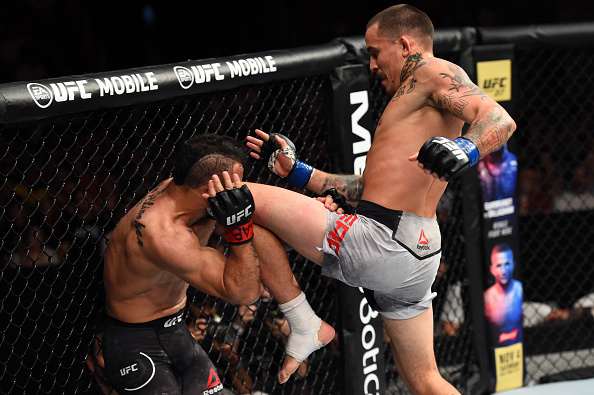 “I can’t complain, it was a good year,” Vera said. “I fought the number five fighter in the world and it didn’t go my way, but it was a pretty close fight, and I feel really good about this year and how everything went. Now I’ve made adjustments and I’m ready to go.”

Tomorrow night, Vera will be in Belem, fighting for the second consecutive time in Brazil as he faces Douglas Silva de Andrade. It’s his eighth trip to the Octagon, which makes his 2017 run even more impressive, because as a native of Ecuador, he came up a lot harder than most of his peers when it comes to the world of mixed martial arts.

“Of course, it’s something amazing thinking about it from that point of view,” he said. “Coming from a place where there wasn’t the top training, but a good quality of people, it’s amazing to see how far I’ve come.”

Now in California, where he has been training with the Team Oyama crew, Vera has seen the evolution of his fight game. And he’s become a beacon of light for fighters back home that hope to one day follow in his footsteps and get to the UFC.

“I tell them, ‘You guys are good, you’re doing a good job, but you’ve gotta make the next step. You’ve got to get a visa and fly to the U.S. You don’t have to come to my gym, just find a place that you like and develop yourself.’ Look at the soccer players. They’re doing great in Ecuador, but as soon as they go to Europe or somewhere where soccer is big, they start becoming monsters and huge names in the sport.”

Yet while leaving home to chase those dreams is part of Vera’s story, the most important part was learned back home in Chone.

“I don’t come from the streets,” Vera said. “My dad was always a hard worker and we had everything we wanted when we were kids. And we had that example. We weren’t a wealthy family, but I had food, an education, and my parents worked together and they showed me good values. I got that hard work from my dad. And I try to do the same with my family. Be a hard worker, and even if I don’t have something, I find a way to give it to them. That was the best example I could have.”

He’s made his parents proud, with dad making it to a few fights, but mom…well, that’s a work in progress.
MORE FROM FIGHT BELEM: Full fight card preview | Rogan previews Machida vs Anders | Belem Fantasy Preview

That’s okay with the 25-year-old, who took another fight in Brazil with no hesitation, saying, “They (the fans) probably like me now.”

What’s not to like with Vera, an honest fighter who always shows up to win. And in 2018, his goals are clear.

“Keep working hard, keep looking forward for opportunities, don’t look past anyone like I did last year and try to be a better person, a better father, a better husband, a better fighter,” he said. “I want to try to crack the top 15 and start from there and have an undefeated year.”