Vera fighting for daughter's chance at a smile 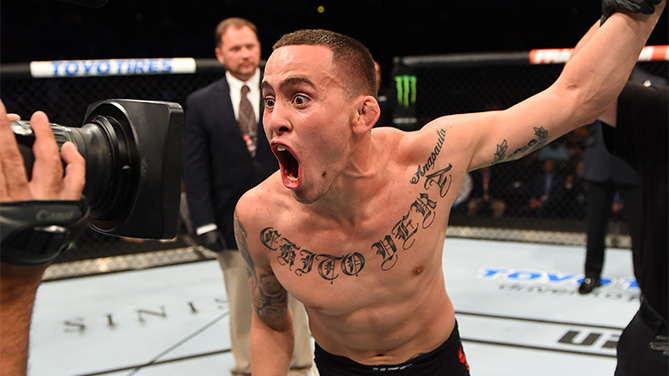 Being a pioneer isn’t easy. Marlon Vera, the first fighter from Ecuador to make it to the UFC, knows this better than anyone. But there is no quitting now, and like the first person to do anything, the goals have little to do with fame, glory or the history books.

“I need to do two things with the money from fighting,” he said. “I need a house and I need the surgery for my daughter. I need to see my daughter smile. That's really important for me.”

Vera’s daughter, born with the rare neurological condition Moebius Syndrome, leaves her unable to smile. Surgery will help, but that will take some more fight purses to make it a reality.

“They could make the surgery when my daughter turned four,” Vera said. “She is already five and she's ready to go but we need the most important thing, the money. So daddy needs to kick some ass, finish the fight, and get the money.”

This Saturday in London, he gets a chance to win, finish and pick up a second consecutive post-fight bonus check when he faces Davey Grant. It’s an intriguing clash between former Ultimate Fighter competitors, but even with this being his first trip to London, Vera isn’t interested in any sightseeing.

That’s as businesslike as it gets, and that’s the point for Vera. This isn’t a lark for the Chone, Manabi native. This is his life, and only by dedicating himself fully to it can he reap the benefits of the sacrifices that he’s made. And doing it in Ecuador, far from an MMA hotbed, only makes it that much more difficult.

“It's kind of hard,” he said. “We don't have a lot of fighters here, but we're working on that and we use what we have. We get some sparring partners and there's good jiu-jitsu here, but in MMA, we don't have the partners I need. My coach (Frank Vidal) makes good work and I do what I can do, but I need a little more, I think. It's not the same as being in the USA and training with a bunch of fighters, where everybody wants to be in the UFC, and everybody wants to train hard. Sometimes I come into the gym and there's nobody to train with. But we do what we can do. I need people like me who want to do it the whole day.”

Vera does say that the sport is growing among the fans in Ecuador, and after the Grant fight, he expects to scout some training locations in Los Angeles with his manager, but for now, it’s a fairly lonely battle that he wages, one that he has been fighting since the age of 16.

That’s a lot of maturity for a 23-year-old with just 10 pro fights. He laughs.

“If you have your first daughter at the age of 17 years, you have to mature and be a man,” Vera said. “I can't act like a kid. I have two kids. My son and my daughter, they are the kids, so I have to act like a grown man and think like a man and do what men do - work hard every day, get my house, and give my family a better life. I have to do the same thing that my dad did. He gave me the best and I give the best to my son and my daughter.”