Vera determined to put on a show for his hometown fans 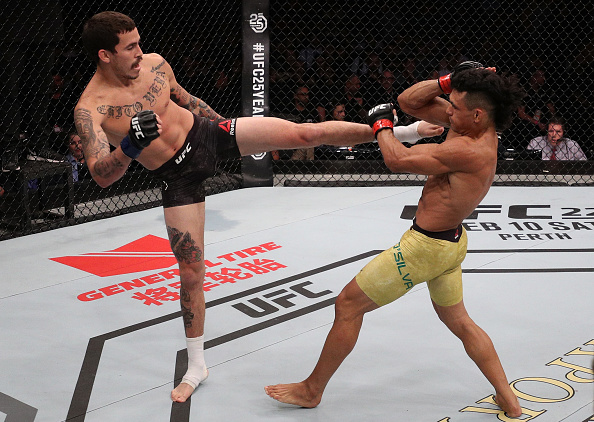 Marlon Vera of Ecuador kicks Douglas Silva de Andrade of Brazil in their bantamweight bout during the UFC Fight Night event at Mangueirinho Arena on February 03, 2018 in Belem, Brazil. (Photo by Buda Mendes/Zuffa LLC/Zuffa LLC via Getty Images)" align="center" />
It’s not a UFC world championship. But it’s better, as far as Marlon Vera is concerned, to see his seven-year-old daughter Ana Paula finally beginning to smile.

Plagued by the rare neurological condition Moebius syndrome, which left Ana Paula unable to smile, Vera and his family have spent several years raising the money for the surgery to address the issue, and on June 20, thanks to a GoFundMe page that raised half the money while the Veras delivered the other half, this young lady can smile.

“She’s doing great,” said the proud papa. “The smile is coming up really good, we can see it a little bit now and I feel like all the work we put in and all the help that my friends, fans and family put in that GoFundMe is paying off. I feel blessed, I feel great.”

It’s almost impossible to put into words what this means for the Ecuador native, who makes his return to the Octagon this Saturday against Wuliji Buren. And it’s made him even more dedicated to his craft and his dreams of becoming a world champion.

“It’s changed my life and my wife’s life,” Vera said. “We didn’t really see the changes at first because we see her every day, but when you look at the before and after pictures, it’s something amazing. When I see that, it melts my heart and it makes me work harder and makes me a better person.”

And while Vera is always in the gym, summer vacation did have to take a backseat a couple weeks ago when he got a call asking him if he wanted to replace Bharat Khandare against Buren. Vera checked his weight, it was good, and he was in.

“Tell me who and when,” Vera told manager Jason House. And here he is, looking to snap the first two-fight losing streak of his career. Those last two bouts were decision losses to John Lineker and Douglas Silva de Andrade in Brazil, but now he’s back on familiar turf in his adopted home of Southern California.

“I feel it’s like my backyard,” he said. “I have two years living in California and this is the place that I call home now. I have a lot of friends here, I have my family here, so I feel the people will cheer for me and I’m down for putting in a great performance. Every time I go to the cage, I’m thinking of winning, of course, but I always think that I have to put on a show.”

Already eight fights into his UFC career after competing on season one of The Ultimate Fighter Latin America in 2014, Vera is still just 25, with plenty of upside in a tough bantamweight division. And though he is likely to be a heavy favorite against Buren, don’t expect “Chito” to be overlooking his foe.

“Let’s be honest, this is the fight game,” Vera said. “(Former UFC middleweight champion) Luke Rockhold was so confident and so cocky when he fought (Michael) Bisping (in their rematch), and Bisping is a great fighter and a world champion, but on paper, there was no way he would beat Rockhold like that. Rockhold lost that fight because he got cocky. I don’t feel cocky at all. I feel confident, I feel I train hard, and this is the fight game. I don’t think I’ll just go out and walk through this guy. No. This guy is gonna throw punches and try to put me out. So I’m gonna be smart enough to stick to the game plan and just beat this guy.”

If he does, that will put him past the .500 mark in the Octagon and allow him to breathe a little easier while he reloads for another run at the top. And through it all, expect the fans that have been behind him over the last four years to stay right by his side. That support isn’t overlooked, either.

“To be honest, that’s what keeps me here, that’s what makes me train hard and not give up,” Vera said. “It makes me do a little extra. I’m here to stay, I’m here to make a statement and after I beat this guy, I want to fight the top 15 again because that’s where I belong. I’m young and I’m getting better and all the people, they mean the world to me because they want me to win and they want me to look great and I will do it for them. In this game, without fans, you’re nobody. And I’m glad they’re by my side.”