"This is without a doubt the biggest fight in UFC history." - Dana White 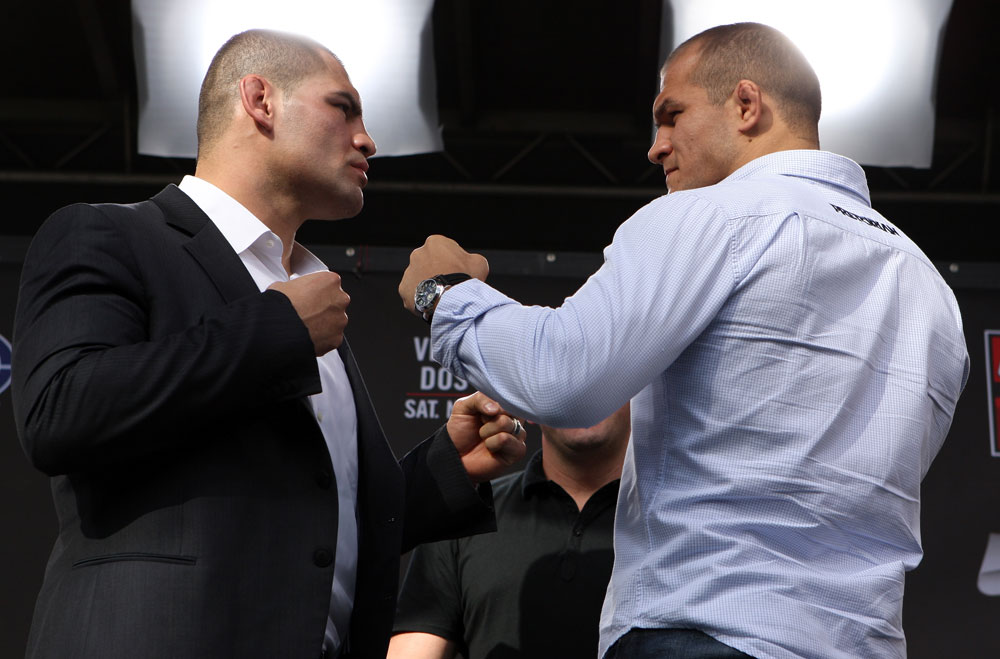 This Saturday is going to be exciting.

After running the UFC for over a decade that included over a hundred events aired worldwide on TV and pay-per-view, 14 successful seasons of The Ultimate Fighter, and dozens of champions come and gone, for UFC President Dana White, it has all paved the way for this Saturday night. For the first time ever, the UFC will be live on network television with UFC on FOX. It will be one fight, but what a fight it will be, as the UFC heavyweight title is on the line when Junior dos Santos takes on the champion, Cain Velasquez.

“This is without a doubt the biggest fight in UFC history,” declared White. “This thing started as a small fringe sport and has grown to what it is today. This Saturday night as we step out onto FOX, millions of people will see UFC who’ve never watched before. As we take this step forward into what we call ‘mainstream,’ we were much more fortunate in that we were able to hand pick a fight that we wanted to put on FOX. If I had to do it all over again, this is still the fight I’d pick to put on network television.”

On Wednesday at the Nokia Plaza in sunny Los Angeles, California, the MMA media and UFC fans gathered one more time for a chance to talk to the two fighters who are the faces of this historic event and whose fight is the main attraction for good reason. For literally millions of people, what transpires in that Octagon on Saturday night will be their first real exposure to the sport so many know and love. From their past fights and from this grueling schedule of media relations, no two fighters could have been better chosen than dos Santos and Velasquez.

“On the UFC Primetime special people got to see the kind of human beings they are, the kind of athletes they are, and on this Saturday they will get to see what kind of fighters they are,” said White.

Do not be mistaken, this is indeed the first huge step into the mainstream. We’re not talking about Chuck Liddell making a cameo on Entourage. This is the UFC heavyweight belt being defended in the Octagon on the same channel that has the National Football League, Major League Baseball and Nascar. This main event, which as mentioned is being billed as “without a doubt the biggest fight” in company history, is also just the tip of the FOX iceberg, as the UFC signed a seven year broadcast partnership which doesn’t even begin until next year. In many ways, this is just the beginning and it’s an incredible beginning.

Besides the hyperbole, the mainstream, the predictions for the future, and mundane mentions of ratings projections and ad revenues, there is an absolutely amazing fight that will be contested at the Honda Center in Anaheim, California. Whether this heavyweight clash was on FOX, pay-per-view, cable or streaming on Facebook, fight fans would be worked up into the same frenzied lather about seeing easily the two best heavies in the UFC tangle once and for all. It’s the fight we’ve all wanted to see since these two burst onto the scene in 2008 with impressive first round stoppages in their Octagon debuts.

“From both of us, we have exciting fighting styles,” states Velasquez. “We don’t go out there and put on boring fights. We’re both going to go forward. That’s what fans are going to see, that’s what people who haven’t seen this before are going to see on Saturday.”

Neither dos Santos nor Velasquez have been in a boring fight, that’s for sure. The 13-1 challenger, dos Santos, finished his first five fights in the UFC with his fists and capped off the last two brutalizing Roy Nelson and Shane Carwin for three rounds. The 9-0 champion, Velasquez, has stopped all but one of his opponents within two rounds, including former champions Brock Lesnar and Antonio Rodrigo Nogueira. Dos Santos and Velasquez are fast, athletic and when they put their hands on someone - it’s over.

Much is made of their speed and power standing up, but these two men have dangerous ground games as well, and they could be the deciding factor in this fight. “Dos Santos is a great boxer and I plan to take it to him on the feet, but I plan to take this fight everywhere,” asserts Velasquez, who is a two-time NCAA division I All-American wrestler from Arizona State University. Meanwhile, Dos Santos is a brown belt in Brazilian jiu-jitsu under the Nogueira brothers and he did display a few textbook takedowns on Carwin at UFC 131 in July.

A clear advantage the champion should have over his Brazilian counterpart will be the cheers from the Southern California crowd, as Velasquez is a Mexican-American from California who lives and trains in San Jose at the American Kickboxing Academy. “I want to represent hard working people,” explains Velasquez, who is known for his unparalleled work ethic, which he has credited to his parents, Efrain and Isabel. “Whether in training or in the fight, it’s good to know I have people supporting me and it makes me work harder and train harder. I always want to go out there and represent them well. I appreciate the support from the Mexican fans and fans all over.”

On November 12th, live on FOX, the Octagon invades network television for the first time, riding on the shoulders of the top studs of the UFC’s heavyweight division, with dos Santos fighting the champion Velasquez. “I will give my best to make this belt a Brazilian belt,” affirms dos Santos who doesn’t expect this bout to go the distance. Meanwhile, Velasquez is only picturing his first title defense as a five round war, “That's how it is in my head, that's how I'm training and that's how I'm preparing.”

Whether it goes 25 seconds or 25 minutes, the build-up for this fight plus the talent in it has the MMA world screaming with excitement, and soon enough the rest of the world too.