Velasquez and GSP take to the Silver Screen for Kickboxer: Vengeance

Certain things are untouchable. At least that was the feeling when it was announced that the “Kickboxer” series was going to get another sequel.

The 1989 original, starring Jean-Claude Van Damme, was a classic to fans of fighting films, while the subsequent four sequels were, well, not classics.

Former UFC champions George St-Pierre and Cain Velasquez were equally skeptical when asked about appearing in “Kickboxer: Vengeance,” which opens on Friday, but then they got the news that changed their mind.

“To have Jean-Claude Van Damme back in it, and to have him be a part of it, that just made it better,” he said. “With all the movies that he’s done, the classic ones like ‘Bloodsport’ and ‘Kickboxer,’ to be a part of this one, it was great.”

Having JCVD back, but this time in the role of Master Durand, and not Kurt Sloane, who is now played by Alain Moussi, adds clout to what is being described as a reboot of the original film. And for a couple longtime fans like GSP and Velasquez, getting to work with the action film superstar is one to scratch off the bucket list.

“It was a lot of fun to be a part of,” said Velasquez, who plays a local tough guy who specializes in beating down all comers for money in a local bar. “I grew up watching ‘Kickboxer,’ and these were the movies I grew up watching. I was a big fan of Bruce Lee, big fan of Van Damme, and in the late 80s and 90s, he ruled the scene as far as fighting movies. They were classics for me, so to be part of it and go over there to do a fight scene, that was awesome.” 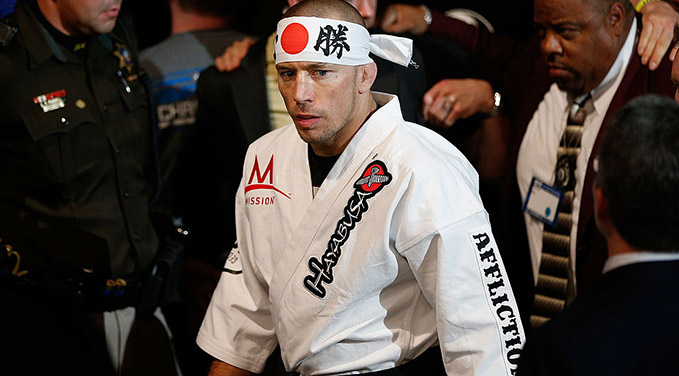 Georges St-Pierre walks to the Octagon to face Johny Hendricks in their UFC welterweight championship bout during the UFC 167 event inside the MGM Grand Garden Arena. (Photo by Josh Hedges/Zuffa LLC)" align="right" />The filming of “Kickboxer: Vengeance” wasn’t St-Pierre’s first meeting with Van Damme though, as the two have trained together in the past. And though “The Muscles from Brussels” is 55 years old, it does beg the question, could JCVD have competed in mixed martial arts if he was 20 or 30 years younger.

“Jean-Claude is a martial artist,” St-Pierre said of Van Damme, who compiled an 18-1 kickboxing record from 1977 to 1982. “He trained at a time when mixed martial arts did not exist in the 80s. Maybe if he would have been born in a different era, maybe he would have jumped in and competed in mixed martial arts. I don’t know. There are a lot of sacrifices you have to make, and you would have to put in all this time to be a good actor into training. You have to make that choice if you like movies better than competing.”

The competing future of St-Pierre, who took a hiatus from the sport after his November 2013 win over Johny Hendricks, is still up in the air, though it is clear he is leaning towards a return. As for acting, the Montrealer isn’t done with that yet.

“I see myself doing more,” he said. “I really like it, and when I go on to a movie set, I’m not acting like I know everything. It’s something totally new that I really don’t have much experience in, so I’m ready to learn. I like the people that I’ve worked with in the movie industry, they are very nice and they teach me how to do better. So it’s something completely different than what I’ve done before and I really enjoy it. I’m not as good at it as I am as a fighter, but I expect to get better.”

Velasquez has enjoyed his time on set as well, and his fellow actors are relieved that he hasn’t let one of his punches go live. 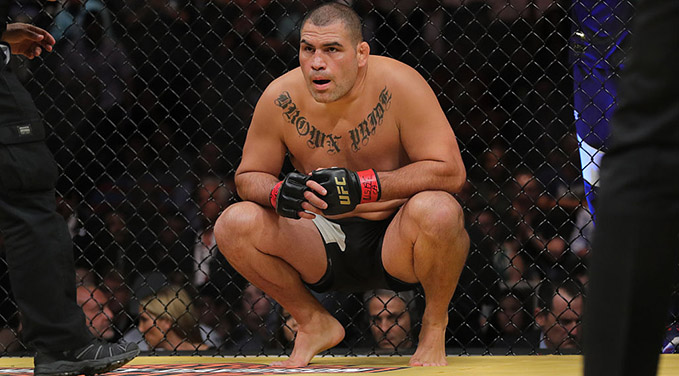 Travis Browne during the UFC 200 event at T-Mobile Arena. (Photo by Rey Del Rio/Getty Images)" align="left" />“I haven’t (let one go for real),” he laughs. “But fighting in a movie is way different from fighting in real life. In fighting, everything has to be real tight, and you can’t really show what you’re doing. You’re more relaxed and everything is close to your body. But in a fight in a movie, it’s totally different. You have to throw your whole body into everything and make everything more of an arm punch, so for me, it was way different, having more bad habits to make the movie look good. But when you see it on film, it works, and it sells the punch.”

And Velasquez and St-Pierre, along with fellow MMA standouts Fabricio Werdum and Gina Carano, do their sport proud on the big screen. But when it comes to Velasquez, is his good buddy and teammate, UFC light heavyweight champion Daniel Cormier, a little bit jealous?

“We haven’t really talked about it yet,” Velasquez laughs. “I think for him, as far as movie stuff, I think he’s done one or two. He likes TV and he’s got that show, so he can leave the movie stuff to me.”