Velasquez and Dos Santos Prepare to Ring in The Fox Era

“It's good to receive this good energy from the fans. It doesn't matter
if they are cheering for me or not. It is good that they are here
cheering for MMA.” - Junior dos Santos 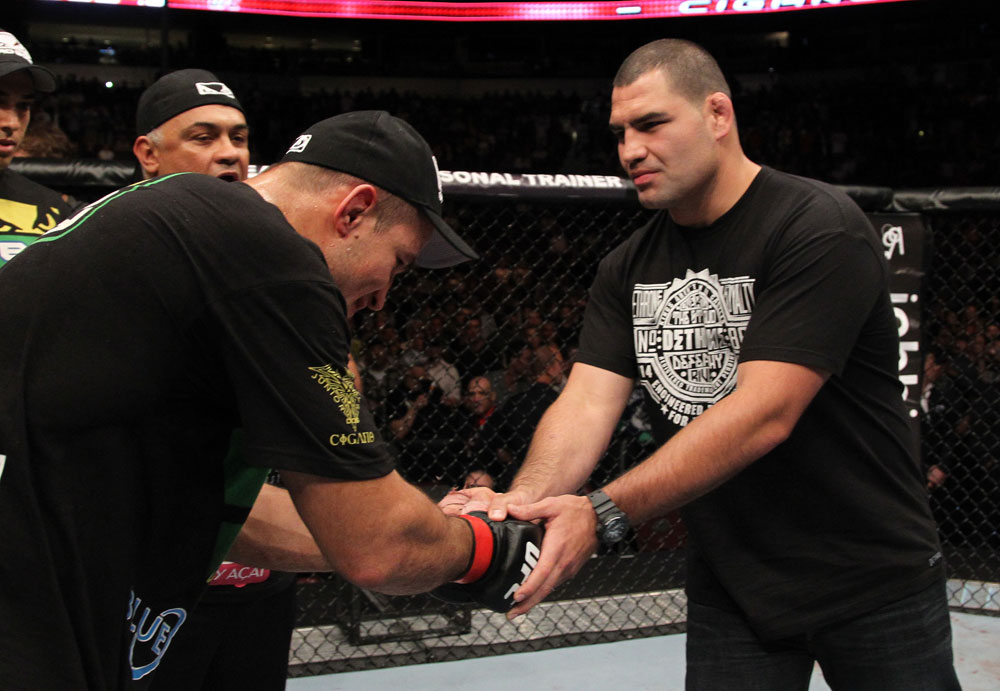 If the raucous crowd at the UFC on Fox presser Tuesday was any indication of the energy level of the fans come fight night, then the metaphorical and physical roof of the Honda Center is going to be blown off. And, yes, it will all happen live and for free on what UFC President Dana White says is the “biggest and baddest” channel on network television: Fox. On November 12th in Anaheim, California, the UFC makes company history with its first event on network television, which is a precursor to the momentous seven year deal signed with Fox that officially starts next year.

This extraordinary occasion where the Octagon will be available to be seen in action on nearly every functioning television in the world is entirely focused on one fight, one division, and one belt: the UFC heavyweight championship. As far as main events go, it does not get any better than a title fight between Cain Velasquez and Junior dos Santos. The undefeated champion, Velasquez, will be defending the belt for the first time since defeating Brock Lesnar for it last October at UFC 121. The challenger, dos Santos, has won seven straight inside the Octagon and earned the number one contender status with a unanimous decision victory over Shane Carwin in June at UFC 131.

Before these two titans can clash with that coveted 10 pounds of gold on the line, these two enormous cage-fighting gentlemen had to meet the press. The evenly split fans’ chanting and cheering for the fighters was so loud it drowned out some of the media’s questions and were jokingly admonished by White to quiet down. The excitement for the fight and this Fox event was definitely noted and much appreciated by all as dos Santos pointed out, “It's good to receive this good energy from the fans. It doesn't matter if they are cheering for me or not. It is good that they are here cheering for MMA.”

At 27 years old, dos Santos is preparing for his first title shot in his native Brazil with the renowned fighters of Team Nogueira: Antonio Rogerio Nogueira, Antonio Rodrigo Nogueira and UFC middleweight champion Anderson Silva. “Everyday I'm feeling like I'm learning more and learning the skills to be a better fighter,” says dos Santos, who is best known for his fast and powerful punching, but who showed off some picture perfect takedowns in the third round of the Carwin fight. “I love to fight standing and I'm sure to be prepared to fight on the ground. I'm learning wrestling very fast. I know Cain is a very good wrestler and he will probably try to take me down, but I will be ready for this and use my BJJ.”

As for the champion, the seemingly unstoppable Velasquez has spent much of the year rehabbing from shoulder surgery following the winning of the belt. “The recovery has been good,” explains Velasquez, 29, about tearing his rotator cuff, which delayed his first title defense. “I'm doing three practices a day now. It sucked to be off that long, but all I could do was listen to the doctors. That's all I want to do is fight in the Octagon.”

In his previous nine fights, Velasquez has only been taken the distance once and past the first round twice, but the champion is training for dos Santos to push him into those later rounds. “It's going to be a war out there for five rounds; that's how I prepare myself and that's how I go into each training camp thinking,” states Velasquez, who has finished eight of his nine fights by KO/TKO including Lesnar. “I do think this is my toughest test. He's got great hands, great power, great boxing. This is definitely going to be a good fight.”

The two heavyweights were asked if they felt any additional pressure to perform because the fight is on Fox? Both fighters agreed that it isn’t “pressure” because this is what they love to do. “No pressure to go in there and perform because that is what we do,” asserts Velasquez, noting that they’re professional fighters and going out there and giving the fans a memorable fight is what they train for and are paid to do. “I expect to go everywhere in this fight: wrestle, go to the ground, jiu-jitsu - I don't see this being fought in just one style. My wrestling, boxing, and jiu-jitsu needs to be sharp and intact for this fight. I need to be a well-rounded fighter that night to win the fight.”

The Honda Center in Anaheim, California will play host to a historic matchup and event as Cain Velasquez defends the UFC heavyweight championship against Junior dos Santos live on Fox. For the expected millions of first time UFC viewers, there may be no greater introduction to the sport than seeing two talented and athletic monsters like Velasquez and dos Santos scrap in the Octagon. As UFC President White expressed, with these two in the cage, whether the fight goes 30 seconds or 30 minutes, it will be very exciting, especially with a belt hanging in the balance.