"I plan on applying my gameplan and hopefully get a knockout. I think I can knock him out.” - Aaron Simpson 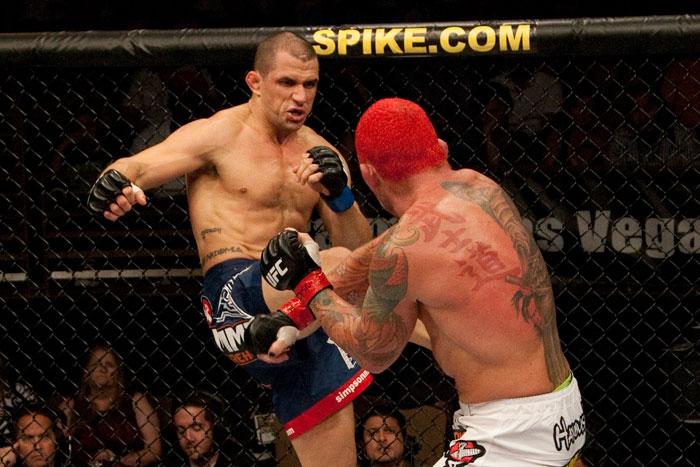 The meat-eating Aaron Simpson racked up a 6-0 record; the vegetarian Aaron Simpson has fared just 1-2. Friends of the UFC middleweight have suggested there might be a connection between the meat-free diet and Simpson’s recent struggles inside of the Octagon.

“Guys have given me that crap,” the Arizonan, one of MMA’s most prominent non-meat eaters, alongside vegans Jon Fitch and Mac Danzig, said dismissively. “They all say that. But I feel great.”

Simpson, whose wife is a longtime vegetarian, explained the clincher for his conversion roughly 18 months ago.

“I read a book called ‘Eating Animals’ that changed my thoughts,” he said. “And I’m an animal lover. I couldn’t justify what I was eating any more by the way meat is factory produced now and full of hormones, the way the animals are killed, it really turns me off. Cancer and heart attacks are the highest they’ve ever been and I really think it’s our environment and a lot of the things we eat and ingest.”

With Brazilian jiu-jitsu ace Mario Miranda up next at UFC Fight Night 24 in Seattle, Washington this weekend, Simpson believes he has corrected the factors that sabotaged his success – and he’s confident vegetarianism has been an enhancer to his performances, not a detriment. Disappointing losses to Mark Munoz and Chris Leben came on the heels of a triple whammy of injuries, training camp instability and hesitation at punching a friend too hard in the face.

“I was psychologically holding back in my fight with Mark,” Simpson said. “I really didn’t want to hurt Mark. I know him and his family. It was weird … I’m really disappointed in my last two losses. I felt like it wasn’t me out there. I promise to change that this fight.”

Simpson said he is healthy for the first time in a long time. Last year – after a business spat -- he, Ryan Bader, CB Dollaway and other teammates were forced to train at MMA academies throughout the Arizona area, with no consistent home. Simpson also journeyed to San Jose, California to train with the American Kickboxing Academy. But those nomadic camps are no more for the married father of twin toddlers since Simpson, Bader and Dollaway recently opened a state-of-the-art MMA and fitness facility in Phoenix in collaboration with NBA veteran Mike Miller, a 3-point specialist who plays for the Miami Heat.

“I’ve had a full training camp at home,” Simpson said. “It’s been nice. I finally feel like I’ve done the right things for this fight with this camp. The last eight weeks all I’ve had to do is focus on Mario Miranda.”

The 31-year-old Miranda, a Brazilian jiu-jitsu black belt currently training in Seattle, has demonstrated knockout power. Six of the Brazilian’s 12 wins have come via TKO.

“He’s going to be tough for me. He’s got that BJJ background, which is always hard to beat,” Simpson said of his 6-foot-4-inch opponent. “He’s tall, which is something else I have to deal with. But I plan on applying my gameplan and hopefully get a knockout. I think I can knock him out.”

Simpson boasts heavy hands, as evidenced by his six knockout victories. In the takedown realm, Miranda could have his hands full; Simpson’s resume is overflowing with high-level wrestling accolades. In high school he accumulated a spectacular 142-1 record. In college, he was a straight-A student at Arizona State University who graduated with a degree in journalism. Twice he earned Division I All-American wrestling honors at ASU. After college he twice placed at the U.S. Olympic Trials. It was in 1999, while competing in the world team trials, that Simpson first visited Seattle.

“I loved the city,” he said. “My wife and I are actually staying an extra day so we can see the city and celebrate the victory.”

Simpson also spoke about Anthony Robles, the ASU 125-pounder who inspired millions last week when he convincingly won an NCAA wrestling title despite being born with one leg.

“I love that kid. He’s one in a billion,” Simpson said. “I actually saw him today, he came to the gym and we had a good conversation. Just knowing that kid will change your life. I actually coached him his freshman year, his redshirt year. He runs with the team, goes up and down the mountains running on crutches – it’s like a mile up.

“When he was in high school I wrestled with him. He’s unbelievable. He’s a freak. He’s got amazing strength. The guy in the finals (Iowa’s second-seeded Matt McDonough) had never wrestled him. The first time, it just shocks a lot of people. It’s a very different feel.”