Read on for the latest installment in UFC.com's weekly series of articles on proper nutrition from the biggest names in mixed martial arts...this week, Aaron Simpson 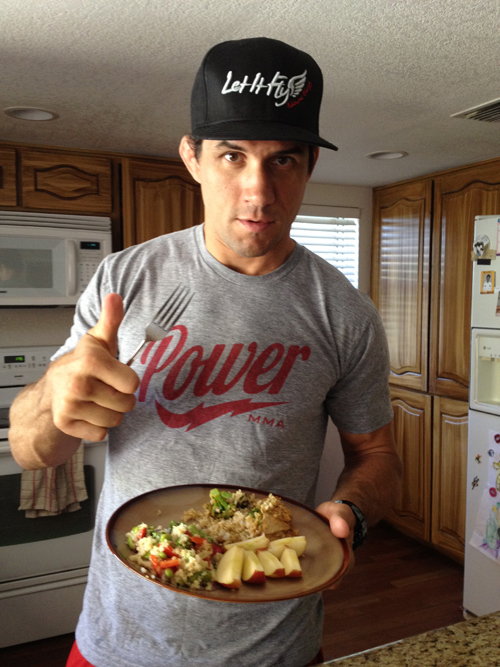 Imagine this: It’s 2 a.m. and Joe Silva is wide awake reading a book in the basement of his home. Suddenly an epiphany strikes, causing the UFC matchmaker to instantly thrust aside his book, and begin scribbling intensely on a nearby notepad.

Silva writes: “Jon Fitch vs. Aaron Simpson … Vegetarian vs. Vegetarian. First time in history two vegetarians have collided inside the Octagon! (I love it!!!).”

Pulse racing, he calls Dana White to tell him the news.

Ok, ok, so that’s not really how the Battle of the Veggenites came to be. After all, what does Silva care that neither Fitch nor Simpson has eaten a burger in years? But the author of UFC.com’s nutrition stories sure as heck cares about it. Which is why I darn near shed a tear when Fitch was scratched from the UFC on Fuel TV 4 card (July 11), spoiling one of the more original angles for this column. But alas, I was able to catch up with Aaron “A-Train” Simpson to at least have the 37-year-old Arizonan discuss the new diet he has enacted as he drops to the 170-pound category for the first time since high school. The former Division I All-American wrestler also talks about how he transformed from hamburger lover to outspoken vegetarian and animal rights advocate.

Curreri: What was the turning point for you to convert to vegetarian?
Simpson: The turning point was me and my wife having kids four years ago. My wife has been vegetarian for almost 10 years now and we had discussed raising them vegetarian or vegan. That was big because I wanted to raise them to have a passionate upbringing to where they will value all life. So I couldn’t justify being different around the house. Because of how I feel about animal rights and the cruelty that is done to animals out there every day, I felt like it was up to me to be a role model to my kids. I just had to decide who I wanted to be for my kids.

Curreri: So the last time you ate meat was over four years ago …
Simpson: The last thing I gave up was chicken because everyone kept saying that ‘as an athlete you need animal protein in you’ and all that stuff. We hardly had red meat around my house, so for three years I chicken was really the only meat I ate. Then one day I just woke up and said, ‘I don’t think I can eat chicken anymore.’ I had seen some documentaries and read some books about the way they are abused, the way they are bred and it disturbed me. So I moved away from that.

Curreri: If we were to peek inside of your fridge or pantry right now, what would we see?
Simpson: Lots of fruits and vegetables. We’ve got hummus in there, tofu, veggie burgers, beans, rice, cucumbers, broccoli, green beans, bell peppers and kale. We do a lot of shopping at Whole Foods and Trader Joe’s. I have to stay away from carrots, peas and corns for (my weight cut) because they’re higher in starch and might interfere with my weight cut.

For this camp I’m moving more toward the vegan lifestyle. I’ve omitted Kefir, which is more of a dairy-based yogurt. You have to understand: Growing up I was a hamburger and French fries kid. I was real picky. I didn’t like anything on my hamburger … So these last couple of years I can’t believe some of the stuff that I enjoy eating. I never in a million years thought I would eat like this. But now, every morning when I wake up, that’s what I do. I drink a shake with Vegan protein from Brendan Brazier’s – he’s an Ironman Triathlete and vegan who has a line of products called Vega Sport. I use a lot of his stuff in my training. I put some bananas, apples, berries in with the protein, along with a green superfood and some granola. That’s close to 400 to 500 calories right there, and then I’ll head to training.

Curreri: You mentioned earlier that you are working with highly-regarded nutritionist George Lockhart for this camp (Lockhart, best known for engineering Kenny Florian’s weight cut to 145 pounds).
Simpson: The diet he gave me, a big part of it is what I do pre- and post-workout – where my glycogen levels are and making sure those are replenished immediately after the workout. And making sure my electrolytes are replenished during the workout. I’ve been drinking a lot more water than I ever thought I needed; I’m making myself drink two gallons of water a day. As a wrestler, I didn’t think about how important it is to drink that much water. I was probably lucky to get ¾ of a gallon a day. I wasn’t monitoring how much I drank. I would drink because I felt thirsty, but they say that if you wait until you feel thirsty it’s too late.

I’ll be drinking 2 gallons of water a day right up until the week of weigh-ins. I’ll be drinking a maybe a gallon-a-day five days out. I’m waking up at 188 pounds right now and I was between 196 and 200 maybe five weeks ago. I feel healthier and stronger and I’m not deprived in any way.

Curreri: Are you noticing any shift in attitudes toward vegans and vegetarians in the sport?
Simpson: Yeah, definitely. Even at my own gym. A lot of the macho stuff is out the door now, a lot of the ‘you gotta have meat on your plate stuff.’ You’re seeing people like Gray Maynard, Jon Fitch and Mac Danzig, and people like me, eating this way that are very successful at what they do. So obviously it’s not harming performance. It’s spreading knowledge out there: ‘As a high-level athlete you don’t have to eat animal protein.’

Curreri: We haven’t had a UFC champ who is vegan or vegetarian. If the day ever comes when a UFC champ is a vegan or vegetarian, what impact might that have on perceptions?
Simpson: It would help shed even more light on things and more exposure on people with beliefs like mine. But it’s not just MMA. More and more you’re seeing other athletes take on this kind of lifestyle. It would be nice to see someone break through that is well spoken and will make it known. For me it’s not just the diet. There are so many other things going on and it’s important to really spread the word and put that out there. It’s the way we’re farming the animals. The way they’re being pumped full of steroids and growth hormone and antibiotics. It’s not healthy for this society and not healthy for the planet.

Curreri: You are fairly outspoken about the beliefs that underlie your diet, and your advocacy against cruel and inhumane treatment of animals. What is fueling that outspokenness?
Simpson: Ummm… Anger (chuckles)! And maybe it angers other people that I talk like this. It bothers me when dolphins and whales are killed for big dollars. And there’s a huge Alaskan seal hunt … it just baffles me. Stuff like that angers me. And when I tweet it, I’ve been told that maybe I should calm down on tweeting that because it angers people… A lot of people want to bury their head in the sand and act like some of this stuff doesn’t go on. But everything is not great out there. And the more we’re able to put it out in the public then people will realize that it does happen.

But I’m not afraid to voice that. You know, a lot of people are very anti-PETA (People for the Ethical Treatment of Animals). You know, PETA is very extreme in what they do, but in a way they have to be. If you’re going to stand for something, you can’t half-ass it … so I feel like I’m making a small difference.

Curreri: You’re 37 years old and still competing at a high level. Have you given any thought as to how much longer you would like to fight? Are you gonna ‘ride it ‘til the wheels fall off’ or leave while you’re on top of your game?
Simpson: I think about it all the time, especially when you get home from a workout and your body is a little sore and beat up. But I’ve always taken care of my body and I’ve never really stopped training at a high level. I’ve trained and competed at a high level since I was 12 years old. So I hear that kind of talk from people that are my age or older … and they say, ‘Oh, he’s so old.’ It’s because they let themselves go. If they felt like I felt, if they were driven and hungry like I am, then they would understand. But they don’t see it through my eyes.

I just read a book by Dara Torres. Here she is, 45 years old and going for her fifth Olympics. At the end of the month she’s swimming in the Olympic Trials and she’ll probably make the Olympic Team, which is unheard of, especially at 45 years old. So I’m still hungry to do this, I’m still able to compete at a high level. And now that I’m cutting to welterweight – I probably should have done it years ago – I feel like I can beat any of those guys in the weight class. It’s just a matter of going out there and having great training camps. Now I’ve got a great coach in Tom Vaughn and a great situation and everything is really clicking right now. I was excited for the Jon Fitch fight, but I’m still excited about the fight with Kenny Robertson. Regardless of who I’m fighting, it’s a chance for me to showcase what I can do at 170 pounds. I’m going to be a different fighter there. Before I was always fighting guys that were 25 pounds heavier than me. That was always in the back of my mind, ‘What if this dude takes me down and just holds me down?’ My last fight (decision loss to Ronny Markes) I was 191 pounds the morning of the fight. So it’ll be nice to (finally) fight someone my size.