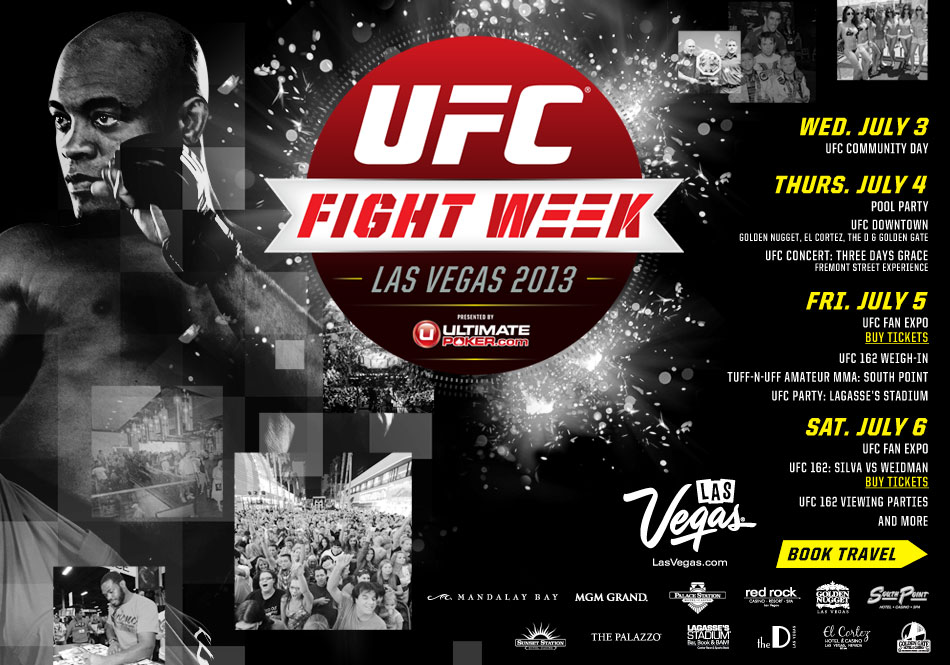 Las Vegas – The Ultimate Fighting Championship® (UFC®) and Las Vegas team up for UFC Fight Week™, presented by Ultimate Poker®, beginning July 3 and culminating with one of the biggest sporting events of the year, UFC® 162: SILVA vs. WEIDMAN, at MGM Grand Garden Arena on Saturday, July 6.

Ultimate Poker®, the exclusive online gaming partner of the UFC, is making history as the first company in the United States to offer legal and secure online poker. During UFC Fight Week™, fans will have the opportunity to participate in exclusive UltimatePoker.com tournaments with special UFC guests and prizes. Details about the tournament will be announced shortly at UltimatePoker.com and UFC.com/FightWeek.

“The UFC has always done a big Vegas show around Fourth of July weekend. Fans from all over the country, tons of people from Brazil and Canada, and as far away as Japan and Australia, are coming to Vegas to see UFC 162 and take part in Fight Week,” said Dana White, UFC president. “Las Vegas is the UFC’s hometown, it’s the fight capital of the world, and we’re proud to contribute to the local economy. The annual Fight Week event in Vegas is the ultimate week-long celebration for UFC fans around the world!”

“Two of the world’s most recognizable brands, UFC and Las Vegas, have developed a strong and successful partnership that delivers unrivaled excitement to millions of loyal fans around the world,” said Rossi Ralenkotter, president/CEO of the Las Vegas Convention and Visitors Authority. “Fight Week provides fans with unprecedented access to UFC stars and no destination matches the passion and energy like Las Vegas.”

Events for UFC Fight Week™ are included and linked in the poster above  Highlights are listed below.